Quick Guide to All Things Lentivirus

Viral vectors have been increasingly popular in fundamental and applied research since their first use in the early 90’s to genetically modify primary cells. Amongst the different vectors used, lentiviral vector constructs have proven very useful due to their ability to infect both dividing and non-dividing cells, including stem cells. These properties make lentiviral vectors fantastic options for delivering shRNA, CRISPR/Cas9 components, and fluorescent sensors.

Until the development of viral vectors, gene transfer into mammalian cells often relied on chemical (CaCl2, cationic liposome) or electrical (electric current forming membrane pores) transfection. These techniques are still used and efficiently transfer plasmid DNA efficiently into dividing immortalized cells lines but reach their limits when it comes to transferring DNA into primary cells or non-dividing cells. To target these un-transfectable cells, labs use viral vectors and particularly retroviral vectors because they target a broader range of cells and their integration into the genome is more efficient.

The first retroviral vectors used were derived from the Moloney Murine leukemia virus (MoMLV) and consisted of two plasmids: the packaging plasmid containing all the structural genes necessary for the production of a viral particle (Gag, Pol, Tat, Rev and Env) and the transfer plasmid encoding the insert of interest as well as sequences necessary to encapsulate that insert into a viral particle (the packaging signal Psi). Because the packaging plasmids lacked the psi signal, the genes encoding the structural proteins could not be integrated into the new viral particles and the virus particles produced could not replicate. However, Mother Nature found a way to re-create a functional virus. Indeed, by testing several vectors and packaging cell line combinations, Miller et al. showed that infectious wild-type viruses were produced in high-titer retroviral stocks generated by the transfer of a retrovirus into the packaging cell line PA12 (containing the psi deletion). A double crossover event between the vector plasmid and the packaging plasmid caused the Psi sequence to be placed on the packaging plasmid forming a vector that could create replication competent virus. Even though this system was efficient at transferring the gene of interest to the appropriate cells, it was obvious that its safety was a disadvantage particularly for clinical development. In addition, MoMLV is inefficient at infecting non-dividing cells and so researchers set out to create a better, safer system.

Unlike the MoMLV, lentiviruses, a separate genus of the Retroviridae family including human immunodeficiency virus type-1 (HIV-1), can infect both dividing and non-dividing cells. The ability to infect non-dividing cells is not restricted to in vitro cell culture as lentivirus-derived vectors are capable of transducing certain quiescent or terminally differentiated cells such as macrophages and microglia. This property makes the lentivirus an attractive choice for a gene transfer vector. 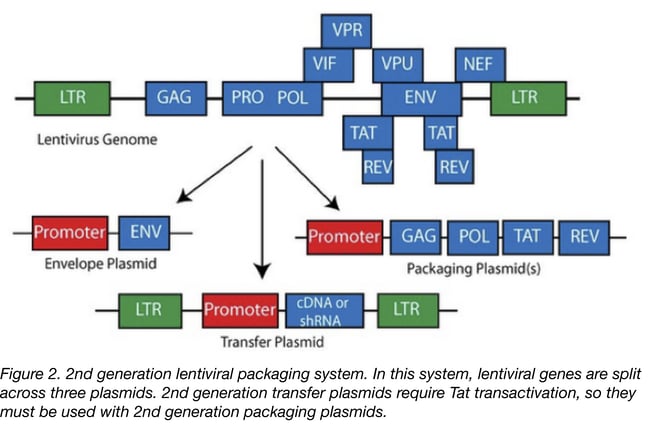 Regarding transduction efficacy, no differences between the 2nd and the 3rd generation of vectors have been shown. However, with the 3rd generation you get lower viral titer than with the 2nd generation. Knowing this you can scale up your production set-up and purify and concentrate your lentiviral particles to get them to the optimum concentration to infect your cells of interest.

The transfer plasmid is the vector you clone your gene of interest into and is an important feature for your experiment; it must be chosen carefully. Often researchers want a simple set-up where the gene of interest is expressed together with a marker (Fluorescent protein or selection marker) allowing for selection of the transduced cells. In this case your gene and the marker can be separated by an internal ribosome entry site (IRES) and expressed under the same promoter. Alternatively, your gene and the marker can be placed under the control of two different promoters. Both the single and dual promoter transfer vectors can be used to express your gene of interest either constitutively or inducibly. If your gene of interest is toxic or needs to be expressed a certain point in the cell cycle, a transfer vector with an inducible promoter (see below) should be used.

The most widely used inducible lentiviral vector system is the tetracycline (Tet)-regulated system. You can choose either the Tet-off system or the Tet-on system. In the Tet-off system a Tet-response element (TRE) is placed upstream of the promoter in your transfer vector. In the absence of tetracycline or a derivative such as Doxycycline (Dox), the Tet-controlled transactivator (tTA, also expressed by your transfer vector) binds to the TRE and activates the expression of your gene. The addition of Dox in the culture will then repress your gene of interest. This system is efficient but you have to be aware that there is often  background activity and it requires continuous administration of Dox to repress transgene expression. In contrast, in the Tet-on system, tTA has been modified (and renamed rtTA) to bind TRE only in presence of Dox. In this case, your gene is repressed in steady state and is expressed when Dox is added to the culture. This system is now used as it shows rapid gene expression kinetics as compared to the Tet-off system. One drawback of the Tet system is that it often requires the delivery of two distinct expression vectors to target cells - one containing the gene of interest (pTet-IRES-EGFP, pPRIME-Tet-GFP-FF3) and one with either tTA or rtTA (FUW-M2rtTA). In this kind of approach, a population of cells might express only the tTA or your transgene resulting in low inducibility and potentially making it difficult to interpret your results. This can be a bottleneck for your experiment. Single vector systems containing both your transgene and tTA/rtTA (pINDUCER20, pINDUCER21) have been developed, but these vectors are quite large and you might get lower viral titer when using them.

Regarding biosafety, it is also important to be aware that lentiviral particles are a powerful way to transduce cells - even your own! You should therefore be cautious about inserting potentially harmful genes into a transfer vector. Lentiviral particles expressing proto-oncogenes or oncogenes for instance should be manipulated with care. See the NIH’s biosafety guidelines for more information and always be sure to consult your institution’s Biosafety Committee before beginning any work.

Once you have cloned your gene of interest into lentiviral transfer vector, the next step is to produce the viral particles themselves. For this you will first need to transfect producing cells, usually 293T cells, with your transfer plasmid and your packaging plasmids. For this, you can use the transfection reagent you are most comfortable with. If you don’t have any experience in transfection, CaCl2 transfection is a simple and cheap technique that should work well.

Quickly after transfection (4-8h), cells start releasing viral particles into the culture supernatant and you can generally harvest the supernatant containing viruses 24h after transfection. This supernatant can be stored at 4 °C or can be directly added to your target cells. However in that case you don’t know how many viral particles you put in your culture. As viral production can change from one batch to another. For experimental consistency it’s a good idea to purify and titer your virus. Virus purification can be a tricky process. You have to centrifuge the culture supernatant in order to precipitate the viral particles. Some protocols suggest adding sucrose to the supernatant to create a gradient of density that favours virus precipitation. My tip for this process is to test several protocols that have been described (protocol 1, protocol 2, protocol 3) to find the one that will give you the best production for your system.

Once purified, you must titrate your viral particles to determine their concentration. Three methods are broadly used for virus titration: the p24 ELISA dosing method detects the expression of viral capsid antigen p24, the FACS dosing method correlates viral titre to the number of cells transduced by a GFP encoded virus, and the reverse transcriptase activity assay uses qPCR to quantify viral RNA. All of these methods have been described in a previous Addgene blog

Once you know your viral titre, you can incubate your cells with virus at different multiplicity of infection (MOI=ratio of virus to cells). Again, my tip here is to test several protocols as the set-up depends on the type of cell you would like to infect. Most of the protocols you will find will recommend using a polycation, like polybrene (protocol) or DEAE dextran (protocol), which help the viral particle bind to your target cells. If you are transducing non-adherent cells you might need to centrifuge your cells with the virus in order to aid viral binding. This method, called spinoculation, has been found very effective for T cells transduction for instance.

I hope you will find this information useful for your experiments. Don’t hesitate to check our lentiviral vector guide to get more information and to get access to additional protocols and plasmids.