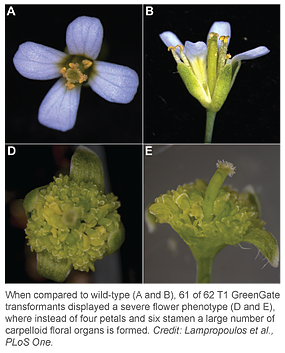 A few years ago, researchers introduced what’s been called a major breakthrough in cloning technology with the Golden Gate method. For the first time, it was possible to quickly and efficiently assemble a large number of building blocks with just two or three inexpensive enzymes. Now, a new toolkit - aptly named GreenGate – offers all of those same advantages to researchers working in plant model systems.

“The cloning is all done in vitro; it’s no different in mouse, human or plants,” explained Jan Lohmann of Heidelberg University. “What is different is the plasmids you use to bring this into your target organism. We have designed a Golden Gate system based on the daily needs of an advanced molecular plant science lab.”

As Lohmann and his colleagues describe in the PLoS ONE paper that introduced the kit in December, GreenGate includes the six most frequently used elements in plant expression cassettes: plant promoters, N-terminal tags, coding sequences of the gene of interest, C-terminal tags, plant terminators and resistance cassettes for selection of transgenic plants. The complete GreenGate toolkit, now available at Addgene, also gives the option to stack several expression cassettes onto a single T-DNA in subsequent rounds, dramatically reducing the time required to generate multi-construct transgenic plants.

In the most practical terms, what GreenGate can do is “save you half a year,” in comparison to more tedious and time-consuming traditional cloning methods, Lohmann said.

The key component of Golden Gate and GreenGate are type IIS restriction endonucleases. They are like other endonucleases except that they cut at arbitrary sequences a defined distance away from the recognition site. In other words, cutting and recognition are independent.

“They see one sequence and cut another,” Lohmann said. “It allows us to design modules that always have the same recognition site but distinct sites where the enzyme will cut. You only need a single enzyme to cut fragments that are very different.”

Because the fragments produced will have different overhangs, they can be designed such that they go back together only one way and in a single tube. (Additional details on the GreenGate kit and how it works are available here.) Although Lohmann said they’ve only tested GreenGate in Arabidopsis, it should in principle work in any plant species.

Tricks of the trade

Lohmann does have one special tip for anyone looking to try this at home in their own lab: be very careful with the type IIS restriction endonuclease of choice, BsaI, which can be very sensitive to temperature fluctuations. He says their lab learned the hard way after the cloning method, which had been humming along at 99 percent efficiency, simply stopped working. They finally traced the problem back to the endonuclease.

“It’s just a sensitive protein,” he says. “There is nothing you can do about it but be gentle. If it no longer works, just trash it.”

Lohmann and his colleagues including Joachim Forner now expect and hope that other labs will get busy with GreenGate, producing and contributing more modules into the public domain in the process.

“We had several motivations for making GreenGate available through Addgene,” Lohmann said. “We strongly believe the free sharing of material is absolutely essential for scientific progress. Also, the more people use such a system, the more building blocks will be available, making it easier for us to do our work.”