Adenoviral vectors (AdV) are attractive vectors for research applications and gene therapy: they can be produced at high titers, can accommodate large transgenes, transduce quiescent and dividing cells, and do not integrate into the host’s genome. The main challenge with using AdV is that it triggers a strong immune response after in vivo administration, which results in the death of transduced cells and loss of transgene expression (Interestingly, the strong immunogenicity of AdVs is what makes them ideal candidates for applications in oncolysis and vaccination!)

In the 65 years since its discovery, researchers have done significant work to improve the Adv genome’s utility in research and its therapeutic potential.

Note: constructs discussed are based on Adenovirus type 5.

The adenovirus virion is a non-enveloped particle of ~100 nm, consisting of a capsid surrounding an inner core which contains the adenoviral genome. The genome itself is a linear double-stranded DNA of ~36kb, with inverted terminal repeats (ITR) present at both ends.

1st Gen AdVs are stripped of regulatory genes E1 and E3. Without these genes, AdVs cannot replicate on their own but can be produced in E1-containing mammalian cell lines such as HEK293 cells. 1st generation AdV cloning capacity is limited to 8.2 kb, and in vivo transgene expression ceases relatively quickly due to immune response against AdV. Importantly, recombination-competent adenovirus (RCA) can be generated if the E1 gene from the packaging cell line is transferred into the AdV by recombination. It is therefore recommended to test for the presence of RCA in the viral stock by doing a plaque formation assay on A549 cells . Alternatively, antibody-based assays are commercially available for faster detection of RCA.

2nd Gen AdVs were designed to have increased cloning capacity, decreased  potential for the generation of RCA and reduced immunogenicity. In addition to E1/E3, non-structural genes E2 and E4 are deleted in 2nd generation AdVs, thereby increasing cloning capacity to ~12 Kb. The ever popular pAdEasy system belongs to this category.

3rd Gen AdV (Gutless or high capacity AdV) are devoid of all viral coding sequences and retain only the ITRs and packaging signal in cis. Therefore, co-infection with a helper adenovirus is required to provide the viral proteins in trans. The Gutless AdV have generated high interest for gene therapy due their increased cloning capacity (up to 36 kb!), long-term transgene expression and negligible toxicity. However, their production is more complex and the presence of helper virus contaminants have slowed the use of this system. New and improved systems are still being developed. A detailed protocol for production of Gutless AdV can be found in reference 3. 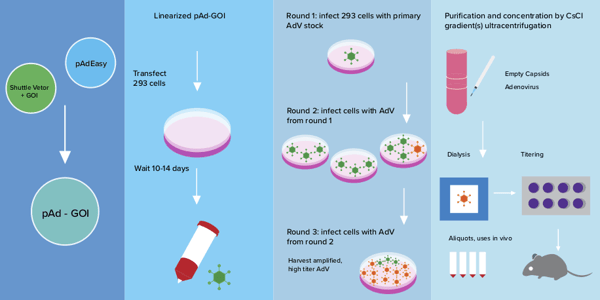 AdV Production in HEK293 cells can be broken down into 5 key steps:

You're now ready to use your purified, high-titer rAdV in your experiment. Enjoy!

2. He TC. et al. A practical guide for using the AdEasy System.