By Alyssa Cecchetelli and Lukas Morgan

Model organisms are vital tools used by researchers around the globe. These organisms share many genes with humans, are easily maintained in the lab, and have short generation times that make it easy to study the effects of genetic manipulations. In this blog post, we’ll cover five popular model organisms, but there are many more out there.

Let’s start with the most preferred mammalian model organism of many researchers: the mouse (Mus musculus). Mice have many advantages as a mammalian model organism for scientists as they have a relatively short generation time for mammals - the time between being born and giving birth - of about 10 weeks. Adult mice reproduce as often as every three weeks so scientists can simultaneously observe several generations of mice at a time.

Because mice are more genetically and physiologically similar to humans than many other model organisms, they are often used to study human diseases. Diseases in mice show many similar phenotypes to human diseases and have successfully helped researchers develop a variety of therapies. For example, many scientists use mice to study diseases such as cancer since mice better recapitulate the complex interactions between cancer cells, therapeutic drugs, and the rest of the body than studies in other model organisms or cell culture. For example, Scott Lowe’s lab utilized mice to study how different mutations in leukemia impact different treatment regimens (Zuber et al., 2009). By injecting mice with retroviral vectors that harbored different mutations found in leukemia, the Lowe lab was able to identify a set of mutations that made cancer cells more resistant to chemotherapy. You can find these plasmids at Addgene.

Another advantage of mice as model organisms is that they are genetically tractable. Mice can be easily manipulated with tools like CRISPR to make transgenic lines. 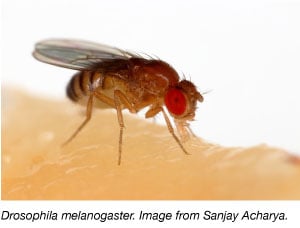 Another popular model organism is Drosophila melanogaster, or as it is more commonly known: the fruit fly. The fruit fly has been used in scientific research for over a century but was brought to the forefront by Thomas Hunt Morgan, who is known as the “father” of Drosophila research. Morgan discovered that genes were found within chromosomes using the fruit fly far before we even knew that DNA was genetic material (Jennings, 2011).

The fruit fly makes a great model organism because they are easy and inexpensive to grow and maintain in the lab, have a short life cycle of 8 to 14 days, and produce a large number of offspring that are laid externally. Fruit flies are also relatively straightforward to manipulate genetically. Scientists can make a new line of flies in only 6 weeks compared to months to make a transgenic mouse line. Over the years the fly has become an ideal model organism to study an array of topics including development, genetics, and the nervous system. The fly has also emerged as an important human disease model with potential for therapeutic drug discovery as it is estimated that 75% of disease causing genes in humans have a functional homolog in the fly (Pandey and Nichols, 2011).

A huge advantage of using the fruit fly is the array of genetic tools, such as the GAL4/UAS and LexA system, that allows scientists to easily control the level and spatiotemporal expression of a gene of interest. This type of control over gene expression is possible in other model systems but can be quite difficult and time consuming. GAL4/UAS was first described in 1993 by Norbert Perrimon’s lab and has been continuously improved upon since then. If you are interested in these systems check out Gerald Rubin’s lab who created a set of modular vectors that can be used to optimally control gene expression in specific cells of the fly (Pfeiffer et al., 2010). 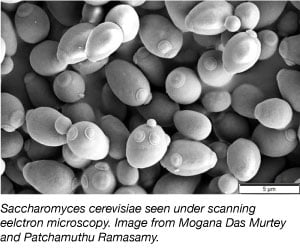 Yeast, one of the simplest eukaryotic organism, is a commonly used model organism in scientific research. Yes, the same kind we use in breads and other baked goods! Yeast is cheap, simple and easy to work with as they can survive in a variety of environmental conditions, and double every 2 hours. Yeast are also the first eukaryotic genome to be entirely sequenced and is very amenable to genetic manipulation.

Yeast cells are great model organism not only for the reasons above but because they actually share many biological properties and processes with our own cells. Like human cells, yeast DNA is packaged into chromosomes and about 23% of yeast genes have a counterpart in humans (Liu et al., 2017) . Thus yeast can be used to study the molecular basis of human diseases that are caused by a specific gene. For example, several genes mutated in human cancers have a homolog involved in yeast cell division (Pray, 2008). Scientific discoveries in yeast can then can be further studied in other model organisms that better recapitulate in vivo conditions similar to humans.

For example, due to their simplicity, yeast have become an important experimental model in the study of neurological diseases, such as Parkinson’s disease (PD). PD is primarily characterized by protein misfolding that leads to a build-up of protein aggregates termed “lewy bodies” in the brain. Yeast models of PD, like those that overexpress the toxic protein α-synuclein (the most common protein found in lewy bodies), have been invaluable in understanding the basic molecular mechanisms underlying the disease (Menezes et al., 2015). As yeast are unicellular organisms, they can also be used to easily screen multiple therapeutic compounds in one experiment.

Since the 1960s, the zebrafish has gradually become an important model organism. They share about 70% of their genes with humans and 85% of human genes associated with a disease have a homolog in zebrafish (Howe et al., 2013). Zebrafish are small, easily maintained as they are housed in large groups, easily bred, and produce 50-300 eggs at a time. Zebrafish embryos are also laid and fertilized externally, allowing scientists to easily manipulate them. Scientists can simply inject one-celled embryos with DNA or RNA to edit their genomes or to create transgenic animals.

For example, the Stainier lab studied the proliferation and differentiation of β-cells in the the developing zebrafish pancreas. They first tagged these cells using plasmids. Then using HOTcre, a method that uses heat induction to control the temporal expression of different transgenes, the Stainer group determined that there are actually two distinct populations of β-cells that originate in different regions of the pancreas and produce different levels of insulin (Hesselson et al., 2009). 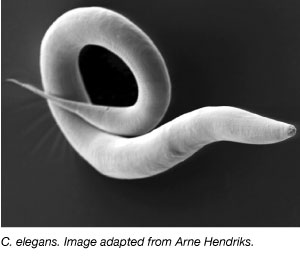 The worm, Caenorhabditis elegans, has been used extensively as a model organism since the 1970s when Sydney Brenner brought it into the lab to study neuronal development (Brenner, 1973). C. elegans are small, transparent worms that have a rapid life cycle and large brood sizes. The majority of C. elegans are also self-fertile hermaphrodites making it easy to conduct large experiments over multiple generations. Similarly to other model organisms, the C.elegans genome is also completely sequenced and over 60% of human genes have an ortholog in C. elegans making it ideal to study basic molecular biology processes.

C. elegans are also quite amenable to genetic manipulation. Transgenic animals can be made by simply micro-injecting DNA into the worm, such as animals that express fluorescent markers (Mello et al., 1991). Genes can also be easily knocked-down through RNA interference (RNAi) by feeding the worm bacteria expressing specific plasmids (L4440) that contain your gene of interest (Fire et al., 1998). The discovery of RNAi in the worm actually rewarded depositors Andrew Fire and Craig Mello a Nobel Prize in 2006.

One of  major advantages of C. elegans is that they are transparent throughout their lifetime. Thus any genetic modification, such as expression of fluorescent protein or disruption of a gene, can be easily visualized in a living organism from embryonic development to adulthood. This ability to genetically manipulate and visualize cells and tissues allows scientists to conduct in vivo studies which can be quite difficult in other model organisms. Worms have been used to investigate an array of biological systems and processes including the nervous system, development, cell signaling, aging, and mechanotransduction to name a few. For example, Andrew Leifer’s lab utilized the worm to study calcium signaling in the entire adult brain, using a plasmid that expresses a genetically encoded calcium sensor, GCaMP6 (Nguyen et al., 2015). If you are interested in C. elegans plasmids and resources check out Addgene’s Worm Expression page.