Members of the bacterial world produce an assortment toxins to claim territory or kill competing microorganisms, but did you know bacteria also produce substances toxic to themselves?

What are toxin-antitoxin systems?

These toxic substances are part of toxin-antitoxin systems that are widely present in bacteria. They consist of a toxin which can affect a variety of cellular processes and an antitoxin that suppresses the toxin’s activity. The key to these systems is that the toxin is stable while the antitoxin is unstable, meaning that the cells must continually produce antitoxin to avoid cell death.

In the case of plasmids, toxin-antitoxin systems act as “selfish” pieces of DNA whose sole purpose is to ensure the propagation of themselves and their associated genes. These systems better ensure that plasmids are passed down through generations (Figure 1). These so called “plasmid addiction systems” require dividing cells to retain plasmids - if a cell does not inherit plasmid due to improper plasmid partitioning, it will still inherit some toxin and antitoxin. However, the antitoxin will be degraded leaving the cell to be killed by the more stable toxin. Cells only survive if they retain the plasmid. 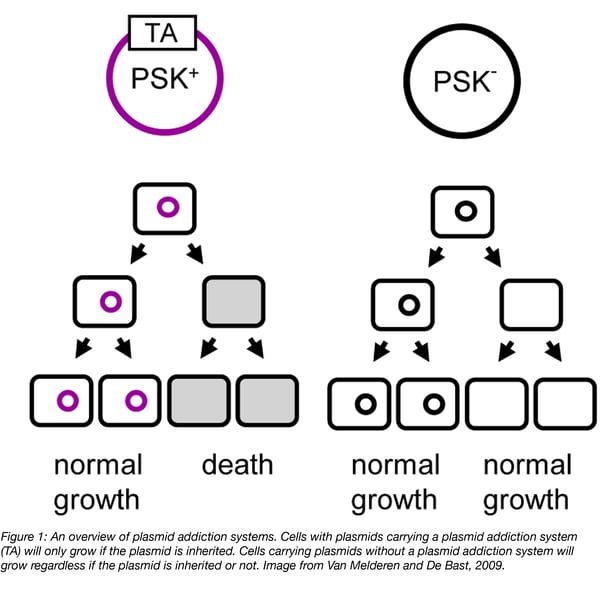 The discovery of toxin-antitoxin systems

Toxin-antitoxin systems were first discovered in 1983 when Teru Ogura and Sota Hiraga found that if a mini-F plasmid carried a specific 700 bp segment of DNA, the plasmid was propagated better than plasmids without this DNA.

They eventually designated this fragment as the ccdB region (for “coupled cell division”). The encoded toxin-antitoxin system consists of CcdB (toxin) and CcdA (antitoxin) where CcdB inferes with DNA replication by binding the GyrA subunit of DNA gyrase and trapping it in the cleaved complex. This results in DNA breakage and cell death. Conversely, CcdA binds to and blocks the activity of CcdB.

Applications of ccdB in plasmid cloning

Perhaps the most widely used application of CcdB is GatewayTM cloning, where the ccdB gene serves as a counterselectable marker in the destination vector. Successful cloning occurs when the ccdB gene is replaced by the gene of interest. As a result, cells that retain the ccdB gene die off and a higher percentage of transformants contain the ccdB-less construct.

Other toxin-antitoxin systems and their applications

Aside from CcdB/CcdA, there are many protein-based toxin-antitoxin systems. One of the most well known protein-based toxin-antitoxin system is MazE/MazF. The toxin MazF is a ribonuclease that cleaves specific sequences in RNA resulting in a blockage of protein synthesis. The antitoxin MazE, which binds and inhibits MazF, is continually cleaved by the ClpAP protease so without continual production of MazE, the toxin becomes active.

Shen Yang’s lab made use of mazF as a counterselectable marker to create unmarked genetic modifications in the yeast Pichia pastoris. By combining both positive and counter selection in one plasmid, they were able to create an efficient cloning tool. The plasmid pKSCTMF contains the mazF gene and a gene for Zeocin resistance (Figure 2). This MazF-ZeoR cassette is flanked by two direct repeats which can be used for marker removal so that the marker can be reused to introduce multiple genetic modifications in the same strain. MazF expression is under control of the AOX1 promoter whose expression is induced by methanol. Once linearized, the delivery vector can be integrated into the genome to introduce the genetic modification(s) contained within it by selecting for Zeocin resistance. Then, counter-selection with methanol medium selects for those cells that have removed the cassette through a second recombination event between the two flanking repeats. In cells where recombination has not occured, methanol induces the production of the toxic MazF leading to cell death. The team used this cassette to knock out genes, knock in a GFP cassette, and introduced site-directed mutations, all without introducing unwanted selection markers.

The hok/sok system is the first antisense RNA-regulated toxin-antitoxin system discovered. Unlike the systems just described, the hok/sok systems consist of three components:

Here, Mok and Hok translation is coupled. Translation from the Shine-Dalgarno (SD) sequence of mok results in translation of Mok and Hok, triggering cell death. However, the sok antisense-RNA binds a sequence downstream of the mok SD resulting in a double stranded RNA structure that is recognized and cleaved by RNaseIII resulting in cell survival. 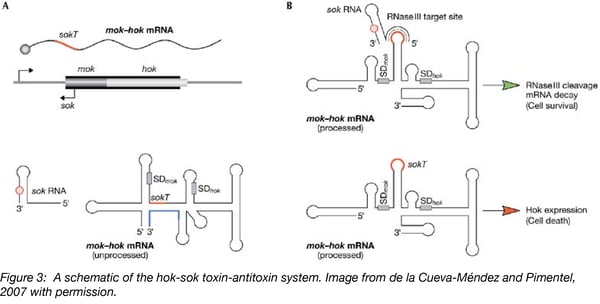 Plasmid addiction systems can be great additions to constructs that are used to drive high protein expression in vivo. Expression plasmids are often lost without plasmid addiction systems. For example, Cara Morin and James Kaper used the hok/sok system to create strains that can stably express antigens in sufficient quantities to generate an immune response. As a proof of concept, they tested a lux-mediated bioluminescence reporter in vivo in the absence of selective pressure and found that plasmids were maintained at 100% stability after five days.

Jeff Hasty and Sangeeta N. Bhatia also used the hok/sok toxin-antitoxin system to construct a stable synthetic gene circuit that can be used over prolonged periods. Using a plasmid carrying the hok/sok toxin-antitoxin system, they were able to monitor lacZ activity over 48 hours in vitro without antibiotic selection. In a subcutaneous cancer model, the researchers showed that after 24 hours, the unstabilized plasmids were retained in less than 10% of cells while plasmids containing the plasmid addiction system were retained in 75% of cells. They were able to apply this system as an orally administered diagnostic that can indicate the presence of liver metastasis by producing a detectable signal in urine.

While selfish in nature, these systems have been adapted by researchers for many uses when plasmid retention without selective pressure is necessary or for long-term experiments. They’ve also helped researchers design and optimize cloning methodologies using counterselection. Since their discovery, plasmid addiction systems have become a powerful tool to address a diverse set of biological inquiries.