This post was originally written by Tyler Ford in 2018. It was updated by guest blogger Abhi Aggarwal in 2022. 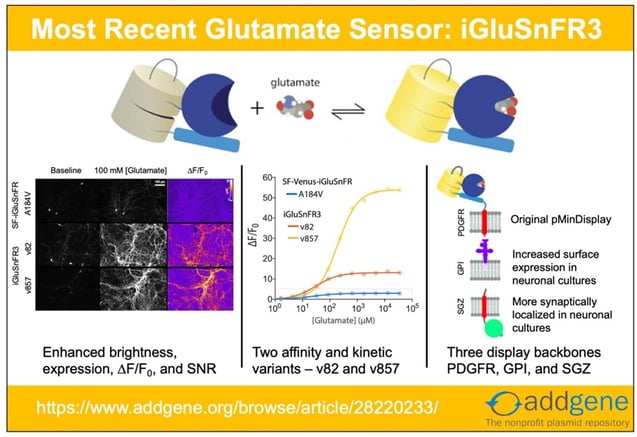 Recent updates to iGluSnFR and SF-iGluSnFR have made it clear that it’s time to update our iGluSnFR post! Here, we look at the origins of the system and explore advances that have happened since our original 2018 blog post.

iGluSnFR was developed in 2013 by Loren Looger’s lab at HHMI Janelia Research Campus to give researchers the ability to monitor glutamate release from neurons and other brain cells in vivo. Glutamate plays a variety of roles in synaptic communication and can trigger other forms of neuronal signaling and regulation.

To create iGluSnFR, the Looger lab wedged GFP between two halves of a bacterially derived periplasmic glutamate binding protein known as GltI. When the resulting fusion protein binds to glutamate, conformational changes lead to an increase in fluorescence intensity from the inserted GFP. After characterizing iGluSnFR in vitro, showing that it is selectively activated by glutamate, and tweaking it to improve its responsiveness, they showed that iGluSnFR could detect neuronal activity in C. elegans, zebrafish, and mice.

However, the first two generations of iGluSnFR had limitations: they were not optimal for experiments requiring high signal to noise ratios, imaging of high frequency glutamate signaling events, and accurately differentiating between synaptic vs. extrasynaptic glutamate release. Building on the previous generation of the SF-Venus-iGluSnFR (itself an improvement over iGluSnFR), Kaspar Podgorski’s lab have recently made iGluSnFR3 variants that are more sensitive and better localized for synaptic glutamate response than its predecessors. The detailed characterization of the new variants is available here.

To improve upon the SF-iGluSnFR, the researchers did the following:

The improved variants of iGluSnFR3 have higher expression levels and produce stronger fluorescent signals upon sensing glutamate using both 1-photon and 2-photon imaging.

The yellow (v82) and lime green (v857) versions can be summarized quickly as:

which are illustrated in figures 2 and 3.

The original iGluSnFR in the pMinDisplay backbone is fused to a specific peptide segment (PDGFR TMD) that anchors the sensor to the membrane and displays it on the extracellular side. In addition to the original PDGFR TMD, the researchers introduce iGluSnFR3 in two additional anchoring domains – GPI and SGZ.

Using iGluSnFR3 in your lab

The new iGluSnFR3 variants should enable scientists to robustly detect signaling events in the brain and beyond.

These new iGluSnFR3 variants come in AAV packaged virus aliquots being deposited at Addgene. Other plasmids and pAAVs can be ordered directly from Addgene. The Podgorski Lab has provided a brief breakdown of the promoter systems you can use to express the iGluSnFR3 variants:

iGluSnFR3 AAV packaged viruses can currently be obtained by contacting Abhi Aggarwal (abhi.aggarwal@alleninstitute.org) or Kaspar Podgorski (kaspar.podgorski@alleninstitute.org.) We will update this blog post when the deposit is complete.