Using CRISPR/Cas9 to Edit Disease Out of the Genome

This post was originally written in 2014 by Kendall Morgan and updated in 2022 by Lucie Wilson. Lucie is an Addgene co-op from Northeastern University.

There can be no doubt that CRISPR/Cas9 technology has been a breakthrough for the genome-editing field. It has the possibility to treat human genetic diseases, and several treatments are currently being tested in clinical trials. It is speeding the process of the discovery/development of genetic targets and RNA therapies. [6]. In 2014, we wrote a blog post on CRISPR’s potential for monogenetic diseases, the bulk of which you can find below.

Troy Rohn and his lab are researching a way to treat AD using CRISPR/Cas9. They are targeting the genes responsible for both early onset and late onset AD. In this study, the group showed that CRISPR/Cas9 could be used to edit several autosomal-dominant mutations that have been connected to the early onset of Alzheimer’s disease, as well as those that play into late onset AD (5). 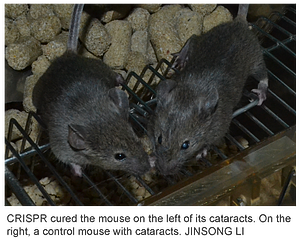 In 2013, a team led by Jinsong Li from the Chinese Academy of Sciences found that mice with a dominant mutation in a gene that causes cataracts could be rescued by coinjection into zygotes of Cas9 mRNA and a single-guide RNA targeting the mutant allele (7). An independent team led by Hans Clevers at Hubrecht Institute in The Netherlands used the CRISPR/Cas9 genome editing system to correct the cystic fibrosis transmembrane conductor receptor (CFTR) by homologous recombination in cultured intestinal stem cells of patients with cystic fibrosis (8).

The difference with CRISPR/Cas9 in comparison to other genome editing techniques is its ease of use.  “I was really excited when I saw these two papers,” said the University of California Berkeley’s Jennifer Doudna. “They are the first direct demonstration of use of genome editing to correct point mutations in two diseases with real phenotypic effect.”

Li’s team noted that CRISPR/Cas9 has been used to generate mutations in a wide range of organisms, but its potential to efficiently correct disease hadn’t yet been realized. The researchers chose to explore its potential in mice with a dominant cataract disorder caused by a single copy of a gene known as Crygc. When all was said and done, the researchers had cured 24 mice of their disease.

Meanwhile, Hans Clevers and colleagues applied CRISPR to disease correction in adult stem cells isolated from two patients with cystic fibrosis. They were able to demonstrate functional correction of the gene in clonally expanded organoids.

“CRISPR in adult stem cells has huge potential, because the genomes of adult stem cells in organoid cultures are stable,” said Gerald Schwank, first author of the cystic fibrosis report. “This is a big advantage over induced pluripotent stem cells, which need to go through a phase of crisis where they 'collect' a number of mutations.”

Cystic fibrosis may not be the most likely candidate for gene therapy, however, because the disease affects multiple organ systems. Nevertheless, the findings are proof-of-principle for use of CRISPR to correct single-gene conditions.

“I think it is absolutely possible to use CRISPR to cure genetic disease in the near future,” Li says, though there are some things to sort out first.

The potential for off-target effects is a major limitation. The procedure will also need to be perfected until the efficiency of repair approaches 100 percent.

“We need to be sure it's accurate enough and efficient enough for repair,” Doudna said. “And it can't be too hard to apply. These papers suggest it might work well enough to consider as a therapeutic.”

There are many fundamental questions about CRISPR/Cas biology still left to answer as well, she says, and those details will continue to be a primary preoccupation of her California lab and many others. “Those off-target effects are important,” she said. “We also really need to get a handle on how cleavage sites are repaired.” Those insights will be critical for scientists’ ability to influence editing efficiency.

In 2022, despite the increasing effectiveness of CRISPR/Cas9, scientists are still looking for ways to diminish the possibility of those off-target mutations when using this technology. When CRISPR therapies are being given in vivo, it is difficult to use larger enzymes.

To reduce the impact of off-target mutations, scientists are using sgRNA for selection and optimization. In addition, the current work in developing anti-CRISPR proteins aid the limitation of these mutations, to control the CRISPR system activity.  Using an AAV vector may help with size limitations. In addition, non-viral applications are also possible through the use of nanoparticles. [6].