A History of Genome Engineering in Popular Culture

This post was contributed by Kartik Lakshmi Rallapalli, a graduate student at the University of California, San Diego.

The revolution in genetic engineering techniques is a speculation of yesteryear which has been realized recently. Science Fiction (SciFi) writers have been curious about the capability of transforming the genetic code of living organisms and its societal implications even before the discovery of genes themselves.

How has scientific progress in genetic editing impacted the world of fiction and vice versa? We draw a parallel between the timelines of the scientific advancements and the noteworthy work of fiction that it inspired. CAUTION: Spoilers alert!

H.G. Wells, the father of scientific fiction, was also a trained biologist. This is apparent in his work The Island of Dr. Moreau (1896) where he explores the concepts of animal testing and modifications. The premise of the novel involves Dr. Moreau who creates human-animal hybrids. This book is published 30 years after the seminal work of Gregor Mendel on the genetic inheritance (1866) and just when the Mendelian genetics was being revived by the botanist Hugo de Vries (1896).

In 1928, Frederick Griffith used mouse models to prove that Streptococcus pneumoniae bacteria could be transformed from one organism to the other. This is now famed as the Griffith’s experiment.

The period between 1940-1960 was pivotal for genetics and SciFi.  Scientists around the world began looking for the magic molecule that serves as the code of life. In 1944, Oswald Avery, Colin MacLeod, and Maclyn McCarty’s experiment debunked the myth that protein is the carrier of genetic information and led to the coronation of DNA as the molecule of life.  This was further reinforced by the findings of the 1952 Hershey-Chase experiment. In the same year, Rosalind Franklin and her student Raymond Gosling took the first ever X-ray diffracted image of the DNA. Finally, in 1953, Franklin along with James Watson and Francis Crick resolved the DNA double helix. In the 1960s, Har Gobind Khorana, Marshall W. Nirenberg, and Robert W. Holley cracked the genetic code and explained how the four letters of the DNA get translated into the twenty amino acids. Once scientists established that DNA encoded all the information necessary for regulating and propagating life, there was no turning back.

While the world of molecular genetics was booming, SciFi saw the rise of literary giants such as Isaac Asimov, Arthur C. Clarke, James Blish, and John W. Campbell. This period is termed as the golden age of SciFi, but the common themes that these authors were exploring were space and robots. Warping to stars in space ships and the rise of killer machines that exterminate entire humanity were the two most popular topics that sparked the imagination of most of the authors during this period.

Having visualized and understood the DNA, the next milestone for the molecular biologist was to devise methods to manipulate it. The term genetic engineering itself is attributed to SciFi writer Jack Williamson who used it in his 1951 novel Dragon’s Island. In 1976, the world’s first genetic engineering company, Genentech, was founded.

This commercialization of gene editing technology led to the development of many important medical and agricultural products. But it also made SciFi director Ridley Scott wonder what would happen if these corporations would extrapolate genetic engineering to exploit human beings. Ridley Scott directed Blade Runner (1982). It is a dystopian film that revolves around synthetic humans called replicants which are genetically engineered by a powerful corporation to serve as slaves. 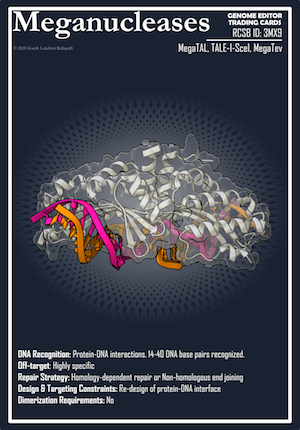 In 1989 the first ever DNA-editing enzymes, meganucleases, were discovered. These proteins are characterized by large DNA recognition sites, which makes them highly specific.

Jurassic Park by Michael Crichton was published in 1990, just a year after the discovery of meganucleases. The storyline involves the resurrection of dinosaurs by extracting the DNA from fossilized amber and supplementing it with the DNA of present-day frogs via genetic engineering. The corresponding movie came out in 1993 and sequels of Jurassic Park (1997, 2001, 2015, and 2018) were highly successful in the box office, indicating the insatiable appetite of the moviegoers for dinosaurs wreaking havoc in a theme park.

Released in 1997, GATTACA is an American SciFi film starring Ethan Hawke, Uma Thurman and Jude Law. The movie’s name is itself a combination of the four bases of DNA – A, T, G, and C. In this movie Ethan Hawke’s character revolts against class divide that is created by genetics.

Zinc finger nucleases (ZFNs) are artificial restriction enzymes generated by fusing a zinc finger DNA-binding domain to a DNA-cleavage domain (FokI). Zinc finger nucleases were first designed in 2005. The DNA-binding domain can be engineered to target specific DNA sequences while FokI then induces a double strand break. These breaks can then be repaired by homologous recombination with a repair template.  Each zinc finger recognizes a nucleotide triplet and when several ZFNs are strung together, it can read many base pairs simultaneously to increase specificity. This modular approach made ZFNs highly appealing to researchers.

In 2010, transcription activator-like effector nucleases (TALENs) were engineered. TALENs follow a DNA-binding and DNA-cleaving strategy similar to the ZFNs, but instead of recognizing nucleotide triplets, the components recognize individual nucleotides. This imparts TALENs more specificity and a broader substrate preference than the ZFNs. 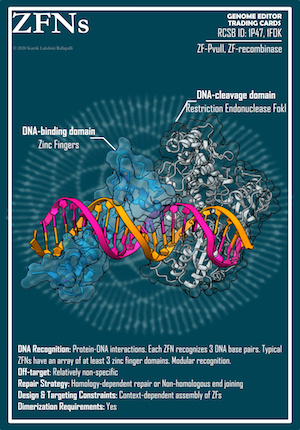 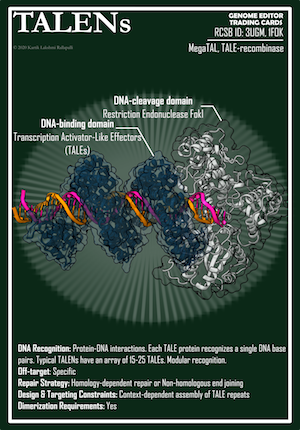 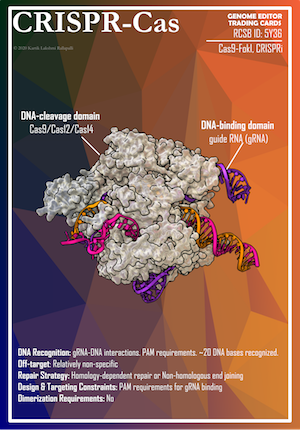 The strategy of using a protein to recognize DNA sequences is not ideal. For the early generation gene editors, new amino acid recognition sites had to be designed each time we wanted to target new genomic sites. The discovery of the Cas proteins in 2005 was a major breakthrough in the world of genetic engineering as CRISPR-Cas editing soon replaced the protein-based DNA-binding domain with a single-guide RNA sequence.  The Cas proteins, just like its predecessor induce a double-strand break at the target genomic location. This is typically followed by non-homologous end-joining that results in gene knockouts.

Star Trek: Into Darkness (2013) which is the remake of the space-melodrama Star Trek II: The Wrath of Khan (1982) combined the worlds of genetic engineering and space travels. The movie sees the USS Enterprise crew fight against a genetically engineered superhuman Khan.

The novel, Inferno (2013) and the movie version (2016) stars Tom Hanks as the protagonist (Langdon). The plot involves Langdon chasing an anti-villain geneticist named Zobrist who designs a virus that can potentially kill one-third of the human beings (just like the black plague). 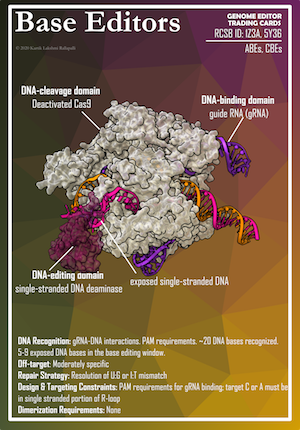 The major drawback of all the endonuclease-based gene editors (meganucleases, ZFNs, TALENs, and CRISPR-Cas) is that they induce double-strand breaks (DSBs) in the genome. These technologies rely on the cellular DNA repair machinery, which can lead to high frequency of indel formation in the genome and are inefficient at introducing point mutations. In 2016, the researchers at the Broad Institute envisioned a new strategy to introduce point mutations in the genome. They fused a catalytically impaired Cas9 protein to a DNA-editing enzyme to generate the prototypical base editor enzymes. The cytidine base editors (CBE) use a cytidine deaminase to introduce a C→T change at precise locations in the genome. This was soon followed by the adenine base editor (ABE) enzyme in 2017. ABEs rely on a similar strategy as CBE but use a ssDNA adenosine deaminase (evolved from a tRNA deaminase enzyme, TadA) to induce a A→G mutation at the target genomic loci. Together, CBE and ABE have obviated the indel formation rates that are typically associated with the DSBs and offered unprecedented prospects of curing diseases caused due to single nucleotide variations in the genome.

Due to the rise of CRISPR in genetic engineering and open advertisement of the technology on various non-scientific platforms, CRISPR has also transcended into the world of SciFi. This is apparent in the use of the word ‘CRISPR’ for anything associated with genetic engineering in the recent SciFi movies. Rampage (2018), starring Dwayne “The Rock” Johnson, calls out CRISPR as the genetic engineering experiment which goes horribly wrong. The plot of the movie involves The Rock and his super giant albino gorilla fighting off a monstrous wolf and crocodile, that were “affected by CRISPR.”

The latest breakthrough in genome editing is prime editing, which was designed in 2019. It’s based on a prime editor which is a fusion between Cas9 and reverse transcriptase. Using an elongated template + guide RNA called pegRNA (prime editing RNA), the prime editor can install all possible point mutations, delete short stretches of DNA and even insert new DNA at the target genomic loci. 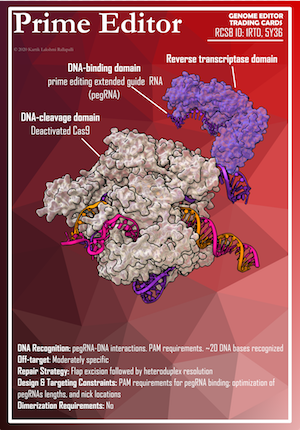 SciFi is one of the most imaginative and most important genres of literary fiction. It has always served as a vision of the future and to make us reframe our perspective of the current. Although genome editing technologies have brought a renaissance in the field of health sciences, energy, and agriculture, its portrayal in popular fiction has been largely negative. But these negative depictions serve as cautionary tales for the entire scientific community and  remind us to always consider the ethics and broader implications of our research.

Many thanks to our guest blogger Kartik Lakshmi Rallapalli from the University of California, San Diego. 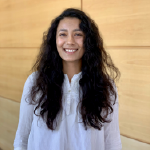 Kartik Lakshmi Rallapalli is a 3rd year graduate student in the lab of Prof. Francesco Paesani at University of California San Diego. She is working in collaboration with Prof. Alexis Komor and together they are trying to broaden our understanding of the base editing enzymes. Kartik’s research focuses on the use of molecular dynamics simulations and machine learning to develop a predictive understanding of the adenine base editors which can help accelerate the engineering of novel base editor proteins. She is particularly interested in combining the realms of art and science. Follow her at @kartik_lakshmi.