GPCRs: How Do They Work and How Do We Study Them?

This article was written by Alyssa Cecchetelli and Andrew Hempstead.

What do smell, taste and sight have in common, besides being one of the five senses? GPCRs or G-protein-coupled receptors (GPCRs)! Aside from these three senses, GPCRs play roles in initiating signaling pathways in inflammation, and neurotransmission. These receptors can be activated by an array of different ligands, including hormones, neurotransmitters, photons or odorants, to elicit downstream signaling cascades.

So let’s break down the name "G-protein coupled receptor" into two parts: the receptor itself and the G-proteins it associates with.

GPCR signaling is initiated when a ligand binds to the extracellular surface of the GPCR. This results in a conformational change in the GPCR causing the activation of the Gα subunit. The activated Gα exchanges bound GDP with GTP, resulting in the disassociation of the Gα subunit from the Gβγ dimer. The Gα and Gβγ subunits then induce or inhibit intracellular signaling cascades as a response to the extracellular stimuli. Ligand dissociation from the GPCR allows for binding of a new inactive heterotrimeric G protein complex and subsequently another round of signaling. 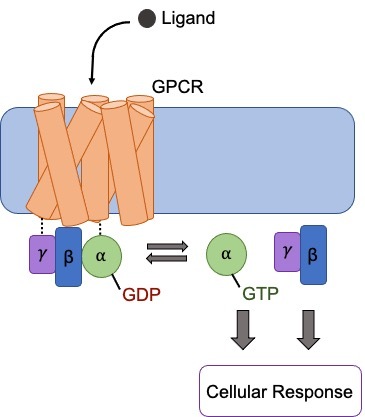 So with the hundreds of GPCRs out there, how can scientists decipher the signaling pathways from ligand to receptor to G-protein, and finally, to a response? Let’s take a look at a few examples with plasmids deposited at Addgene.

While there’s still a lot to learn about GPCR signaling, researchers in the meantime have developed GPCRs for chemogenetic studies to probe the relationship between neurons and specific behaviors. Chemogenetics uses genetically engineered receptors to interact with small molecules to elicit a response in a certain cell type. Chemogenetics is similar to optogenetics but instead of light, these genetically modified receptors are activated by small molecules to either activate or inhibit neuronal firing. As GPCRs are the largest class of signal transducing receptors in the brain they are ideal candidates for use in chemogenetics.

To create chemogenetics receptors, GPCRs were first mutated via site-directed mutagenesis to bind non natural ligands. These non natural ligands however exhibited off-target effects thus scientists then modified some GPCRs further to respond to specific, pharmacologically-inert, small molecules. These new receptors were termed Designer Receptor Exclusively Activated by Designer Drugs (DREADDs) (Roth, 2016). DREADDs were engineered from members of the human muscarinic receptor family and are activated by small molecule ligands such as clozapine-N-oxide (CNO). DREADDs are ideal for chemogenetics as they are relatively insensitive to their endogenous ligand, acetylcholine, and are only activated upon binding of CNO thus showing no constitutive activity. There are an array of DREADDs that activate different G proteins, work in different neurons and neuroglia, and have different effects on neuron activity (firing or inhibition). AAV preps from DREADD plasmids allow you to easily express a DREADD receptor in a specific neuronal subtype in the brain that can either activate or inhibit neurons. You can find information more about chemogenetics and a concise table of DREADDS and their activity in neurons on Addgene’s chemogenetics guide.