In order to understand the complex wiring of the brain and the underpinnings of neurological disease, neuroscientists need to be able to probe cells and circuits without disrupting normal brain function. Chemogenetics has become a popular tool in the field as it provides a noninvasive method for manipulating cell activity, especially neuronal firing.

Chemogenetics relies on genetically introducing engineered receptors that are only activated by otherwise inert drugs. Once activated, chemogenetic receptors hijack cell signaling pathways and can lead to such responses as decreased heart rate (Redfern et al., 1999) or altered neuron excitability (Zhu et al., 2014). The system allows you to study signaling pathways and the impacts of neural circuits on behavior.

Because chemogenetic receptors are activated through administered drugs that must diffuse throughout the body, the onset of receptor activation is delayed and takes on the order of minutes. Studies looking at immediate effects of specific neuron firing are better equipped using fast acting optogenetic tools. The advantages provided by chemogenetics are instead that it is noninvasive and has longer lasting effects.

To set up a chemogenetic system, you’ll need to choose a method for targeting receptor expression as a ligand and receptor pair.

Using chemogenetics requires successfully introducing receptors to target cells. Targeted and specific delivery becomes especially important for studies in neuroscience where specific tissues, cell types or even subcellular regions of a neuron need to be targeted. Targeting is also important in the development of therapies when expression must be restricted to specific circuits. Methods for targeting expression involve tissue specific promoters, AAV serotypes, and the ever growing variety of recombinase systems.

Picking the right ligand is also important for building a chemogenetic system. Your experiment is dependent on the ability of agonists to successfully reach target cells while resulting in minimal off target effects. For example, if your receptors are expressed in the brain, it is necessary to use ligands capable of crossing the blood brain barrier.

Another consideration when picking ligands for chemogenetic studies is whether or not your study is aimed at developing human therapies. In these cases it is best to work with FDA/EMA approved drugs so that your results are viable for translation to human patients.

The receptor you choose is largely dependent on what cellular response you aim to manipulate. It is important to consider that the same receptor can elicit different responses depending on what cell type it is expressed in. The most common target for chemogenetic manipulation are neurons where chemogenetic receptors can be used to alter excitability by lowering or raising the threshold for signaling. The two main classes of receptors currently used in chemogenetics are DREADDs and PSAMs.

DREADDS, or designer receptors exclusively activated by designer drugs, are G protein-coupled receptors (GPCRs), that have been reprogrammed to respond only to inert, nonnative ligands. However they retain their intracellular interactions and still set off the same pathways, giving rise to the same cellular responses. The cellular response set off by a DREADD depends on what G-protein and, consequently, what pathway the receptor acts through. The DREADD hM3D(Gq), for example, lowers the threshold for neuronal signaling and causes neuronal burst firing. Other DREADDs, such as the KORD receptor, increase this threshold and silence neurons.

Several DREADDs, including hM3D(Gq), have been derived from muscarinic receptors. The most popular agonist for muscarinic receptor derived DREADDs has been CNO (clozapine-N-oxide). However, concerns have been raised over the reliability of using CNO as a DREADD agonist due to its ability to be metabolized into CLZ (clozapine). While some scientists argue that these issues can be mitigated by using low doses and running appropriate controls (Jendryka et al., 2019), they have resulted in a search for alternative ligands, such as C21, CLZ, Perlapine, and Olanzapine, that can also activate muscarinic derived DREADDs. A new ligand from the Bryan Roth lab and Takafumi Minamimoto’s lab called deschloroclozapine (DCZ) has also recently been developed and shows promise as a CNO alternative (Nagai et al., 2019).

PSAMs, or pharmacologically selective actuator modules, were developed with the goal of creating receptors with less endogenous activation and reduced off target activation by ligands. PSAMs themselves are modified ligand binding domains. When coupled to the ion pore domain (IPD) of a channel, the PSAM acts as a gating mechanism to control ion flux. The system allows you to directly manipulate ion channels. When working with PSAM receptors, your impact on the cell is determined by what IPD your PSAM is combined with. Combining a PSAM with the IPD of a cation channel, such as the serotonin 3 receptor, will promote depolarization in neurons. Alternatively, combining with the IPD of an anion channel, such as the glycine receptor, will promote hyperpolarization.

The advantage of PSAMs lies in their ability to be specifically and potently activated by pharmacologically selective effector molecules (PSEMs). Higher potency means lower drug doses, which decreases the risk of off target effects. These synthetic agonists can penetrate the brain and some, such as varenicline, are already approved for clinical use. Varenicline has been further modified to create uPSEMs (ultrapotent PSEMs) that have drastically increased potency. 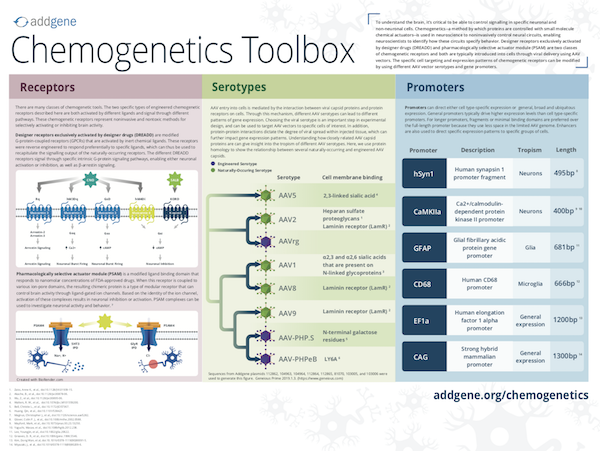