This post was contributed by guest blogger Joachim Goedart, an assistant professor at the Section of Molecular Cytology and van Leeuwenhoek Centre for Advanced Microscopy (University of Amsterdam).

Tagging a protein of interest with a fluorescent protein to study its function is one of the most popular applications of fluorescent proteins. These fusion proteins enable the observation of proteins in living cells and organisms. Both components of the chimera are encoded by DNA. Since researchers can generate almost any DNA sequence in the way that they like, the design and engineering of fusion proteins is relatively straightforward. However, generating a fusion while keeping all of the native properties of the protein of interest can be challenging. In this blog I discuss strategies to generate fusion proteins and highlight some aspects of their design. 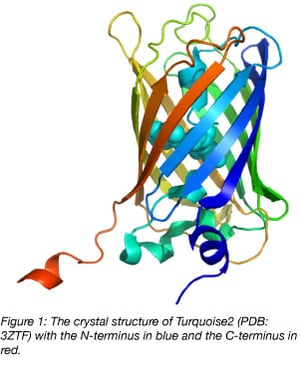 The green fluorescent protein (GFP) from Aequorea victoria and its variants are genetically encoded fluorescent probes. One of the limitations is the size of GFP: ~240 amino acids or about 28 kDa. GFP and its homologues have a beta-barrel structure. Although the beta barrel has no strong affinity for other proteins, it may still block the function or activity of the tagged protein because of its size. This type of interference is known as steric hindrance. For instance, GFP may occlude catalytic sites or obstruct binding sites or motifs that are necessary for post-translational modifications. Despite these potential issues, GFP has been used successfully in countless fusion proteins.

Next to size, potential homodimerization and higher order oligomerization of fluorescent proteins is a concern. The propensity of fluorescent proteins to oligomerize is known as “stickiness.” Since the fluorescent tag should operate as an inert light emitting module, any tendency of GFP to homodimerize should be avoided because it will double the size of the protein. In addition, it increases avidity because it doubles the number of binding sites per unit.

There are several ways to measure stickiness. In vitro, ultracentrifugation or gel filtration is the most common analytical method. However, these may not reflect the situation in cells. Therefore, the localization of critical fusions (e.g. tubulin or connexin) has been used as a proxy for dimerization (Shaner et al., 2008 - supplementary figure C). However, these assays are qualitative. The Organized Smooth Endoplasmic Reticulum (OSER) assay (Costantini et al., 2012) measures homodimerization of FPs targeted to the endoplasmid reticulum based on the appearance of OSER whorls. This assay is quantitative and is currently the standard for assessing oligomerization in cells.

In the early days of GFP applications, many were concerned with steric hindrance by the fluorescent protein. Thus, scientist began using relatively long linkers between the protein of interest and the fluorescent protein. These were either (i) coded by the multiple cloning site and therefore consist of random amino acid sequences or (ii) designed to form an inert, unstructured peptide and therefore consisted of glycines, serines and other small, non-aliphatic amino acids. However, long linkers increase the chance that a fusion protein is cleaved by proteases.

Nowadays, with ample structural information available, it’s clear that the C-terminus of fluorescent proteins derived from Aequorea victoria GFP sticks out and can be considered a linker (figure 1). In fact, for several FRET biosensors (yellow cameleon 3.60, EPAC, and Galphai), the C-terminus and N-terminus of the donor fluorescent protein can be truncated to increase the FRET efficiency.

When both orientations are available, a direct comparison of these fusion proteins may reveal which of the two better preserves the function of the POI. For example, the APT1-mVenus fusion localizes at the Golgi, whereas the mVenus-APT1 fusion does not (figure 2). In the mVenus-APT1, a lipidation motif, which is needed for Golgi localization, is occluded and therefore this protein is mislocalized. The APT1-mVenus fusion is clearly a better choice to work with.

Inserting a fluorescent protein within your protein of interest

Where should the fluorescent protein be inserted? Sites that are less likely to disrupt the structure of the POI would work best. Ideally, structural information can guide this decision. In our experience, the best site for the insertion is a loop in between secondary structure (beta-sheets or alpha helices). An additional requirement is that the site of insertion does not interact with other proteins or biomolecules. Examples of the successful insertion of a fluorescent protein are the tagging of Ccd42 (Bendezú et al., 2015) and the alpha subunit of heterotrimeric G-proteins (Janetopoulos et al., 2001, Adjobo-Hermans et al., 2011).

Although structural information may guide design, it is advisable to generate multiple constructs with different insertions, since it is difficult to predict which one will work as illustrated in figure 3 (Mastop et al., 2018). Unbiased, random insertions can be generated with a transposon-based strategy (Sheridan, 2002). 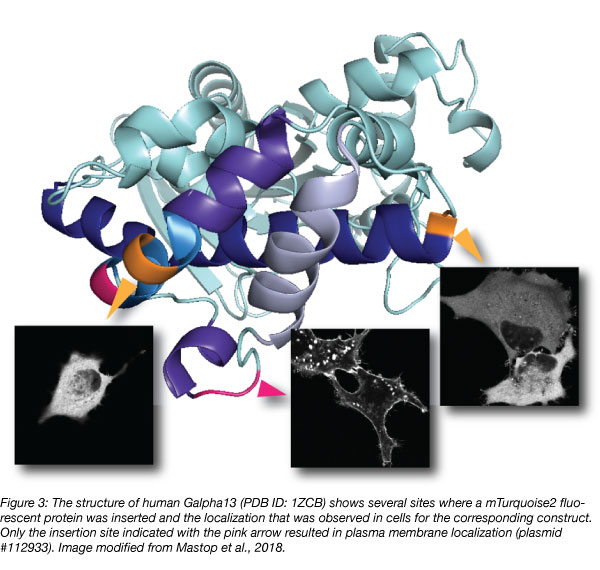 The introduction of DNA that encodes a fusion protein adds protein to the existing pool of protein within a cell and may lead to over-expression artifacts. This is an important downside of the technology and should always be considered when interpreting results.

The recent revolution in genome editing methods (most notably CRISPR/Cas mediated HDR) enables the tagging of endogenous genes close to native expression levels. However, it is advisable to first express the fusion protein from a plasmid-based system to assess whether the chimera is still functional.

There are several choices to consider before generating a fusion protein, e.g. linker length, the specific fluorescent protein variant, and where to add the fluorescent tag. These choices will determine how well the fusion reflects the function of the native protein that is tagged. The localization of the fusion protein can be verified and it can be compared to what is expected based on immunofluorescence or properties of the protein.

Determining other aspects of functionality (catalytic activity or interactions) can be challenging. If a fusion can complement a knock-down or knock-out of the corresponding protein, that is strong evidence that the fusion behaves well. But this is not conclusive evidence that the fusion operates in the same way as the native protein. Although a fluorescent protein fusion may never be able to act identical to the untagged protein, the benefits of being able to see your protein of interest usually outweigh potential negative consequences of the tag.

Joachim Goedhart is an assistant professor at the Section of Molecular Cytology and Van Leeuwenhoek Centre for Advanced microscopy (University of Amsterdam). He develops, characterizes, and uses genetically encoded fluorescent probes. You can follow him on twitter: @joachimgoedhart.