The best fluorescent proteins for live cell imaging can be excited many times, thereby producing a large number of emitted photons before they are destroyed.

This non-linear dependence on excitation power is important since different fluorescence imaging strategies use widely varying amounts of excitation power (Shaner et al, 2008). In confocal laser scanning microscopy, fluorescent proteins are excited with very intense light (for a brief time), whereas in widefield imaging fluorophores are excited with relatively low light levels (for a prolonged time). Other illumination strategies, such as 2-photon-excitation, selective plane illumination, TIRF or spinning disk confocal use entirely different excitation power regimes. Therefore, it is unpredictable which fluorescent protein is most photostable for each of these conditions. On top of these factors, environmental conditions such as cellular redox state and oxygen concentration may affect photobleaching rates (Shaner et al, 2008). This brings us to the key question: what is the best way to compare the photostability of different fluorescent proteins? 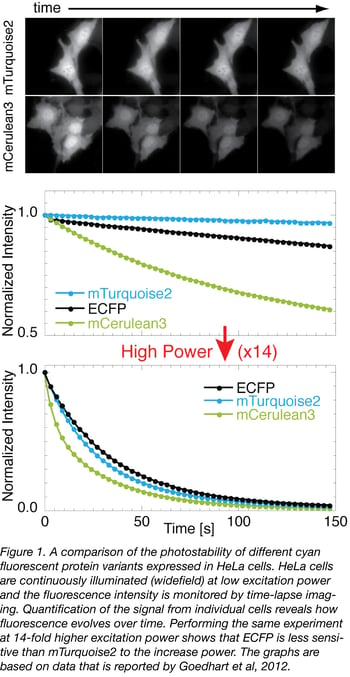 It should be noted that the photostability measurements reported in the literature are performed in different ways. We describe a number of issues with some of the experimental designs used to make these measurements and hope this information can help guide your understanding of reported data.

The second issue is that, in experiments that measure photostability, high excitation powers are often used to reduce the length of the experiments. As the photobleaching rate is not linearly related to power, the conclusions reached at high power may not translate to real applications in which far less power is used. For example you might find that you can get useful data from your chosen FP for much longer than predicted by these high power experiments. Measuring photostability at realistic powers will provide better insight into the photostability in the intended application (Goedhart et al, 2012).

The third issue relates to the environment of the fluorescent protein. Photostability measurements can be performed on purified fluorescent proteins. To avoid diffusion, the proteins are (i) trapped in microdroplets in a water/oil emulsion, (ii) embedded in a gel, or (iii) attached to a substrate. These in vitro methods allow for a well-controlled environment, but they do not mimic the natural situation. Measuring photostability in living cells provides a much more realistic view of photostability.

The issues with quantification of photobleaching rates can be summarized as follows: Instead of determining a t½ of a fluorescent protein in a water/oil emulsion at high power, it is far more relevant to measure how fluorescence intensity evolves over time in living cells at a power used for live-cell imaging.