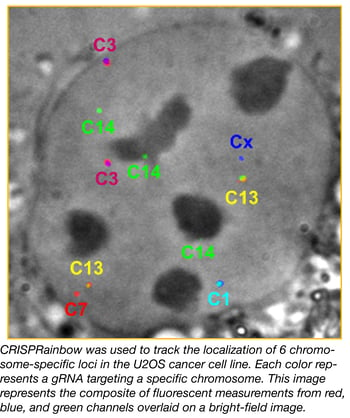 Colorful CRISPR technologies are helping researchers visualize the genome and its organization within the nucleus, also called the 4D nucleome. Visualizing specific loci has historically been difficult, as techniques like fluorescent in situ hybridization (FISH) and chromosome capture suffer from low resolution and can’t be used in vivo. Some researchers have used fluorescently tagged DNA-binding proteins to label certain loci, but this approach is not scalable for every locus...unlike CRISPR. Early CRISPR labeling techniques allowed researchers to visualize nearly any single genomic locus, and recent advances have allowed scientists to track multiple genomic loci over time using all the colors of the CRISPRainbow.

The flexibility of CRISPR has improved our ability to target almost every genomic locus, and to do so in vivo. Catalytically dead Cas9 (dCas9) cannot induce gene editing, but it retains its gRNA-directed targeting capacity. By using a gRNA to target fluorescently labeled dCas9 to a given genomic locus, you can track the localization and movement of this locus in live cells! This technique was developed in the lab of Addgene depositor Stanley Qi and used in Chen et al. to track telomere dynamics throughout the cell cycle. To optimize the signal to noise ratio of the system, they modified GFP-dCas9 and the gRNA scaffold to enhance complex assembly, thereby decreasing the amount of background fluorescence from unbound GFP-dCas9. With these improvements, labeling efficiency was similar to that of a comparable FISH method. Importantly, they did not observe labeling when a. no gRNA was present or b. when a gRNA binding a non-mammalian sequence (GAL4) was supplied.

In addition to labeling repetitive telomeric sequences, Chen et al. successfully labeled protein-coding genes with both intronic and exonic gRNAs. In fact, the method is specific and sensitive enough to detect gene copy number based on the number of fluorescent puncta observed. By labeling two genes of a given chromosome simultaneously, they could also monitor the spatial relationship of the two genes over time, at a range of distances from 2-75 Mbp.

Building on the work of Chen et al., Thoru Pederson’s lab used CRISPR to label multiple loci in distinct colors. To create a colorful Cas9 toolbox, Ma et al. turned to SpCas9 and its orthologs NmCas9 and St1Cas9. Each ortholog was fused to a different fluorescent protein to create three distinct colors. The specificity of these orthologs is key: since each ortholog requires a different PAM sequence, a gRNA designed for one dCas9 should be specific to that ortholog and not cross-talk with the other orthologs.

Ma et al. tested their dCas9 variants using gRNAs specific for telomeric sequences and showed that different fluorescently labeled dCas9s are efficiently directed to the proper target sequence. They succeeded in labeling two different pairs of chromosomes using gRNAs specific to sequences on chromosomes 9 and 13. They next turned their attention to mapping pairs of intrachromosomal loci. The technique successfully resolved loci with physical map distances of 2 and 75 Mbp, with the calculated fluorescent distances correlating with the previously established physical map. In comparing pairs of targets ~2 Mbp apart, they noticed that they could evaluate the degree of chromatin compaction even for this small distance! To the authors’ knowledge, this work represents the first mapping of intrachromosomal loci, a major benchmark in characterizing the 4D nucleome.

CRISPRainbow: Scaling up to 6 colors + white

Despite the success of Ma et al.’s approach, fluorescently labeled Cas9’s come with a number of limitations. Since color is specified by PAM sequence, each color requires a different Cas9 ortholog, and the target sequence must be located adjacent to that PAM. To scale up fluorescent CRISPR labeling, they took a new approach: labeling the gRNA itself.

In their CRISPRainbow paper, Ma et al. engineered gRNA scaffolds containing two hairpin sequences, which recruit fluorescent proteins BFP, GFP, and RFP fused to the respective hairpin binding domain. Pairs of identical hairpin sequences specify the primary colors blue, green, and red. In contrast, a gRNA with two different hairpins will produce a secondary color cyan, yellow, or magenta, depending on the hairpin combination bringing the total number of individual colors to 6. A gRNA with all three hairpins generates white light. All 6 gRNAs can be expressed in a single vector, pCRISPRainbow-DONOR1, with dCas9 supplied by a separate vector. 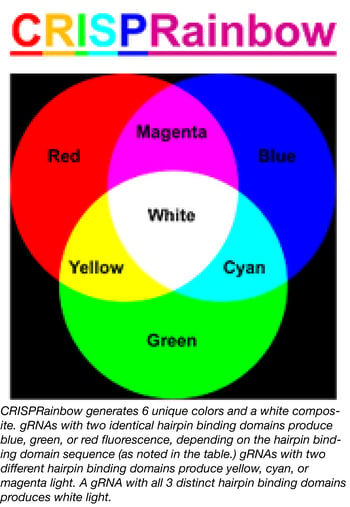 With this rainbow of colors, Ma et al. performed sophisticated tracking of multiple chromosomal loci in live cells. However, they note that certain improvements could make CRISPRainbow even better. Adding an additional hairpin/fluorescent protein combination, for example, with a far-red FP, would increase the available colors to 15! They also envision using CRISPRainbow in combination with gene editing. CRISPRainbow requires very short, 11-mer gRNAs, which do not induce genome editing. If used with catalytically active Cas9, the short, CRISPRainbow gRNA will permit labeling, but a newly expressed standard length gRNA would “switch” the system and induce genome editing. Such a system has been previously described for transcriptional activation/repression and genome editing.

Ready to make your cells a little more colorful? CRISPRainbow is available as a kit from Addgene.