Genome-wide CRISPR/Cas9 screens are a high-throughput systematic approach for identifying genes involved in a biological process. These screens provide an alternative to genome-wide RNAi screens, which although highly effective, are affected by low on-target efficacy, non-specific toxicity, and off-target effects. The flaws of RNAi screens are well characterized and strategies exist to control for these faults. However, it’s still unclear if similar pitfalls exist for CRISPR screens and how best to design these screens to controls for flaws. Recently the Bassik Lab at Stanford developed a new genome-wide CRISPR knockout screen to analyze the following unanswered questions about CRISPR screen design.

To better define the optimal conditions for CRISPR knockout screens, the Bassik lab created a human knockout library that has 10 gRNAs per gene and targets all ~20,500 protein-coding genes. Unique, non-overlapping sites in the genome were targeted and predicted on-target activity was balanced with predicted off-target activity when selecting guides. Guides were delivered as a pooled library via a lentiviral vector to cell lines that either stably expressed Cas9 or that had been lentiviral infected with Cas9.

The CRISPR knockout library was validated via a growth screen and a ricin toxicity screen since essential and non-essential genes for both pathways had previously been identified (Hart et al, Bassik et al). The library performed well in both screens, with the growth screen having a 1% false discovery rate and identifying >88% of previously identified essential genes while previous Cas9 and shRNA library screens only identified  60% of the essential genes. The ricin toxicity screen had a 10% false discovery rate and identified 67% of previously identified ricin toxicity genes. The screen also discovered several genes previously not associated with ricin regulation, including almost all genes involved in the production of a cell surface glycan that’s required for ricin uptake. The ricin screen did fail to identify some known ricin-regulators, but most of these genes are also essential for growth and would not be expected to be identified in a CRISPR knockout screen.

Before diving into the results, it’s important to note that in Morgens et al., guides were considered toxic if they were depleted from the screen. This toxicity was used a proxy for detecting Cas9 cutting. 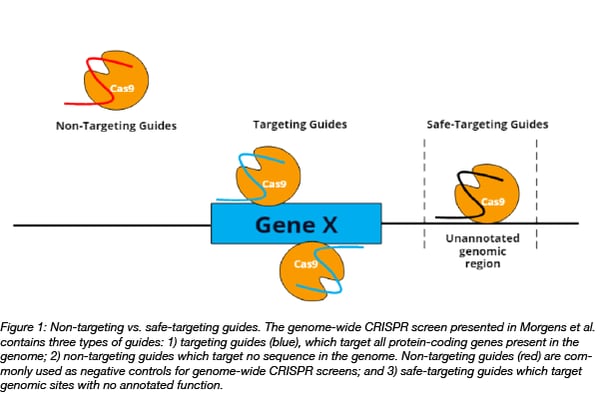 Off-target cutting does not confound results of CRISPR screen

Lastly, the effects of guide length on off-target cuts was explored using full-length (19-20 bp) or short (17-18 bp) guides. When comparing the toxicity of guides that have 1-bp mismatch off-target sites, short guides had reduced toxicity compared to full-length guides. Reduced toxicity of short guides could be due to lower off-target activity, but it could also be caused by a reduction of on-target activity. However, there was no significant difference in depletion of ricin sensitizer genes identified with short and long guides. Together these results suggests  that short guides have fewer off-target effects than long guides, and do not have a major reduction in on-target efficacy.

Results from Morgens et al. show that genome-wide CRISPR screens are prone to some of the same flaws as RNAi screens, such as non-specific toxicity due to both on- and off-target effects, but also presents a strategy to control for these effects. By testing thousands of guides for off-target activity, Morgens et al drew some generalizable conclusions about off-target activity, demonstrate safe-targeting guides as a potential control, and provide evidence that truncated gRNAs have improved specificity with only a small loss of on-target activity in high-throughput screens. The human and mouse versions of the Bassik CRISPR Knockout Library are available from Addgene!