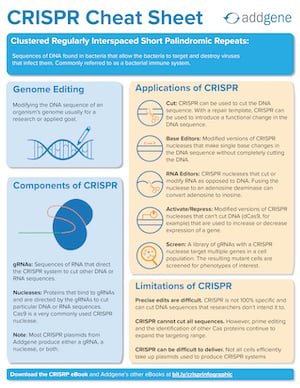 We have some crisp new CRISPR material for you!

This new edition of the eBook includes the details on advances in CRISPR including:

So get excited and download the CRISPR eBook today!

P.S - If you’re looking for a quick refresher before you dive into the CRISPR eBook, check out the CRISPR Cheat Sheet. Download the PDF using the link or use the text below to get the same information.

Sequences of DNA found in bacteria that allow the bacteria to target and destroy viruses that infect them. Commonly referred to as a bacterial immune system.

Modifying the DNA sequence of an organism’s genome usually for a research or applied goal.