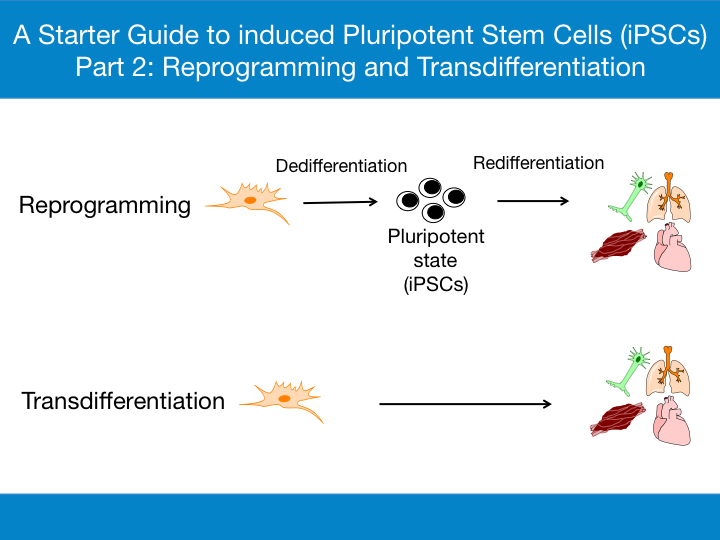 The ultimate goal in the field of regenerative medicine is to replace lost or damaged cells. Here, I will discuss the two major processes by which an adult somatic cell is converted to a different cell type for regeneration and repair and situations where one process is favored over the other.

The reversal of a differentiated cell type to an undifferentiated state and then redifferentiation into the cell type of choice in vitro is known as reprogramming [1]. The process can be divided into two stages:

The dedifferentiation stage involves overexpression of four reprogramming factors- OCT4, SOX2, KLF4, and C-MYC - that induce a differentiated somatic cell to revert back to a pluripotent stage (iPSC formation) [2, 3]. The iPSCs then proliferate and redifferentiate to another cell type of choice. The four reprogramming factors can be delivered and expressed in multiple somatic cells via various methods. Some of the more common delivery methods include retrovirus [2], lentivirus [4], adenovirus [5], Sendai virus [6], plasmid electroporation (episomal) [7, 8] and mRNA transfection [9]. Many of the plasmids used for these methods can be found on Addgene’s stem cell page. On this page, you can also find a table with a list of methods and the species they were used in. iPSCs have now been generated from many different types of somatic cells. The goal is to use cells that can be easily isolated from donors. Apart from fibroblasts, human keratinocytes from hair pluck, peripheral blood cells, and renal epithelial cells from urine are some of the easily isolated somatic cells that have been reprogrammed to iPSCs successfully [10-12].

The next stage of reprogramming consists of redifferentiation of iPSCs into the cell type of choice. This step is sometimes also referred to as “directed differentiation.” Specific cell media, supplements, bioactive small molecules, and growth factors are used to control the cell fate of iPSCs and differentiate them into different cell lineages [13]. Over the last decade, many cell types have been successfully differentiated from human iPSCs. Below is a list of some of these cell types [13]:

You can find a variety of plasmids for differentiation here.

Reprogramming and transdifferentiation: When to use one over the other

Both reprogramming and transdifferentiation convert differentiated somatic cells into another cell type. However, these two approaches differ in several ways. Below is a table listing some of critical differences (adapted from Zhou and Melton, 2008, [43]):

Overall, reprogramming is very flexible. It offers unlimited potential to produce all cell types in the body. On the other hand, only few cell types have been currently transdifferentiated successfully, limiting the utility of this process. Moreover, it is much easier to genetically modify cells during the reprogramming process as they are propagated in vitro as part of the process. This opens up a wide range of possibilities in clinical situations. In cases where the objective is to fix a disease-inducing genetic mutation in a patient, trying to transdifferentiate any of the patient’s cells will not alleviate the problem. The best option then would be to dedifferentiate cells from the patient in vitro then correct the damaged gene in the resulting iPSCs before differentiating the cells into the correct lineage and returning them back to the patient.