The field of induced pluripotent stem cells (iPSCs) has been around for 10 years. In that time, scientists have used almost all available approaches for generating iPSCs. The generation of iPSCs is relatively simple in concept: ectopically express a cocktail of stem cell reprogramming factors and wait for cells to de-differentiate. However it’s difficult, especially as a newbie reprogrammer, to decide which method to use. This post provides a brief overview of reprogramming methods with the goal of helping readers choose a strategy suited to their research.

Overall, integrating viral vectors efficiently and reliably generate iPSCs, but they have several safety concerns. First, they require the use of potentially harmful viral particles that express oncogenes, such as Myc. Viral vectors also have the largest genomic footprint of iPSC generating methods due to the risk of insertional mutagenesis. Random integration also creates heterogeneous iPSC cell lines, which can complicate comparisons made between lines. Incomplete silencing of transgenes is a concern as well, and reactivation of Myc or other oncogenes after differentiation has been linked to tumor formation in iPSC-derived and iPSC-transplanted mice. Cre-deletable or Tet-inducible lentiviruses address some of these concerns, but overall integrating viral systems currently lack the safety required for translational use.

Once generating iPSC clones, it’s important to determine how stem cell-like they behave. iPSCs are typically tested with molecular-based assays first. These methods less rigorously assesses pluripotency, but they also take less time to complete. Morphology is a simple and fast to evaluate. iPSCs should form compact colonies that are comprised of cells with a large nucleus, large nucleoli, and little cytoplasm. Positive staining for alkaline phosphatase, expression of embryonic proteins, and promoter demethylation and expression of endogenous pluripotency genes (i.e. Oct4) are other measures of reprogramming. If a retrovirus was used, then silencing of this vector is another mark of successful reprogramming.

If cells contain molecular hallmarks of reprogramming, then they are typically assessed with more rigorous functional tests. Cells can be differentiated in vitro to form embryoid bodies which are compact balls of loosely organized tissues that express markers of all three germ layers (ectoderm, mesoderm, endoderm). Measuring pluripotency of mouse cells typically involves making chimeras by injecting iPSCs into blastocysts and implanting them into female mice. Generating chimeric offspring shows the ability of the iPSC to contribute to all three germ layers, and the ability of theses chimaeras to produce all-iPSC derived offspring demonstrates the ability of the iPSCs to form functional germ cells. The highest stringency test for mouse iPSCs, tetraploid complementation, involves injecting tetraploid blastocysts with iPSCs and measuring their ability to direct the development of a mouse.

Since many of these functional tests aren’t possible with human iPSCs, the the ability to generate teratomas is the gold standard instead. Teratoma formation requires injecting iPSCs into immunodeficient mice and looking for tumors that contains cells from all three germ layers. 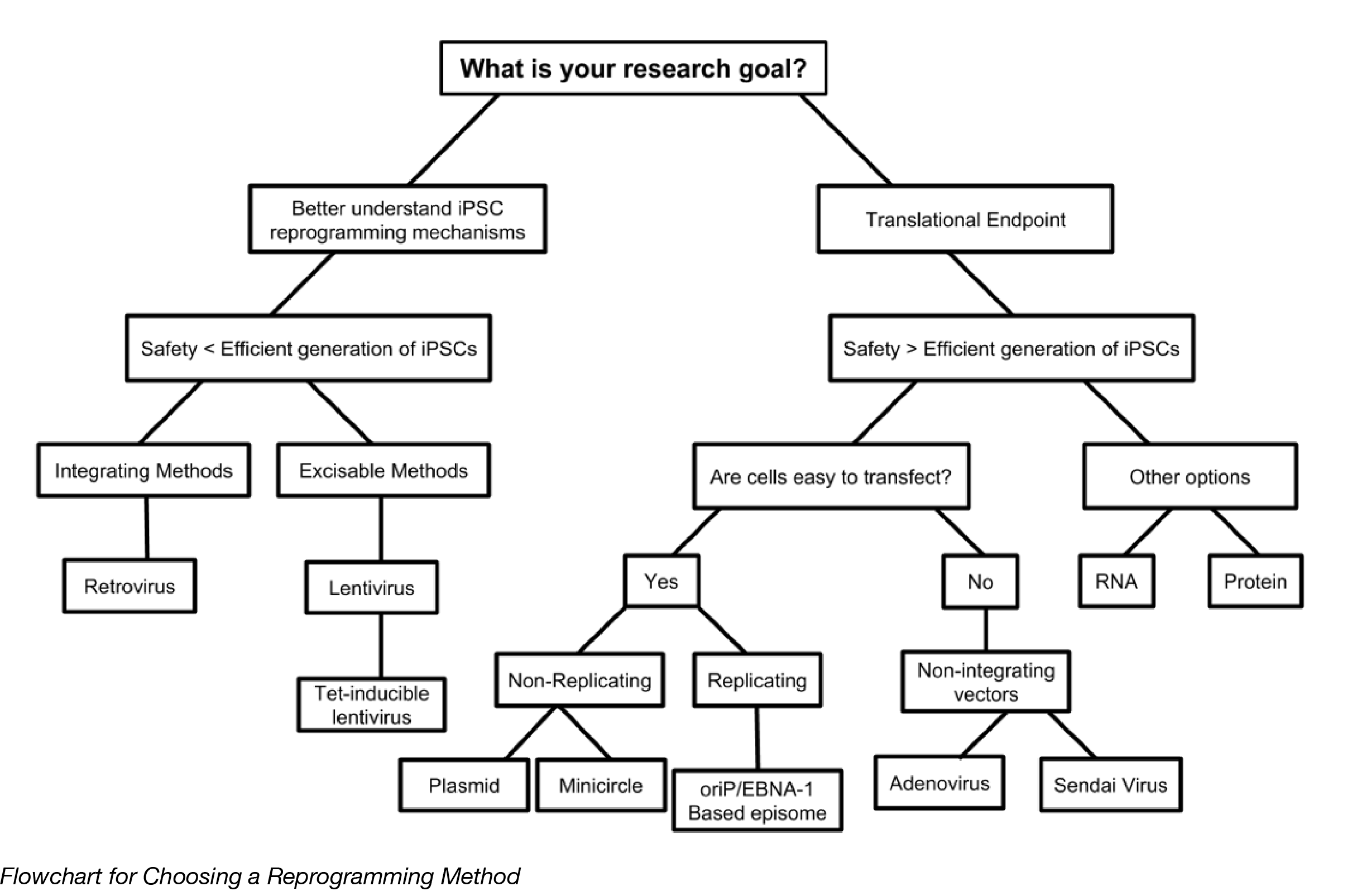 Most iPSC research falls into two categories: 1) studies focused on better understanding the mechanisms of reprogramming, and 2) studies with clinical endpoints. In the first scenario, robust and efficient generation of iPSCs is the number one priority, with safety taking lower priority. Genomic integration is less of a concern, so viral vectors are better suited for these situations. The second scenario requires higher levels of safety and as little chance of genomic alteration as possible, with efficiency being the trade-off. Non-integrating approaches, such as episomes, RNA delivery, and protein delivery are better suited for these types of studies. What cells are reprogrammed will also affect the outcome, since not all cell types are easily attainable, or easy to reprogram. Basically, there’s no universal method that can handle all applications of iPSCs, but there should be at least one method that can help you with your research goals.

Are you a new or experienced reprogrammer? Which methods do you have experience using? Let us know about your iPSCs experiences in the comments below!

Methods figures were adapted from this reference.