In order to bind DNA, Cas9 and other CRISPR enzymes require a short PAM sequence adjacent to the targeted sequence at the locus of interest. SpCas9’s 3’ NGG PAM occurs frequently in GC-rich genomes, but a PAM is not always available near the locus you’d like to modify. To tackle the PAM problem, researchers have engineered alternative Cas9s binding distinct PAM sequences. Now, Hu et al., working in David Liu’s lab, have gone one step further, using directed evolution to create xCas9, an enzyme recognizing a broad range of PAMs like NG, GAA, and GAT, but also displaying increased editing specificity. We’re excited to learn more about xCas9 - here’s what we know so far!

Why do we need PAM flexibility?

IDT estimates that there is an NGG PAM every 42 bases in the human genome. SpCas9 targeting should be easy, right? Yes and no. If you’re just trying to create a knockout, you might be happy targeting anywhere in an exon. But things get more complicated if you’d like to use homology directed repair to make precise edits or knock-ins. Editing efficiency decreases drastically once your cut site is more than 10 bp away from the insertion site, so HDR will be difficult if there’s no PAM near your insertion site. Base editing, another method to create point mutations, also has a strict editing window about 15 nt upstream of the PAM. Even if there’s a PAM near your insertion site, the corresponding gRNA might be undesirable due to potential off-target sites or low predicted on-target efficiency.

In cases where Cas9 won’t work, there are other options. Commonly used Cpf1 variants, with a  5’ TTTV PAM, improve targeting in AT-rich loci or genomes. Cas9s from other species, like S. aureus and N. meningitidis require different PAM sites than SpCas9, in this case, NNGRRT and NNNNGATT, respectively. Researchers also engineered SpCas9 variants with alternative PAMs like NGAG and NGCG and SaCas9 with an NNGRRN PAM by mutagenizing the PAM-interacting domain. However, these alternative PAM sequences are longer and often more complex than NGG, resulting in lower overall genome frequency. Despite the progress we’ve made, there is still a need for and interest in enzymes with shorter PAM sequences and/or broader PAM flexibility.

Hu et al. used phage-assisted evolution to generate and select for Cas9 mutants with PAM flexibility. In this system, the mutagenesis plasmid (MP6) permits quick, large-scale mutation of the gene of interest. They created a selection phage (SP) to carry catalytically dead SpCas9 (dCas9) fused to the bacterial polymerase subunit ω. This construct is designed to activate transcription from the accessory plasmid (AP) encoding phage gene III. The accessory plasmid library contained all 64 possible NNN PAM sequences adjacent to a protospacer. If ω-dCas9 could recognize a library PAM, it would induce transcription of gene III, permitting phage propagation and keeping that dCas9 sequence in the pool. According to this logic, ω-dCas9 variants recognizing multiple PAMs should have a fitness advantage over proteins with single PAM recognition. 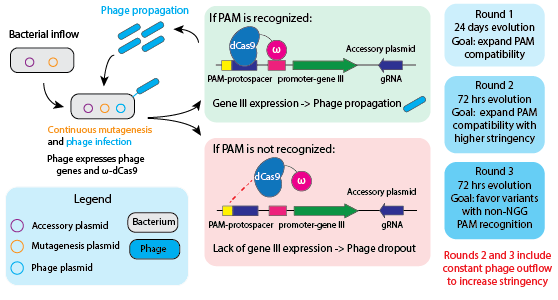 After 24 days of phage propagation, Hu et al. isolated xCas9 1.0-1.4 and subjected them to another 72 hours of phage-assisted evolution, generating xCas9 2.0-2.6. This second round of evolution included continuous outflow of phage, increasing stringency and promoting survival of only the broadest-targeting variants. For the final round of evolution, they used a no-G PAM library to enrich for Cas9 variants with activity on non-NGG PAMs, generating xCas9 3.0-3.13.

To test xCas9 3.0-3.13, Hu et al. first restored catalytic residues D10 and H840. To ensure that the clones were capable of cleavage, they tested the clones against an NNN PAM library in bacteria where cleavage leads to the loss of spectinomycin resistance. xCas9 3.7 showed the broadest PAM range, recognizing NG, NNG, GAT, and CAA PAMs, while xCas9 3.6 displayed the second best PAM range.

Hu et al. compared xCas9 activity with wt SpCas9 in mammalian cells, finding xCas9 3.7 displayed about the same editing rate as SpCas9 at an NGG PAM. When they tested a variety of NG, GAT, GAA, and CAA PAMs, they saw that xCas9 3.7 cleaves multiple PAMs at a higher efficiency than SpCas9: NGT (4.5-fold efficiency), NGC (2.1-fold), NGA (1.6-fold) and GAA and GAT (5.2-fold). The low increase in NGA editing efficiency fits the previous observation that NGA is a secondary PAM for SpCas9.

Employing xCas9 for transcriptional regulation and base editing

Base editor variants with xCas9 are similarly flexible. Like the xCas9 3.7 nuclease, xCas9 3.7 fused to third generation cytidine base editor architecture (BE3) slightly improves NGG PAM editing efficiency over that of SpCas9-BE3 (37 vs 28%). Cytidine base editing at NGT, NGC, GAA, and GAT PAMs is improved, with a smaller increase in NGA editing. Adenine base editor xCas9 3.7-ABE also follows the same pattern, with improved editing at an NGG PAM (69 vs 48%) compared to SpCas9-containing ABE7.10, as well as improvements at NG and GAT PAMs.

The development of xCas9 3.6 and 3.7 shows that we have only scratched the surface of modifications that can be made to Cas9. It is a pleasant surprise that selecting for one beneficial trait, PAM compatibility, also produced an enzyme with improved on-target and reduced off-target editing rates. This PAM flexibility should expand applications that require very specific targeting, like homology directed repair and base editing, to more loci.

Although these early data are exciting, there’s a lot we still don’t know about xCas9. “I’m not 100% sure xCas9 is going to be flat out better than SpCas9. I want everyone to test it because I want to know the answer", says Liu. We’re hoping that these answers come sooner rather than later. Once you’ve tried it, let us know how xCas9 is working for you in the comments section!