Deciphering the Mysteries of Behavior with Viral Vectors

Over the past decades, neuroscientists have made great strides to map brain regions and allocate specific functions to them. Electrical recordings and lesioning studies have been essential for this task. However, most lesioning methods destroy areas larger than intended and may unintentionally remove connecting pathways between other distant regions. They also don’t give any clues about the types of neurons involved or whether their involvement is activating, inhibiting, or modulating. Viral vectors, in contrast, are considerably more versatile and specific in how they manipulate neuronal function, with far fewer side effects compared to lesioning methods -  they may be the key to further unraveling the mysteries of behavior.

We’ve previously discussed some of the general considerations for performing behavioral tests, but now we’ll focus on how viral vectors have changed the scope and power of three commonly used behavioral assays - locomotion, anxiety, and depression.

To study and quantify locomotion, scientists monitor an animal’s movement in an open field box or a circular corridor apparatus using a camera or tracking software. Locomotion is a highly complex process on the level of individual neurons and in terms of their interactions with one another.

In addition to the neuronal networks involved in directly controlling muscle activity and coordinating movement, several additional brain areas that reflect motivational and other aspects may be involved. For example, an animal moving around to explore the environment has a different motivation (and brain areas associated) compared to an animal running to escape a threat. Locomotion can thus be used as a readout for associated emotional phenomena like stress levels, but researchers have to be mindful of motivation overlap. 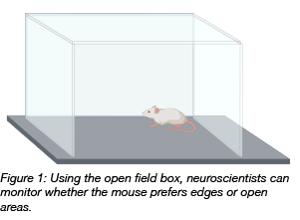 The locus coeruleus (LC) is known to play a major role in the stress response circuit by integrating neuronal signalling and triggering release of the stress hormone norepinephrine to promote vigilance. A recent study investigated the injection of AAV8 particles expressing an activating chemogentic receptor (hM3Dq) into a subset of neurons within the LC of mice. When those neurons are chemogenetically activated, norepinephrine release causes a freezing response, a form of immobility caused by stress and fear. Such a behavior can be monitored in an open field test (Alpar et al., 2018).

Locomotion can also be used as behavioral readout to study certain forms of drug addiction. When an animal has been exposed to morphine or other stimulating drugs, it develops an enhanced propensity for movement and activity called locomotor sensitization. This enhanced movement is thought to reflect elements of drug addiction and craving (‘seeking drugs’).

What’s involved in locomotor sensitization? Previous research has shown that regions such as the nucleus accumbens (NAc), which is linked to the reward circuit, and the medial prefrontal cortex (mPFC) are involved. Neurons from the mPFC project to the NAc, where enhanced glutamate transmission leads to locomotion sensitization. (for review see van Huijstee & Mansvelder  2014). Scientists from the University of Geneva (Creed et al., 2015) used optogenetics to support these existing findings by controlling neurons in the mPFC with light. Activation of these neurons via the channel Channelrhodopsin 2 (ChR2) reduced glutamate transmission from the mPFC projections to the NAc and decreased the locomotion of the animal. This confirms the previously suggested inhibitory mechanism of locomotor sensitization and might open new ways for a novel therapeutic approach against drug addiction. 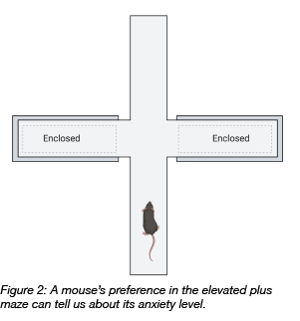 Rodents have a natural preference to stay in dark areas (protected) as opposed to brightly illuminated ones (risky). They also prefer to explore novel environments by initially moving along a wall (protected) rather than being out in the open (risky). Taking advantage of these characteristic traits, rodents can be used to study anxiety levels in general, or anxiety associated with psychiatric diseases such as schizophrenia or bipolar disorder. In both diseases, animals have reduced anxiety levels and a higher tendency for risk taking. These animals also show signs of neuroinflammation.

A study from 2014 (Howerton at al. 2014) investigated the connection between neuroinflammation and anxiety by modulating the production of the pro-inflammatory cytokine interleukin IL-1 beta in the dorsal raphe nucleus (DRN), a region thought to be involved in these diseases. The researchers injected Cre-expressing AAV-5 into the DRN of a transgenic mouse harbouring a Cre-dependent IL-1 beta overexpression cassette. Expression of Cre in these neurons turns on overexpression of IL-1 beta. They tested the mice in a series of behavioral tasks. One of these behavioral tasks was an elevated plus maze that measures risk aversion/anxiety. The mouse can move freely on a 4-arm cross and choose to stay on an open arm (risky), or a closed arm (safe). Mice with higher IL-1 beta production spent more time in the open arm and were less risk averse. 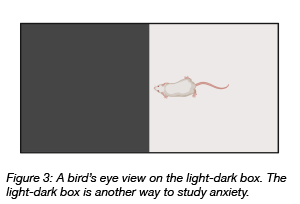 Similar to the elevated plus maze, the light-dark box is a simple device comprised of a brightly lit (risky) and a dark (protected) area. When measuring the time spent in a particular part of the apparatus, it turned out that the IL-1 beta overexpressing mice spent more time in the risky bright place, driven by their motivation to explore novel environments, rather than being inhibited by fear/anxiety. On the other hand, the control group preferred staying in the dark compartment (Howerton at al. 2014). Addgene has several recombinase-expressing ready-made AAV vectors which can be used in numerous floxed animal species for behavioral tests. 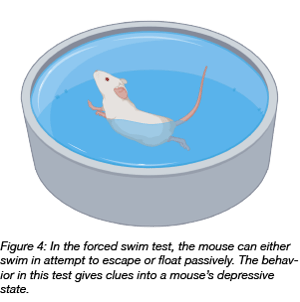 The forced swim test has been used since the 1970s to test the efficacy of antidepressant treatment in rodents. In this test, an animal is placed into a tank of water with no support from below or anything to hold on to. In general, two opposing behaviors are possible: active swimming in attempts to escape, or passive floating on the water surface. The latter reflects a state of behavioral despair, and the more time the animal spends in the passive mode, the stronger is the depressive component of the animal behavior. With the availability of transgenic animals and viral vectors, scientists are combining genetic manipulations with the forced swim test understanding the genetic background of depression.

One such genetic study focuses on brain derived neurotrophic factor (BDNF). BDNF is a small protein involved in neurogenesis, neuronal survival, and synaptic plasticity. Several studies have found reduced BDNF levels within the hippocampus and frontal cortex during depression, yet there have also been contradictory findings (Groves, 2007). A study from 2014 (Bahi et al., 2014) supports the relevance of BDNF in depression. The researchers found that injecting lentiviral vectors expressing BDNF in the hippocampus causes a shift towards antidepressant behavior in rats in the forced swim test as seen by increasing the ratio of time spent actively swimming versus passive floating. In the same paper, the authors used lentivirus to introduce an shRNA to downregulate expression of miR124a, a regulatory RNA that negatively regulates BDNF levels. They found that downregulating expression of miR124a achieved a similar improvement in the forced swim test.

Another brain region thought to be involved in depression is the medial prefrontal cortex (mPFC). In 2019, the Duman lab investigated this further and showed that the activity of a particular subset of excitatory neurons (Drd1) in mPFC is responsible for the antidepressant effect. To specifically activate the Drd1 neurons, they injected AAV2 particles into a Drd1-Cre transgenic mouse to deliver Cre-dependent expression of  Channelrhodopsin 2 (ChR2), a modified receptor protein that activates neurons upon light stimulation. When they activated the Drd1 neurons 24 hours before the forced swim test, they found that the mice swam actively more than those that were not (Hare et al., 2019).

The research described here is only a small selection of the increasing number of studies using viral vectors in behavioral neuroscience. With the ability of viral vectors to fine tune gene expression temporally and spatially, exciting times are ahead for behavioral neuroscience to reveal insights into the complex relationship between genes, neurons, and behavior. There are several other behaviors that scientists study such as sleep, food intake, mobility/coordination, learning, and memory. We’ll cover these in a  future blog post, so stay tuned!