The Challenges of Cell Culture

This post was contributed by ATCC Outreach Scientist Nick Amiss.

Cell culture in the present day 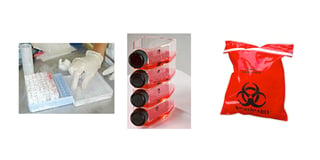 Cell culture is a widespread tool used in the fields of oncology, virology, immunology, microbiology, and pharmacology (many of which are represented in Addgene's Special Collections). Arguably, oncology has benefited most as cancer cells are amenable to culture in vitro. Virologists too have benefited from the ability to propagate viruses in cell culture; if there were no cells to infect, there would be no viable viruses to study. Interestingly, due to certain high profile problems surrounding cell culture over the last few decades some pharmacologists have tended to avoid cell culture in favour of biochemical assays followed by in vivo testing. The mantra being “you can’t trust those whacky cell lines”. This may certainly have been a valid concern for the discipline (or lack thereof) in times gone past but these days it’s never been easier to conduct high quality work in cell culture.

The problems with cell lines

Simply put, the majority of cell line problems come from people sharing cells: the black market of cell biology. Engaging in this practice would seem to save time and money but cells lose provenance (this is the history of the cell line consisting of records of the origin and propagation of the line, and can include assays for authentication and contamination) and cell lines can become cross contaminated and are invariably much older than those available from biorepositories leading to genotypic and phenotypic artefacts. The life science literature is a litany of false interpretation in cell culture for this reason. Unreproducible results are rife.

Misidentified or cross-contaminated cells have been known about since 1966 when Stanley Gartler reported that most of the 18 cell lines he had studied (the majority in those days) were in fact all contaminated with HeLa cells, the first immortalized human cell line. He proved this by examining whether the cell lines had isoenzymes and genetic polymorphisms specific to their origins. This technique is still used today to test for HeLa contamination. 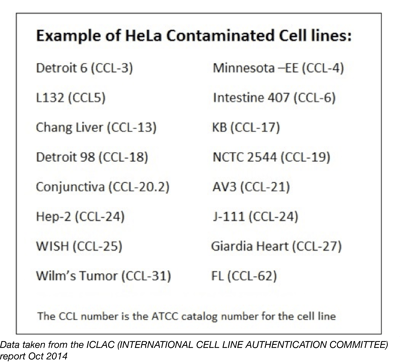 HeLa contamination is still a problem today. It is now known that nearly 500 cell lines suffer from contamination with HeLa being the most frequent contaminant, closely followed by T24 bladder cancer cells. Estimates of the amount of money wasted in basic oncological research due to contamination are in the tens or hundreds of millions, let alone the human cost. Here are just a few publications which have since been retracted due to cell line contamination: Epithelial Mesenchymal Transition Is Required for Acquisition of Anoikis Resistance and Metastatic Potential in Adenoid Cystic Carcinoma, Up-Regulation of pVHL along with Down-Regulation of HIF-1α by NDRG2 Expression Attenuates Proliferation and Invasion in Renal Cancer Cells, Marker-independent identification of glioma-initiating cells. The International Cell Line Authentication Committee includes a database listing all cross contaminated or misidentified cell lines.

Fortunately it has never been easier to conduct high quality cell culture. Biorepositories around the world ensure that the cell lines deposited with them and used by different researchers are free of contamination and match their original description. The oldest, largest, and most diverse of these repositories is the American Type Culture Collection aka ATCC where I work. It is virtually impossible to work in cell culture, microbiology, or virology without acquiring materials from this bank.

I am often asked, “What is the difference between materials available from commercial repositories and the same cell line from a colleague?”. The main difference is the QC and validation carried out by the commercial repository. Repositories generally ensure cell line identity and purity making it easier for comparable studies to be performed on a cell line even decades after it is initially isolated. Regrettably this is not usually the case if you obtain a cell line from a colleague. Time and money are wasted, papers are retracted and there is a loss of reputation that can impede collaborations, especially with industry.

Today we also have the appropriate tools to verify our cells lines. Even if you get your cells from a repository like the ATCC, there are times when it is important to check their identity. For example, perhaps a working cell bank has been made by a research institution (an excellent practice), or maybe cells have been in culture for an extended period of time (>10 passages or >3 months). Other times cell lines are unavailable from the official biorepositories or have been directly isolated from patients. In these cases, a test known as Short Tandem Repeat (STR) profiling can be used to ID the cell line. The same test is so good that it is used as a forensic technique (aka DNA fingerprinting) that can place suspects at the scene of a crime (every human in the world has a unique STR profile) and can also be used as a paternity test. The test is accurate, precise, robust, and STR profiles are available for all the major cell lines on public databases. The key is good recordkeeping, you need to have a way of tracking how many passages the cells have undergone and when to throw them away and thaw a new batch. The exact number of passages can vary between cells lines, as this can be dependent on the mutation rate of the cell line, but it is broadly recommended that the lower the passage number the better for experiments. This is to ensure the cells are as close to the original as possible and so any results generated are reproducible and reliable.

When you order a new cell line you will need to grow this initial stock and create a set of vials of ‘Master’ stock, which can be stored in liquid nitrogen long term, preferably some of these vials will be stored in a separate backup liquid nitrogen store to prevent loss from equipment malfunctions. One Master vial can then be thawed and used to produce a set of ‘working’ stocks of cells. Working stocks should be frozen in multiple vials and thawed to produce a new batch once you’ve passaged your current batch too many times or you suspect there is contamination. You would never thaw any of the Master cell vials until all of the working vials have been used up. This ensures you can retain the maximum stocks and use of the original Cell line you purchased, keeping all experiments carried out on low passage cells and this means you can regularly discard the cells you are working with because you have plenty of maintained freezer stocks.

It is vital that the Master and Working stocks of cell lines have the passage number recorded on the outside of the vial and in a cryostore log. Keeping good passage records allows you to track a cell line’s age and monitor any changes. Your tracking system could be as simple as a piece of paper on the front of the incubator containing the passage number, cell line, and date, which you complete each time you passage the cells (as well as recording this information in your lab book and on the actual flasks of cells in the incubator). This means any other scientist who wishes to use these cells can see their passage number and key details at a glance. You should also monitor the stock levels you have in liquid nitrogen for your Working and Master stocks of each cell line. Once all Master vials have been thawed, it is time to reorder this cell line to create new Master and Working stocks to work from.

Attitudes are changing but yet more is needed to convince people of some of the basic tenets of responsible cell culture outlined in this article. Now many journals strictly require evidence of cell line provenance and identity. The Nature Publishing Group recently reiterated its strict stance on the matter. Funding bodies such as the Biotechnology and Biological Sciences Research Council (BBSRC) and Medical Research Council (MRC) require authentic cells to be used and STR profiling to be conducted during projects to ensure the results are reliable. With this two-pronged approach, the many mistakes of the past can be prevented and we can progress faster to desired clinical endpoints.

Nick Amiss is an ATCC Outreach Scientist at LGC Group, London, which is the European distributor for ATCC. He studied biochemistry at Warwick University, gaining extensive cell culture research experience through working for a variety of pharmaceutical companies including GSK, AstraZeneca-MedImmune, and Infors & Applikon. Due to his high level of experience he now travels around Europe giving talks and seminars on cell culture and other pharmaceutical topics. The LGC Group also provides standards and has laboratories to carry our independent quality control for a range of testing, from animal doping to forensics, DNA sequencing to drug testing. You can find Nick on LinkedIn.