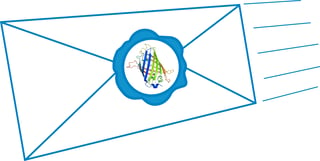 This post was contributed by guest blogger James D. Fessenden, an Assistant Professor at Brigham and Women’s Hospital.

Biochemists often struggle to understand how a protein of interest actually behaves. How large is it? What parts of it move when you feed it substrate or add an essential cofactor? How many binding partners does it have and how do they come off and on in a cellular environment? If these are pressing issues in your laboratory, then FRET experiments are a viable biophysical path to answers.

What is FRET and what's it good for?

Fluorescence resonance energy transfer (FRET) is a biophysical interaction between two fluorophores. When the first fluorophore (the donor) is excited, it can transfer energy directly via resonance to the second fluorophore (the acceptor) if the two probes are close together (typically 30-100 Å, depending on the probes). In fact, FRET can be used to derive a precise physical distance between the donor/acceptor fluorophores (Stryer, 1978), a measurement that is unaffected by intervening proteins, lipid bilayers, organelles or other cellular impediments.

FRET has been used in many applications, including drug discovery by big pharma (i.e. HTRF and LanthaScreen) (Degorce et al., 2009), measuring intracellular calcium (Miyawaki, Griesbeck, Heim, & Tsien, 1999), monitoring kinase activity (Ni, Titov, & Zhang, 2006), quantifying antibody/antigen interactions (Saraheimo et al., 2013), and visualizing structural changes in the ribosome during protein translation (Ermolenko et al., 2007). All that is required is that the proteins/nucleic acids/lipids of interest are fluorophore labeled and that these fluorophores can undergo FRET when they are near each other.

How do you label your biomolecule of interest with FRET fluorophores? When is absolute labeling specificity needed and when is it not? What are the proper controls needed to pressure-test your FRET assay to make sure it is working? This article addresses these questions, which are critical in setting up a FRET-based assay or screen (the Addgene blog has an excellent primer on FRET and how to measure it).

Molecular mailbox: How to get your fluorophore delivered to the right place?

One important concept in FRET experimental design is that the targeting specificity requirements are different for the donor and acceptor fluorophores. The donor must be delivered to an exact spot (a single mailbox at a specific house in your molecular city). However, the acceptor doesn’t need to go to the same exact location as the donor. As long as some of the acceptor molecules are targeted nearby (such as a neighboring house on the same street as the donor), then FRET measurements are possible. In fact, even if the majority of FRET acceptors are delivered to the wrong address in a different city, you can still develop a successful FRET-based assay since energy transfer only occurs when donor and acceptor are close together. The binding of acceptors >100 Å away from the donor doesn’t result in energy transfer and thus, your specific FRET signal is unaffected

Due to these fundamental differences in targeting specificity for donor and acceptor fluorophores, it’s best to consider these cases separately when talking about the tools that are available. Let’s consider the donor first where labeling specificity is most important.

Donor labeling and the need for specificity

Donor fluorophores need to go to the right place. Mis-targeted donors never “see” FRET acceptors, and thus never undergo FRET. If this nonspecific labeling far exceeds properly targeted donor/acceptor pairs, then any measureable FRET will be swamped out by a sea of uncoupled donors.

The best method for targeting a fluorescent donor to your protein is to hardwire the molecule directly into the protein’s peptide sequence. Thus, all synthesized target protein molecules contain the donor and, more importantly there is no fluorescence background resulting from nonspecific donor labeling.

Fluorescent proteins (FPs) are the gold standard for genetically-encoded FRET donors (Fig. 1). Scores of FP variants have been created, thereby enabling a broad spectrum of donor fluorescence wavelengths for FRET experiments. However, remember that, if you make an FP fusion, you are inserting about 20-25 kDa of protein mass into your protein and so structural changes due to this bulky insertion are inevitable. Most FP fusions for FRET studies are at the N- or C-terminus of your target protein, but even these modifications can affect the structure or function of certain proteins.

Rather than shove a bulky FP into your protein, you can site-specifically label it with finesse using tRNA suppression technology (Fig. 1) (Dumas, Lercher, Spicer, & Davis, 2015). By using a novel aminoacyl tRNA synthetase/tRNA pair, a researcher can lure the ribosome into inserting a fluorophore-tagged amino acid at a stop codon (often amber i.e. UAG) engineered into a desired site. During translation, the novel tRNA/unnatural amino acid finds the UAG codon in the ribosome, resulting in site-specific incorporation of the attached fluorophore. However, since tRNA suppression competes with natural chain termination at stop codons, expression levels of these tagged proteins are often very low. In addition, a major overhaul of the cell’s native tRNA synthetases is required and thus far, this method has proven most effective only in a few cell types (E. coli and Xenopus oocytes, mainly). Nevertheless, tRNA suppression plasmids are available from depositing labs that have mastered this technique so it might be worth a try, especially since the potential rewards could be substantial:

Acceptor labeling: Sometimes it's okay to be wrong

In contrast to FRET donors, absolute FRET acceptor labeling specificity is not always necessary for successful FRET experiments. If the acceptor fluorophore is getting to a molecular mailbox that is close to the donor, faulty delivery to other locations in the cell are not a problem, as long as they are beyond the FRET range of the donor (i.e. >100 Å). Researchers have developed an extensive array of chemical labeling strategies suitable for targeting FRET acceptors to proteins (reviewed in [Yan & Bruchez, 2015]). To get you started, two robust orthogonal labeling strategies are presented (Fig. 1) which can be carried out using Addgene plasmids. 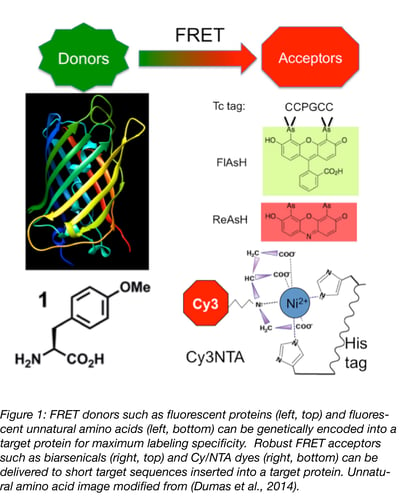 You may already have a FRET acceptor-binding site on your protein of interest: you just don’t know it yet! The poly-histidine tag often used for protein purification is a reliable FRET acceptor labeling site when used in conjunction with Cy dye-nitrilotriacetic acid (NTA) conjugates (Kapanidis, Ebright, & Ebright, 2001). These Cy/NTA conjugates work the same way as NTA-sepharose beads used for protein purification: the NTA binds to the His tag on your protein and the coupled Cy fluorophore acts as the FRET acceptor. Binding affinity can be enhanced by coupling two NTA molecules to each Cy dye, as well as by extending the length of the histidine tag from 6 to 10 residues. While these Cy/NTA conjugates are not commercially available, they are easily synthesized with reagents used to fluorescently label antibodies, and purification is a snap using thin layer chromatography (Fessenden, 2009). However, these reagents can bind numerous endogenous biomolecules in cells nonspecifically, and they cannot cross cell membranes, so they are best used either with plasma membrane proteins (such as GPCRs, ion channels, or cell surface receptors) or with experiments on permeabilized cells.

If you want to label intracellular proteins covalently with FRET acceptors, then biarsenicals are a good option. Originally developed by Roger Tsien and co-workers (Griffin, Adams, & Tsien, 1998), these dyes are now commercially available as Lumio Green and Lumio Red from Invitrogen (now ThermoFisher Scientific). These reagents are nonfluorescent until they bind a 6-residue tetracysteine tag (sequence: CCPGCC) that can be inserted into the target protein. The utility of these reagents is that binding is covalent, so free dye can be washed away. In addition, labeling contrast can be improved using disulfide-containing compounds such as British anti-Lewisite (which was originally developed to treat heavy metal intoxication in chemical warfare [Vilensky & Redman, 2003]). Most importantly, these compounds cross cell membranes, thus enabling FRET measurements in intact cells. The Gradia Lab has deposited a gateway vector with Addgene, where you can insert your protein of interest, resulting in a C-terminal fusion of a tetracysteine tag. In addition, since these tags are so small, one can insert them in virtually any desired location in a target protein, though predicted unstructured loops are best since these tags form beta-hairpins (Madani et al., 2009).

Donor and acceptors: Putting it all together 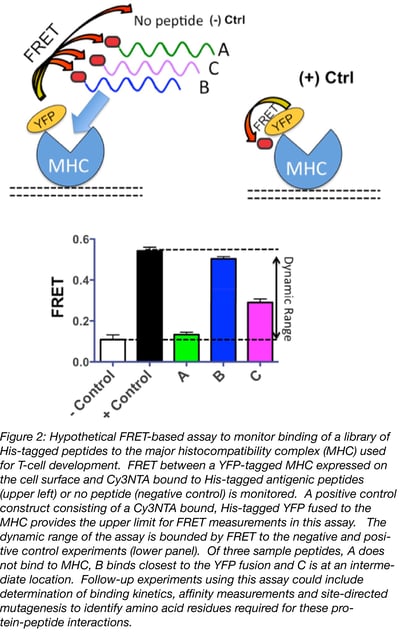 The FRET donors and acceptors described above can be paired together to measure a wide range of molecular distances (see Table). However, proper control experiments are needed to establish the dynamic range of your assay. These experiments include producing a positive control construct where the donor and the acceptor fluorophore binding sites are adjacent to each other on the same protein and a negative control experiment conducted on donor-only labeled protein that is incubated with your FRET acceptor. These experiments will define the maximum and minimum energy transfer values you can expect, thereby establishing the dynamic range of your FRET assay (Figure 2).

These labeling methods are freely interchangeable and new uses for FRET are continually being developed, so don’t be afraid to try novel, unpublished combinations of labeling strategies. FRET experimental design lends itself to creativity and innovation, valuable commodities in any NIH grant application! Using FRET, you may gain a new structural understanding of your protein that can lead to novel insights about its biology and its behavior. See the table below for donor and acceptor pairs that you can use in your FRET experiments.

a R0 is the donor/acceptor (D/A) distance at which 50% FRET occurs.

b Range corresponds to calculated D/A distances for observed FRET efficiencies between 80% and 10%.

Many thanks to our guest blogger James D. Fessenden!