Savvy Advocates Needed to Navigate a Scientific Enterprise in Flux 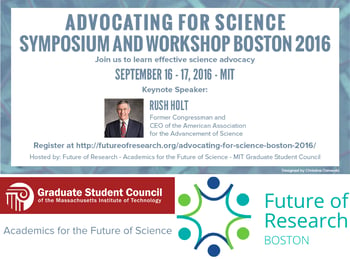 The Advocating for Science Symposium and Workshop, organized by Future of Research, Academics for the Future of Science, and the MIT Graduate Student Council will be held on Friday 16th and Saturday 17th September respectively. Join us to discuss advocacy efforts toward positive change in the scientific enterprise and the way it is funded and to learn tangible skills necessary for affecting change. On Friday, the symposium includes a panel discussion and keynote by former congressman and CEO of the American Association for the Advancement of Science, Rush Holt, followed by a networking reception. Saturday’s workshop will be an advocacy skills “bootcamp” for a focused group of participants. More information can be found at http://futureofresearch.org/advocating-for-science-boston-2016/.

Sign Up For the Advocating for Science Symposium Boston 2016

Changes since the Future of Research Symposia 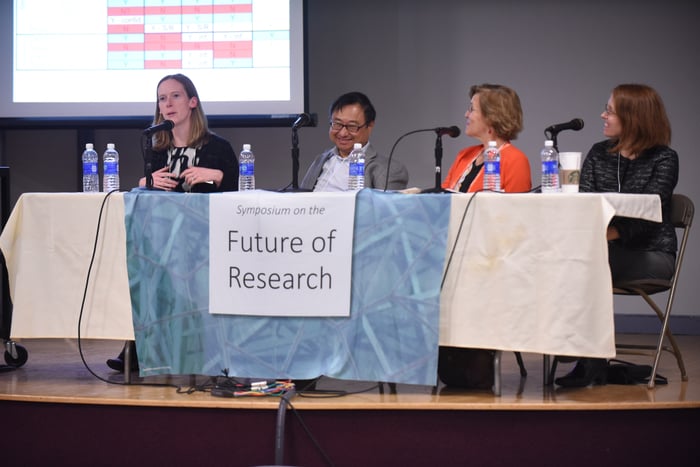 Ongoing challenges facing the scientific enterprise and the way it is funded have been well documented over the past 2 years (Alberts et al, PNAS 2014; Taylor, eLife, 2016). Several Future of Research (FoR) symposia held across the USA during this time have revealed that young scientists are aware of, and are engaged in, these issues which will continue to shape the sector throughout their careers (McDowell et al, F1000Research, 2014; Dolan, F100Research, 2016). These events have also started progress towards solutions. The 2015 Boston FoR meeting was designed to explore areas where further data is necessary to determine the best solutions. The event also culminated in a joint American Society for Biochemistry and Molecular Biology/ FoR Hack Day during which several projects were initiated.

Recent developments promise to further change the landscape facing all scientists, both young and established, as they embark on or continue their careers in science-related fields. In particular, two recent events have the potential to influence both graduate students and postdocs broadly – and thus PI’s and institutions in turn.

The first is the passing and upcoming implementation of the Federal Labor Standards Act (FLSA) which mandates that all workers across the country either be paid more than $47,476 or be eligible for overtime pay. For many postdocs this will lead to a raise in salary, particularly given that this has precipitated increases to the NIH recommended pay scale – used by many institutions to set postdoc wages.

The second event of note is a ruling in August by the National Labor Relations Board to allow graduate students who work as teaching or research assistants to join unions. The topic of unionization continues to be a polarizing one. High-profile universities remain outspoken in their opposition to unions, potentially signaling a rough road ahead for students interested in leading the process despite the recent advance. Similarly, grad students throughout universities that are further down the path of unionization remain mixed in their opinions on the subject – for example, Yale graduate students filed for union elections in only 10 departments across the university. Collective bargaining may provide a better deal for students in areas such as teaching salaries, healthcare access, and benefits; however, this may come at the cost of flexibility to address the unique needs of students from different departments across the university and alterations to the student-university relationship, along with, of course, union dues. Time will tell the extent of the implications of this ruling and whether graduate students will pursue this newly available avenue.

Interestingly, both of these changes share a common thread that has the potential to profoundly shift the academic science landscape: the treatment of trainee scientists as workers, at least for the purposes of labor laws, rather than as trainees in a special category, as has been the ‘labor-of-love’ philosophy of academic science to date.

Advocacy opportunities for the future

No matter your opinion on these changes, it is likely that the shifts caused to the practical and philosophical landscape of the scientific enterprise will provide challenges and opportunities for us all.

For example, implementation and compliance for the FLSA changes, including finding money in already tight lab budgets and even simply being able to categorize all postdocs at institutions, will be challenging. At the same time, there is much opportunity to make headway on long-term efforts to better account for and track postdocs nationwide. On this level, FoR is currently compiling a database of institutional responses to the FLSA ruling. Similarly, from purely a salary perspective, while this is a move in the right direction, the increase notably still does not meet the suggested postdoc salary ($50,000 + adjustments for regional cost of living and inflation) and benefits that were laid out by a 2014 National Academy of Sciences working group (National Academy of Sciences. “The Postdoctoral Experience Revisited” 2014 Appendix B p93-95). For those advocating in this area, keeping the pressure on for further increases will be challenging, but will be aided by the development and implementation of new strategies designed to cope with current increases.

These two rulings along with progress over the past two years give young academic scientists a foot in the door, but we will only realize their full potential if we are able to successfully advocate for the opportunities they present. Similarly, ongoing issues that affect all scientists; such as governmental science funding and funding mechanisms require an engaged sector with effective advocacy skills.

Advocating for Science Symposium and Workshop 2016

At past symposia, FoR worked to highlight some of the problems facing postdocs and graduate students, and started to define solutions but this year, together with Academics for the Future of Science and the MIT Graduate Student Council, we shift our focus toward advocacy and action with sessions specifically chosen to better define productive routes for advocacy efforts and help participants develop the efficacy of their advocacy skills.

Friday’s symposium will include a discussion on effective advocacy strategies on various levels, with panelists including:

The symposium will culminate with a keynote address by former congressman and CEO of the American Association for the Advancement of Science, Rush Holt, PhD and a networking reception.

Saturday’s workshop will progress through the many aspects of effectively advocating for change: from developing a strategy to distilling a message for the appropriate audience and communicating that message in various ways. Workshops will be run by experts in their respective fields:

Developing effective science advocates is an important way to push the balance from challenge to opportunity. We hope to see you at the upcoming Advocating for Science Symposium.

Many thanks to our guest blogger, David T. Riglar.

David T Riglar is a postdoc at Harvard Medical School. In the lab, he uses synthetic biology to create tools to better understand human disease.  Outside the lab, he is interested in communicating science and in the intersection between science and public policy. Follow David on Twitter @driglar.