The Future of Research Symposium Boston 2015

The Future of Research Symposium 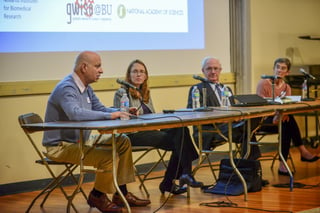 A year ago, trainees from around Boston met to discuss their visions for a successful and sustainable biomedical research sector at our first Future of Research symposium. The talks and workshops held at this event added to a growing dialogue on the state of a system that, despite all of its successes, has many deep-rooted flaws (1).

As we discovered through the four workshops at the Future of Research Symposium 2014, young scientists are acutely aware of these problems that directly affect their daily lives and future prospects.

Among the topics discussed, many related to the structure of the biomedical workforce. Quotes taken directly from participants (summarized in 2) touched upon many problems in this area:

“Lack of awareness about how the system operates and functions”

“Complete lack of information on number of postdocs”

“Postdocs are really hired to produce results, not scientists”

These comments are well correlated with published data. For example, in 2010, less than 15% of postdocs had achieved tenure-track positions within 5-7 years of earning their PhDs (3), showing that the ‘standard’ pathway into academia may in fact be just another ‘alternative’ career.

The news is not all bad, however - there are some signs that the tides may be turning. In 2013, the NIH announced its first round of Broadening Experience in Scientific Training (BEST) awards, which are designed to support new approaches that address the need to train our young scientists for futures both inside and outside of academic research (4).

There are currently 17 sites around the USA undertaking BEST programs, including local schools in Boston: the Boston University School of Medicine and the University of Massachusetts Medical School. Graduate education programs are also beginning to address these issues independently; for example, Harvard’s Therapeutics Graduate Program has a compulsory internship to be taken in an industry, regulatory, or clinical environment.

It remains contested, however, whether a better solution would be to reduce the number of entrants into PhD programs to more closely reflect the number of positions available in academia (5, 6).

Academic data and the labor market for PhDs

Later this week, postdocs and students will again gather in Boston - this time with the aim of finding solutions to some of the problems that were identified last year.  In particular, at the symposium we will discuss where better data is needed to help shape and inform the overall structure of the biomedical research sector, and what a tenable workforce structure may look like.

The panel discussion on Friday morning will be dedicated to Academic data and the Labor Market. On this topic it is clear that many important questions, areas for informed discussion, debate, and data collection still remain:

Helping to answer some of these questions, and posing some of their own are the following panel members:

This will be the one of 6 great panels at the Future of Research Symposium Boston 2015 where we hope to begin developing concrete solutions to the problems looming over the academic research enterprise. Other panels will discuss the nature of the postdoc experience from the perspective of both grassroots organisations that represent postdocs and institutes that employ them, the diversity of trainee backgrounds, publishing from a young scientist’s perspective, and the many different paths that biomedical graduates take in their future careers.

To participate in the Future or Research Symposium Boston 2015 you can register here or live stream the event on October 22nd and 23rd here.

Many thanks to our guest blogger David T. Riglar!

David T Riglar is a postdoc at Harvard Medical School. In the lab, he uses synthetic biology to create tools to better understand human disease.  Outside the lab, he is interested in communicating science and in the intersection between science and public policy. Follow David on Twitter @driglar.