Protein Tagging with CRISPR/Cas9: A Conversation with Mendenhall and Myers 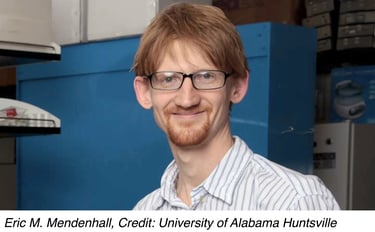 As Eric Mendenhall of the University of Alabama in Huntsville explains it, a major goal in his laboratory is to understand the function of the non-coding portion of the genome. Mendenhall and Richard Myers of HudsonAlpha (where Mendenhall is also an adjunct faculty member) have together been working toward this goal for years as members of the ENCyclopedia of DNA Elements Project (ENCODE), an NIH-funded effort to define all of the functional elements in the human genome.

The pair has focused considerable attention on transcription factors, starting with an established method called ChIP-seq. ChIP-seq relies on antibodies to recognize and bind transcription factors directly, but that’s a slow-going process and it doesn’t work in many cases. In an effort to track down every last one of those gene regulatory proteins and the places in the genome where they can be found more quickly and efficiently, they’ve recently adapted the CRISPR/Cas9 system for protein tagging.

We spoke with Mendenhall and Myers about their new CRISPR tagging system, which they’ve now made available at Addgene. For more details on the plasmids that are currently available along with detailed protocols, go to www.addgene.org/crispr/tagging.

Addgene: What motivated you to adapt CRISPR for use in protein tagging?

Myers: Our labs work really closely together on several projects and this is one related to gene expression. One goal of the ENCODE project is to look at all 1,500 or 1,600 transcription factors and figure out where they bind to the genome. We’ve been doing that for years using this assay called ChIP-seq, but it’s really hard for lots of transcription factors. Our groups got together to adapt CRISPR for tagging experiments and it’s already looking like it’s making a big difference. We can now look at many more transcription factors.

Addgene: How does the system work?

Mendenhall: The system is really quite simple but it offers improvements in efficiency and throughput. In adapting the CRISPR/Cas system, what we are doing is adding in a second plasmid to target an epitope tag onto the transcription factors. By the way, you can actually use this for tagging any protein in all kinds of different assays, not just transcription factors.

The second vector is a homology directed repair donor plasmid with homology arms and a selection marker. If things work correctly, the second plasmid inserts a small epitope tag called FLAG at the end of the transcription factor. It also gives cells antibiotic resistance to neomycin so that you can select the population of cells with the tagged transcription factor.

The FLAG antibody has been well characterized and the system allows you to add this same antibody to any protein to get really beautiful ChIP-Seq results. The FLAG epitope is quite small—20 amino acids—so we don’t think it interferes with the function of the protein.

Addgene: What advantages does your system have in this context?

Mendenhall: The benefits are two-fold: CRISPR/Cas9 offers high efficiency of inducing double strand breaks and more opportunity for homologous recombination. Before CRISPR, that recombination was a one in a million event. Now it’s maybe one out of 100 or 50 event. Cloning of the second plasmid can be done in one day in one assembly reaction. This second plasmid saves you a couple of weeks. CRISPR saves you a couple of months. It’s higher throughput and faster. It’s also easy to run things in parallel.

Addgene: Besides being fast and efficient, what other challenges does this system help to solve?

Myers: Only a small percentage of the proteins inside a cell have a commercial antibody against them. There’s also a question about how specific those interactions are. This is solved in this CRISPR system with a universal antibody. It’s an epitope not found in human or other cells. It was made artificially. That means you aren’t getting any background or cross-reacting. We’ve developed this for transcription factors, but there are many reasons you might want a system like this. It’s actually surprising to us that there aren’t a hundred different versions of this out there.

Addgene: Why was it important to you to make these plasmids available to other scientists quickly?

Myers: We were hoping to figure out how to do this for many hundreds of transcription factors. We wanted something that would allow automation. This design cuts out weeks of waiting and hands on labor. That’s a huge deal. With Addgene, now these can be available to anyone for a modest cost without having to start all over or write to us to get them. Even though we’re happy to provide them, that never works on a large scale. The world is too big now.

Mendenhall: So many groups have been struggling with this antibody problem. We thought it was the right thing to do to put these out there. It’s a simple solution. It would be silly not to share it as soon as possible.

Addgene: How much interest are you seeing in this new tool?

Mendenhall: We’ve already received many requests since we presented on this at the ENCODE Consortium in Cold Spring Harbor in March. A number of groups were excited and asked for the protocol. Since the Addgene page went up last month, over 340 people have signed up to receive alerts when plasmids become available.

We’ve also had some requests for variations on the plasmids we’ve developed. We’re working on that, but the system is so flexible. Other investigators can easily adapt these vectors for use with their favorite selection cassette. They could also switch from FLAG to GFP or a different epitope.

Addgene: Do you have any additional tips, tricks, or words of advice for people who may want to apply this tagging system to their own work?

Mendenhall: We’ve made the protocol available here. There were a few bumps we went through and we hope other groups can avoid that. One thing we found is that it’s really smooth to order the homology arm as a gBlocks® Gene Fragment from Integrated DNA technologies. Generally speaking, anyone using CRISPR/Cas9 in the lab already should be able to run this protocol as well.

We would also like to put some social pressure on many other labs that may be doing something similar. There may be other variants of this that are better for some experiments than those we’ve put up. We would encourage those who’ve developed their own system or who use and adapt our reagents to think about adding them to Addgene’s special collection of CRISPR tagging systems.

Thank you to Professors Mendenhall and Myers for speaking with us!