Popular Retroviral Vectors and Their Uses in Scientific Research 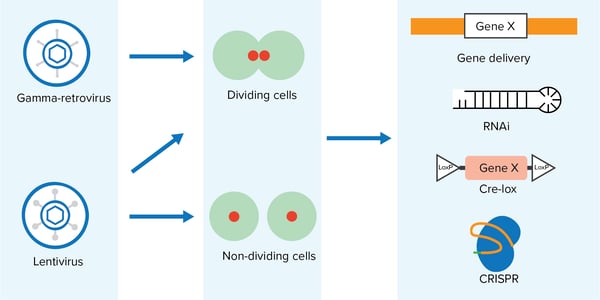 Viruses are intracellular parasites and natural vehicles for genetic information. Therefore they make excellent tools for genetic engineering. There are several different viral vectors to choose from, for example gamma-retrovirus, lentivirus, Adenovirus, and Adeno-associated virus (AAV). If you are wondering which virus fits you experiments best have a look at this viral vector overview.

Viruses of the Retroviridae or Retrovirus family, which includes the gamma-retrovirus and lentivirus genera, have the unique ability to integrate permanently into the host genome and thereby enable long-term stable gene expression. Gamma-retroviral vectors are derived from the Moloney Murine Leukemia Virus (MoMLV, MMLV, MuLV, or MLV) or Murine Stem Cell Virus (MSCV) genomes whereas lentiviral vectors are derived from the human immunodeficiency virus (HIV) genome.

For research purposes, retroviral vectors have been developed into ‘split-vector systems’ by separating viral genes and transgene expression across several plasmids. The most commonly used viral vector systems are made up of separate envelope and packaging plasmids as well as transfer plasmids. This concept ensures safe handling and expression of these vectors when used in experiments.

Lentiviral vectors are very versatile tools as they are able to transduce dividing and non-dividing cells. More detailed descriptions of the lentiviral elements and the 2nd and 3rd Generation Lentiviral Systems can be found in our Lentiviral guide. Popular packaging and lentiviral envelope plasmids are listed here. Please note that both lentiviruses and gamma-retroviruses use the same gene products for packaging, however, the isoforms of these proteins, as well as the viral LTRs differ. Therefore, lentiviral and gamma-retroviral packaging plasmids are not interchangeable. General envelope plasmids, such as VSV-G, may be used across both systems.

Below I provide a brief overview of a few popular gamma-retroviral and lentiviral vectors that are used for gene regulation, gene of interest expression, knockout, and screening. There are many more useful viral vectors available at Addgene: Follow our viral vector blog posts for updates on the most recent deposits, protocols, and tips for using retroviral vectors in your experiments.

Expressing your gene of interest

Retroviral vector for cloning and expressing your gene of interest with puromycin selection. One of the scientists who created pBabe writes how its name came about here.

RNA interference (RNAi) is an RNA-mediated gene silencing mechanism. Scientists can express siRNAs to direct the cellular RNAi machinery to silence target genes. This empty MuLV vector from the Weinberg lab enables researchers to express siRNAs of their choice in mammalian cells.  Learn more about Mammalian shRNA Tools for RNAi!

This retroviral vector from the Gage lab encodes GFP and Cre-recombinase. The Cre-lox system is a technology that can be used to induce site-specific recombination events and is widely used in the field of mouse transgenics. Experimental uses include: Cre-dependent gene expression, gene knockout, and selection marker removal.

The Winslow lab barcoding library consists of 96 retroviral plasmids (based on the Murine Stem Cell Virus, MSCV) each with a unique 6 nucleotide barcode. This collection can be used for in vivo phenotypic screening of small-molecule libraries and can be combined with high-throughput sequencing to perform multiplexed analysis of cells pre-treated with a compound of interest.

Expressing your gene of interest

You can clone your gene of interest into this tetracycline inducible, 3rd generation lentiviral vector backbone from the Shih lab. You can find more lentiviral expression vectors (empty backbones) here.

This plasmid has been used by The RNAi Consortium, also known as the Genetic Perturbation Platform, to produce their shRNA library to support functional investigations of the mammalian genome that can reveal how genetic alterations lead to changes in phenotype. The plasmid comes with a 1.9 kb stuffer sequence that can be removed and replaced with an shRNA sequence of your choice. More information and a detailed protocol on how to use the pLKO.1 vector can be found here.

This is a lentiviral vector deposited by Dr. Tyler Jacks. It carries CRE recombinase and a puromycin resistance cassette.

No time to produce virus? Get the ready-to-use lentiviral prep from the Addgene viral service.

This is a 3rd generation lentiviral backbone from the Zhang lab expressing S. pyogenes Cas9 and a gRNA cassette. It can be used to produce a ~10-fold higher titer of lentiviral particles than the original lentiCRISPR v1.

Special note from the Zhang lab: We are constantly improving our CRISPR reagents. Please check www.genome-engineering.org for the most up-to-date information.

Check our CRISPR guide and blog to learn more about CRISPR and the most recent developments in the genome editing field.

This modular and flexible system can be used to construct complex lentiviruses for modification of mammalian cells with a single viral infection.

Additional Resources on the Addgene blog