If cloning methods had personalities, SLIC (sequence- and ligation-independent cloning) would be a true rebel. Not only does this system not use site-specific recombination, it also doesn’t require a ligation step! Based on the robust system of homologous recombination found in E. coli, SLIC is a cheap, standardized, and rapid multi-part DNA assembly method - read on to learn how to use it in your research.

Ligation-independent cloning (LIC) was first developed in the 1990s. While traditional restriction enzyme cloning used short sticky ends, LIC employed the exonuclease activity of T4 DNA polymerase to create longer, “chewed-back” overhangs of about 10-12 bases. Only one type of dNTP would be present in the reaction mix, limiting the exonuclease activity to the first occurrence of that nucleotide. At that position, T4 would perform the favored polymerase reaction and subsequently stall due to the absence of other dNTPs. Once digested separately, the vector and insert could be annealed, forming a circular product with four nicks easily repairable by the bacteria after transformation.

LIC is a reliable cloning method, but it is limited by its sequence constraints. The 10-12 base overhangs must not contain the dNTP present in the reaction, or polymerization will occur at that position, preventing T4 from chewing back the entire 10-12 bases. As such, the use of LIC is often limited to specially-designed plasmids.

In 2007, LIC received an important update, courtesy of Addgene depositor Stephen Elledge. His new method, named sequence- and ligation-independent cloning (SLIC), eliminates many of LIC’s constraints. Key to SLIC is the power of homologous recombination. In E. coli, a robust homologous recombination system allows for the repair of gaps and overhangs based on regions of sequence homology. This process can occur through one of two pathways: RecA-mediated recombination or RecA-independent single-stranded annealing. Elledge realized that he could generate imperfect “recombination intermediates” through PCR and imprecise T4 exonuclease activity, overcoming the requirement for carefully designed DNA overhangs used in LIC.  As long as there was enough sequence homology (20-60 bp) to organize the fragments and hold them together, E. coli would be able to “repair” the plasmid, generating recombinant DNA. Adding purified RecA to the pre-transformation incubation enhances the repair process, allowing SLIC to be used with very small amounts of DNA (e.g. 3 ng). When working with larger amounts of DNA (~100 ng,) RecA is not required.

The practicalities of being SLIC 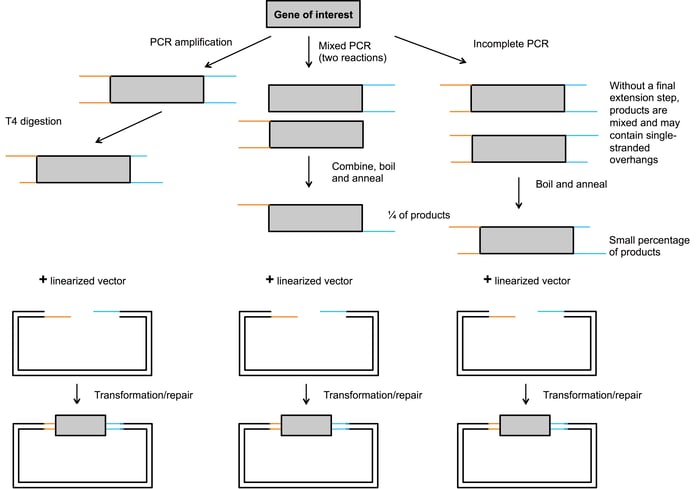 To start the SLIC cloning process (see figure above), a fragment of interest is PCR amplified to add the specified 5’ and 3’ homology regions. This PCR fragment and linearized plasmid are both partially digested using T4 polymerase in the absence of dNTPs. In the second step, the addition of a single dNTP stops the exonuclease reaction. The PCR fragment and plasmid are then combined, annealed, and transformed into E. coli. To make matters even easier, SLIC is also compatible with incompletely synthesized, or iPCR, fragments (right branch of the figure above). If PCR does not include a final extension step, many of the products will have single-stranded overhangs due to incomplete extension, and these fragments can induce recombination. Mixed PCR, shown in the middle branch of the above figure, can also be used to create an insert. Two PCR products are used to generate a target gene with a 5’ or 3’ overhang. When the products are mixed and annealed, 25% of the resulting DNA will have two single-stranded overhangs that can robustly stimulate recombination.

SLIC is ideal for multicomponent assembly (see figure below), as overlapping sequence homology specifies the order of multiple fragments, and the assembly is scarless. With 40 bp homology regions, a five piece assembly reaction is highly efficient (~80%.) Ten-fragment assembly can also be successful, but at a lower efficiency (~20%). 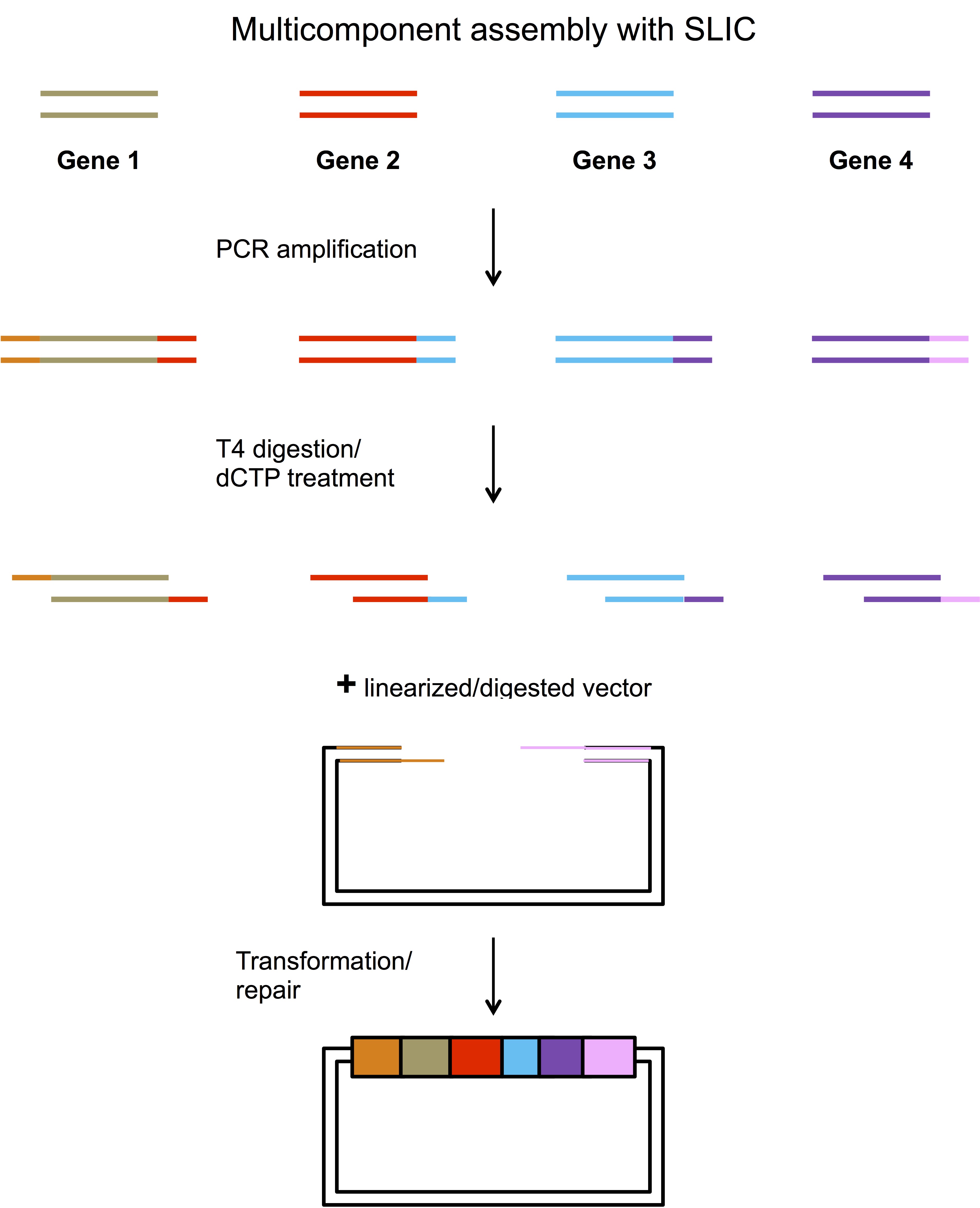 How does SLIC compare to other cloning methods?

SLIC’s limitations arise from its dependence on single-stranded overhangs. These overhangs must be accessible to allow for complementary base pairing, so SLIC can’t be used if the overhangs would have stable ssDNA secondary structure. One common example is the stem-loop structure of transcriptional terminators. Another potential issue is sequence similarity. If fragments in a multicomponent assembly have 5’ or 3’ sequence homology to each other, they may be assembled incorrectly. To overcome this limitation, one option is to perform a hierarchical assembly, assembling fragments in multiple steps to avoid using multiple fragments that share homology in the same reaction. In these cases, the use of another cloning method, such as Golden Gate assembly, may also be beneficial.

SLIC is a standardized method for multi-fragment DNA assembly, and its low cost makes it ideal for researchers doing large amounts of cloning. Assembly is scarless, unlike Gateway cloning, and the method’s flexibility allows it to be used with different types of PCR-generated inserts. By harnessing the power of DNA repair in E. coli, you can assemble multiple fragments without the need for specific restriction sites or DNA ligase!