Fluorescent imaging techniques have become indispensable tools for molecular and cell biologists over the last two decades, but their use can be limited by a few caveats. Since fluorescent proteins (FP) require external light activation, you can’t use fluorescence to monitor processes directly affected by light. Long-term light exposure can also lead to cellular phototoxicity, and experimental success can be affected by both autofluorescence and photobleaching. Researchers have long been interested in using luminescence to get around these issues, but this solution wasn’t practical due to the low intensity of luminescent proteins. To make luminescent imaging a reality, Addgene depositor Takeharu Nagai and colleagues at Osaka University have developed Nano-lantern technology. Nano-lanterns contain a Renilla luciferase variant fused to an FP; when supplied with a luciferase substrate, the luciferase transfers energy to the FP, resulting in a fluorescent signal. Since their first publication in 2012, the Nagai laboratory has assembled a collection of multicolored nano-lanterns for use in various applications, including optogenetics, biosensors, and fusion proteins.

Solving the problems of low luminescence 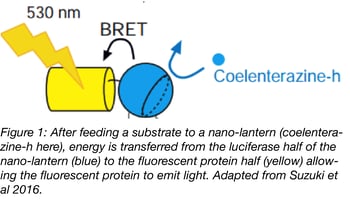 By itself, Renilla luciferase has a low quantum yield, and when transiently expressed in cells, generates much less signal than comparable fluorescent proteins. This weak emission hasn’t stopped some scientists from using chemiluminescent proteins for imaging, but it has precluded widespread adoption of the technology.

In 2012, Saito et al. described the first Nano-lantern, a fusion of a mutagenized Renilla luciferase (RLuc8) with Venus. This luminescent technology is based on the principle of bioluminescence resonance energy transfer (BRET). Photons emitted by a Renilla luciferase variant are used to excite the fused fluorescent protein. This technique is very similar to the widely used FRET, but it eliminates the need for an excitation light source. Instead, a luciferase substrate like coelenterazine is supplied in the culture medium to allow RLuc8 to produce photons.

The original nano-lantern emitted yellow-green light and exhibited 3-5 fold increased brightness over previous BRET probes, with sufficient signal for in vivo and in vitro imaging. Saito et al. used this Nano-lantern to image labeled tumors in freely moving mice injected intravenously with coelenterazine, with increased sensitivity and faster imaging compared to previous publications. They also developed calcium, cAMP, and ATP sensors based on Nano-lantern, showing the technique’s versatility and adaptability to many different contexts. 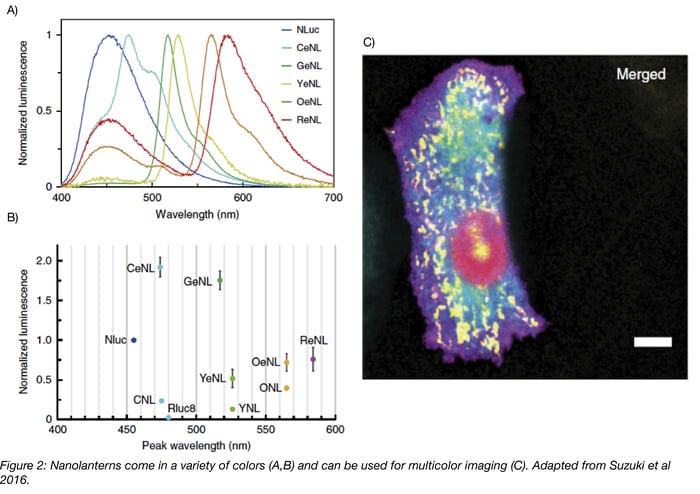 The latest enhanced Nano-lanterns (eNL) described in Suzuki et al. improve the brightness of previous Nano-lanterns by 2-4 fold and permit five-color fluorescent imaging! These eNL constructs use the brightest characterized luciferase, NanoLuc, and its substrate furimazine. In addition to the previously described applications, the enhanced signal of eNL allows their use for the first time in single molecule imaging.

The Nagai laboratory has a done a wonderful job characterizing Nano-lanterns and eNL for many different applications. For long-term imaging, especially where photobleaching and phototoxicity are a concern, these constructs come in very handy. This approach is especially suited to complement optogenetic tools, where light used for excitation can cause unintended activation of the optogenetic system. Biosensors based on Nano-lantern technology are also very robust, with an eNL-based calcium sensor displaying a 500% signal change upon calcium binding. Suzuki et al. also envision eNLs as good reporter genes for endogenous protein fusions created using CRISPR/Cas9. eNLs offer high luminescent signal for imaging of low-copy number proteins, whereas such detection is difficult using fluorescent imaging due to autofluorescence and a high signal-to-noise ratio.

Despite the many benefits of Nano-lantern technology, there are a few drawbacks associated with luminescent imaging: