A similar genetic code is used by most organisms on Earth, but different organisms have different preferences for the codons they use to encode specific amino acids. This is possible because there are 4 bases (A, T, C, and G) and 3 positions in each codon. There are therefore 64 possible codons but only 20 amino acids and 3 stop codons to encode leaving 41 codons unaccounted for. The result is redundancy; multiple codons encode single amino acids. Evolutionary constraints have molded which codons are used preferentially in which organisms - organisms have codon usage bias. 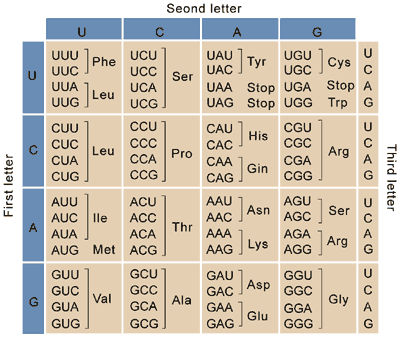 You can find many codon tables showing which codons encode which amino acids (see example to the right). With such simple rules, you might think it’s easy to come up with a workable DNA sequence to encode your peptide of interest and produce that peptide in your organism of choice. Unfortunately, codon preferences make it so you cannot choose among the possible codons at random and expect your sequence to express well in any organism.

So what are the evolutionary constraints that lead to these preferences and what can we do about them? Read on to find out!

Why do organisms have different codon usage biases?

The reasons for varied codon preferences among organisms aren’t completely understood, but some possible reasons include:

How does codon usage bias affect my experiments?

While codon preferences can be very useful for organisms, they can be problematic for researchers trying to express proteins in heterologous hosts. If you simply amplify a gene of interest from the human genome, for instance, it may not express at all in E. coli (you can find a variety of databases showing various organisms’ codon preferences online). Even if the gene is translated, it may not function properly. This is the result of a mismatch between human and E. coli codon preference. Some codons commonly used in humans are not at all common in E. coli and vice versa. When translating these codons, the ribosome may therefore stall at inappropriate locations or fail to make it through the entire transcript resulting in the production of nonfunctional proteins and protein fragments respectively.

With low cost DNA synthesis, one of the primary ways researchers solve the problem of codon choice is to resynthesize genes in such a way that their codons are more appropriate for the desired expression host. This is known as “codon optimization.” Though simple in theory, this is not as easy as it sounds. Even for relatively short peptides, there can be many possible ways to encode them and what constitutes the “appropriate” codon is not necessarily obvious.

You might think, “Nonsense! I should just choose the codon with the most abundant pool of charged tRNAs in my host organism for every amino acid I’d like to encode,” but, as described above, not every region of a protein should necessarily be translated rapidly to produce a protein that functions properly.

You might then think, “Okay, I’ll just make sure the abundances of the codons I choose for the host match the abundances of codons used in the native organism.” This is possibly a better idea and has been used successfully in the past (Angov et al., 2008), but there are still many more features to consider when designing a full gene. A non-exhaustive list includes:

As you might imagine, it’s not easy for humans to balance all of these factors on their own. Luckily, many researchers have created codon optimization algorithms and DNA synthesis companies such as IDT and GenScript host online codon optimization tools. Keep in mind that, just because you optimize a gene with one of these tools, it doesn’t necessarily mean the gene is going to express well. If you do get good expression, you should also functionally analyze the protein produced to ensure that it has folded properly.

You may be able to avoid getting your genes of interest codon optimized by ordering plasmids containing them from Addgene. If a plasmid at Addgene contains a gene that’s been codon optimized for a particular organism, this will sometimes (but not always) be noted in in the “mutation” field on the plasmid page (see plasmid 87904 for example). As many plasmids available from Addgene now have full sequence data, we recommend directly analyzing gene sequences for codon optimization and suitability for your expression host before using them in your experiments.

If you don’t have the time or the funds to synthesize a codon optimized version of your gene of interest, it’s possible to overexpress low abundance tRNAs in your expression host and thereby increase their abundance. For example, the commercial Rosetta E. coli strains express a variety of tRNAs that are normally found at low abundance in E. coli.

The advantage of producing additional tRNAs is that you can use the same expression system for many different genes without having to create new constructs. However, due to problems such as mismatched translation rates and potential effects on cell growth, even hosts producing alternative tRNAs may not express sufficient amounts of your protein of interest.

Regardless of which method you choose to overcome the problems surrounding codon choice, you should have some method to make sure the proteins you produce function properly. Overexpression can result in the production of insoluble, nonfunctional globs of protein known as inclusion bodies that will generally segregate with the cell pellet during purification procedures. Even if you produce a large amount of protein in your expression host of choice, you should perform a functional assay to make sure your protein isn’t forming inclusion bodies and is folding properly.