Learn about in vivo biotinylation of bacterial fusion proteins

Biotin is an essential vitamin for life

Although biotin is most commonly known for its role in molecular biology, biotin (Vitamin H or Vitamin B7) is first an essential coenzyme that is required by all organisms for life. Biotin is only synthesized by plants, most bacteria and some fungi, thus mammals must obtain the vitamin through external sources. Humans absorb most of the biotin they need in the small intestine from the microflora that reside there.

Biotin is a cofactor that in its active form is covalently attached to the active site of key metabolic enzymes including biotin carboxylase and decarboxylases. These enzymes catalyze the transfer of carboxyl groups to organic acids to produce important cellular metabolites. Biotin acts as a carboxyl carrier from one compound to the other. These biotin dependent enzymes are essential for processes such as gluconeogenesis, lipogenesis, amino acid metabolism and energy transduction.

Biotinylation is the general process by which biotin is added to a protein or macromolecule. Biotin can be added enzymatically or chemically. Enzymatic biotinylation occurs naturally in cells and is the process by which biotin is covalently bonded to a specific lysine at the active site of a newly synthesized enzyme. Biotin protein ligase (BPL) is responsible for this highly specific post-translational protein modification. Most organisms have less than five enzymes in the entire proteome that are biotinylated. In E.coli for example, the BPL, BirA, is responsible for biotinylating only one lysine in the entire organism on the biotin carboxyl carrier protein (BCCP).

Discovery of the biotin-avidin interaction 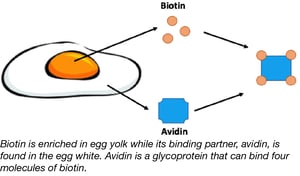 In the late 1930s it was observed that animals fed a diet of primarily egg whites would develop skin lesions and other terrible health issues. This disease was termed “egg white injury” and was determined to be due to a deficiency in Vitamin H later renamed Vitamin B7/biotin. Egg white injury would plague these animals even if their diet was being supplemented with biotin. Thus something in the egg white was sequestering biotin from being absorbed. In 1940 Esmond E. Snell was able to purify the protein responsible for binding biotin, avidin. Avidin was aptly named for the chicken,“Avian”, egg it was purified from. Snell later confirmed that avidin was indeed the culprit in egg white injury by feeding rats purified avidin (Kresege et al., 2004). Avidin is a glycoprotein that consists of four identical subunits that can each bind one molecule of biotin.

Biotin and avidin have an extremely strong affinity for one another. Actually the bond between them is one of the strongest noncovalent protein-ligand interactions found in nature. Once the bond is formed it is unaffected by changes in pH, temperature or organic solvents.

Uses of biotin in molecular biology

Biotin is a relatively small, water soluble molecule that does not interfere with the macromolecules it is added to. Biotin also has an exposed side chain that can be easily manipulated to make reactive species without affecting the avidin binding site. With all of these features it isn’t surprising that scientists began to exploit biotin and its strong interaction with avidin for molecular biology and biotechnology purposes.

Once a polypeptide is biotinylated (more on this below) it can be incubated or co-expressed with avidin or a structurally similar protein that was discovered in the 1960s, strepavidin. The Biotin-avidin complex can then be used and/or manipulated for a scientist’s intended purpose. Two of the most common uses of biotinylation in the lab are protein purification and immunoprecipitation experiments. Biotinylated proteins or complexes can be easily purified using columns or beads that are coated with avidin.

The biotin-avidin interaction has also been adapted for use in immunohistochemistry and antibody labelling. In these experiments, biotin is added to a primary or secondary antibody that targets your protein of interest or primary antibody respectively. Avidin bound to a reporter is then added to the reaction for easy detection. The multiple biotin binding sites found on avidin are also ideal for signal amplification during these experiments. During detection, a biotinylated reporter enzyme that is pre-incubated with free avidin can be added to your sample. Any free biotin-binding sites on this complex can bind to your biotinylated antibody. This creates a large meshwork of biotin-avidin complexes bound to your protein of interest leading to amplification of the reporter signal and easier detection. This strategy is referred to as the Avidin-Biotin Complex (ABC) immunohistochemistry (IHC). For more information on ABC and IHC check out Thermo Fisher Scientific's guide.

There are an array of other molecular biology applications for biotin and avidin. A short list of some other common applications and links to relevant papers and webpages are listed below.

Methods for biotinylating your macromolecule of interest

Proteins can also be biotinylated by exploiting the specificity of the E.coli BPL, BirA. If you recall, BirA biotinylates only one lysine in the entire E.coli proteome. Using this knowledge, scientists identified the 13 amino acid sequence required for BirA recognition and biotinylation. This 13 amino acid sequence is termed AviTag. Using AviTag, one can label a protein of interest with biotin by simply creating a fusion in which AviTag is added to either the N or C terminus of the protein. BirA has been shown to effectively biotinylate AviTag expressing proteins in bacteria, yeast, insect and mammalian cells. Check out Kay et al., 2009 for methods on biotinylating proteins with BirA.

You can find plasmids that contain both AviTag and BirA at Addgene!

Biotin can be added to either terminus of a DNA sequence during a Polymerase Chain Reaction (PCR) by using a biotinylated primer. Biotin can also be enzymatically incorporated during PCR using a biotin labelled dUTP. There are multiple types of biotin labels that can be added to an oligonucleotide depending on your downstream application. Biotin labelled oligonucleotides can be used in a multitude of applications including but not limited to in situ hybridization, blotting (Northern and Southern) and affinity binding.

Photobiotin can be used to non-selectively label DNA and RNA. Photobiotin acetate consists of a biotin molecule attached to a photoreactive arylazide group. Under strong visible light, the arylazide group becomes reactive and forms a link with nearby nucleic acids (McInnes et al., 1990).  Photobiotinylation is sometimes easier and less expensive than other enzymatic methods. Scientists have commonly used this method to attach proteins or polypeptides to a solid substrate (Holden and Cremer, 2003).