Plasmids can be amazing and simple tools for studying gene regulation. They are used to study how transcription factors and other trans-regulatory elements (TREs) and some cis-regulatory elements (CREs), like promoters, influence gene expression. However, scientists frequently return to native chromosomes because chromatin context matters. The impact of TREs and CREs on gene expression is commonly investigated via Chromatin Immunoprecipitation (ChIP) and chromatin capture techniques, respectively, but these two separate methods are not without their own technical challenges. Enter the Xu Lab's CAPTURE, a method for identifying TREs and CREs that partners CRISPR’s targeting abilities with the strength of the biotin-streptavidin interaction. CAPTURE is capable of identifying old and new TREs and CREs, CRE-CRE interactions, and has even provided enough data for Liu et al to re-draw the beta-globin locus regulation model. Read on to learn more about this captivating tool!

CAPTURE stands for CRISPR affinity purification in situ of regulatory elements. CAPTURE uses a biotin-tagged dCas9 to isolate (affinity purify) CREs and TREs (regulatory elements) interacting in their native chromatin context (in situ). CAPTURE has 3 key components: 1) dCas9 with an added biotin acceptor site, 2) BirA, a biotin ligase, which when expressed in cells, adds a biotin to this acceptor site, and 3) gRNA(s) to target biotinylated dCas9 to a site or sites of interest in the genome. After targeting dCas9, formaldehyde cross-linking is used to fix protein and DNA interactions. At this point, the protocol diverges depending on the aim of the experiment.

If identifying TREs is the goal, chromatin is broken into small pieces via shearing, pieces associated with dCas9 are pulled out via a biotin-streptavidin IP, and associated proteins are analyzed via mass-spec. This version of the method is called CAPTURE-Proteomics. This method can answer similar questions to ChIP but, rather than using a TRE as bait for isolating associated DNA sequences, DNA is used as bait for isolating associated TREs. CAPTURE also doesn’t require prior knowledge of which TREs are involved in gene regulation and it doesn’t require the existence of a ChIP-quality antibody against the TRE of interest. In terms of techniques, CAPTURE is most like another ChIP method that used a Protein A (PrA)-tagged dCas9 and an antibody-based purification, except CAPTURE uses a biotin tag for purification. The affinity between biotin and streptavidin is much higher than antibody-antigen interactions, which not only increases the sensitivity of detecting TREs, but also increases the specificity because non-specifically bound proteins are removed via stringent washing.

If identifying CREs is the goal, DNA is digested with the DpnII restriction enzyme, and ends are ligated together to create loops of DNA. The digestion and ligation steps of this process can connect pieces of DNA that are far away in genomic distance (bp), but close together in terms of their physical location in the nucleus (i.e. promoter-enhancer interactions).These loops of DNA are then broken into smaller pieces via shearing, and pieces that are connected to dCas9 are pulled out via a biotin-streptavidin IP. These pieces are then paired-end sequenced. This version of the method is called CAPTURE-3C-Seq.  It’s similar to other chromatin capture methods (3C, 4C, 5C, Hi-C), but doesn’t require any pre-selection PCR amplification of DNA sequences and has higher resolution. ChIA-PET is another method for studying chromatin conformation, but it depends on an antibody-based IP of DNA associated with a protein of interest, limiting its use to the study of individual genomic loci.

Another advantage of CAPTURE-3C-Seq is it’s multiplexable when multiple gRNAs are expressed at once. This is possible because the DNA sequence of interest (i.e. the one dCas9 is targeted to) is physically linked to its CREs during the digest and ligation steps of sample processing. It’s important to point out that CAPTURE-Proteomics is not multiplexable because the link between TREs’ and a DNA sequence of interest is lost because formaldehyde crosslinks must broken for proteins to be analyzed via mass spec.

The (loopy) beta-globin locus: A model for studying chromatin conformation

To demonstrate applications of CAPTURE, Liu et al primarily focus on the beta globin gene locus. The 𝛃 globin locus is well studied and many of its CREs and TREs are known. The locus is made up of 5 globin genes (ε [epsilon], GƔ [G gamma], AƔ [A gamma], 𝛅 [delta], 𝛃 [beta]) which are regulated in part by a common enhancer cluster, or locus control region (LCR). The LCR is comprised of five open chromatin sites or hypersensitivity sites (HS1-HS5), as determined by DNaseI hypersensitivity. These genes are expressed starting from the left to the right in a developmental stage-specific manner in red blood cells and the LCR is required for high levels of globin gene expression. The LCR is several kb upstream of the globin genes, but comes in close proximity to globin genes for regulation through chromatin looping.

The real power of CAPTURE is the ability to integrate TRE location with the 3D organization of CREs, however the data can be kind of intimidating to look at (see figure 5 B and D in Liu et al). It can be useful to think of the data as a map of a particular locus, with CREs being like particular cities on the map and TREs being like the residents of those cities. By determining which cities residents are near and also which cities are near each other, it’s possible to back calculate what the map looks like. Liu et al used this type of mapping to improve upon the beta globin locus map.

Since CAPTURE is entirely dependent on the specificity of the gRNAs used, Liu et al first tested the ability of individual gRNAs targeting various sites in the globin locus (HS1-5, 3’ HS1, gamma-globin and beta-globin) to pull down their intended genomic sites. This experiment resulted in strong enrichment of targeted DNA sequences, with no significant off-target DNA sites isolated. Multiplex expression of gRNAs had similar results, suggesting that targeting dCas9 to many different genomic sites in one experiment was possible.

To verify CAPTURE-Proteomics, Liu et al first determined which non-specific proteins would be detected from cells expressing some but not all components of the CAPTURE system (i.e. BirA only, BirA + dCas9 + control gRNA, etc). Using quantitative proteomics, the relative abundance of these non-specific proteins was calculated and used to set an enrichment threshold.

Of proteins with an enrichment above this threshold, many known beta-globin locus regulators were identified, such as red blood cell transcription factor GATA1 (see figure 3D in Liu et al). New TREs were also identified: nuclear pore complex proteins called nucleoporins, as well as BRD4, a protein that binds acetylated histones and is associated with gene activation.

To verify the role of these new candidate TREs, Liu et al took two different approaches in human erythroid cells: 1) RNAi-mediated knockdown of nucleoporin proteins (figure 4B in Liu et al), and 2) small-molecule inhibition of BRD4 (supplemental figure 3C-F in Liu et al). Both sets of experiments resulted in significant changes in expression of beta-globin genes, confirming the role of these proteins in the regulation of the locus. Looking at which proteins shared common CREs also hinted at what the beta-globin locus map might look like (figure 3E in Liu et al).

Next, to create a better picture of the 3D organization of the beta-globin locus, Liu et al used CAPTURE-3C-Seq to detect long-range DNA interactions with the locus. Thresholds were set so that random DNA-DNA interactions were excluded from analysis. Interactions tended to follow one of two patterns, which are best illustrated by the following genes: the actively expressed gamma-globin and the repressed beta-globin. gamma-globin was like a bustling hub, having many interactions with other active genes, like epsilon-globin, as well as most of the other beta-globin locus CREs (HS3, 3’HS1, see figure 5D in Liu et al). The beta-globin gene was like the boondocks, interacting mostly with the gene and CRE closest to it: delta-globin and 3’HS1. CAPTURE-3C-Seq also identified new CREs potentially involved in globin gene regulation. Knock out of these CREs with CRISPR-Cas9 caused significant changes in beta-globin genes expression (figure 5F in Liu et al), verifying their role in regulation of the locus.

Another use for CAPTURE-3C-Seq is investigating disease-associated CREs. Liu et al demonstrate this by detecting long range DNA interactions with a potential CRE located in an intergenic region of DNA between A gamma- and delta-globin. Deletion of this stretch of DNA is associated with persistent expression of gamma-globins. Out of three spots targeted with gRNAs in this 3.5 kb region, one interacted with most of CREs in the beta-globin LCR. Deletion of the whole 3.5 kb region resulted in upregulation of fetal-type hemoglobin (gamma-globins) as seen in patients, and caused changes in interactions between the CREs, suggesting that this piece of ‘junk’ DNA plays a role in proper chromatin organization and control of Beta-globin gene expression. CAPTURE-3C-Seq is also useful for studying the chromatin organizational changes that underlie developmental changes, such as differentiation of embryonic stem cell (figure 7 in Liu et al). 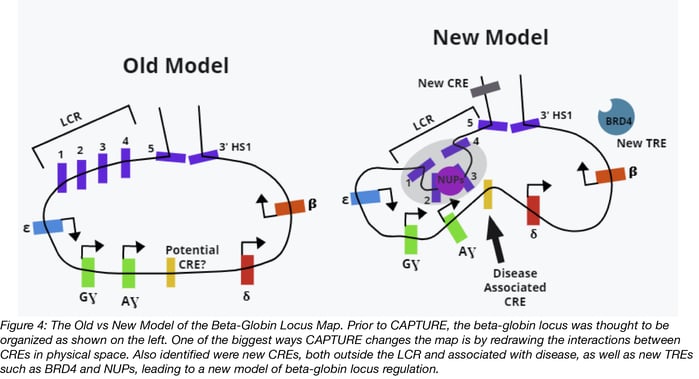 TL;DR CAPTURE is a Cas9-based tool for studying TREs’ and CREs’ roles in gene regulation by 1) determining which CREs and TREs interact, and 2) figuring out which CREs interact with each other.

Ready to start CAPTURE-ing some CREs and/or TREs? The plasmids from this paper are available from Addgene. Let us know about your experiences using CAPTURE in the comments below!

For more information on chromatin conformation methods, check out this guide from Abcam