The complexity of biological systems can hinder our attempts to study and engineer them, but what if we had a simple tool that allowed us to rapidly decode the complexity? The CombiGEM-CRISPR technology was developed with the goal of providing an easy-to-use tool to analyze the complex combinatorial genetic networks underlying your favorite biological phenotype in a scalable way. This blog post will introduce you to this new technology, and guide you through the basics of CombiGEM-CRISPR experiments.

CRISPR has revolutionized how we decode the genome by making it easy to create specific genetic perturbations. The ease with which one can design and synthesize CRISPR guide RNAs (gRNAs) for genome editing in large-scale has led to the rapid generation of genome-wide gRNA libraries that knock out (Doench et al., 2016; Hart et al., 2015; Koike-Yusa et al., 2014; Ma et al., 2015; Shalem et al., 2014; Wang et al., 2014), knock down (Gilbert et al., 2014), and activate (Gilbert et al., 2014; Konermann et al., 2014) individual genes for studies interrogating their functions. The continual advancements in gRNA design necessary to achieve maximal on-target and minimal off-target activities have proven themselves incredibly useful for the efficient generation of individual (and multiple) genetic perturbations in single cells. Methods to scale up multiplexed CRISPR systems for high-throughput screening are vastly useful for mapping the combinatorial genetics that underlie complex regulation in biological systems.

The CombiGEM platform provides a means to create barcoded gRNA libraries that can be used to combinatorially modify the genome, screen for a particular phenotype, and quickly profile the resultant hits (Cheng et al., 2014; Wong et al., 2015; Wong et al., 2016). CombiGEM uses iterative one-pot reactions with straightforward restriction digestion and ligation steps to build barcoded lentiviral plasmids containing one or more gRNAs. As each ligation reaction uses a pool of gRNAs as starting material, the ligation products are a diverse pool of lentiviral plasmids. Multiple rounds of digestion and ligation result in plasmid libraries containing combinations of different gRNAs in each plasmid. Each gRNA combination can be tracked and quantitatively analyzed by sequencing its set of barcodes. CombiGEM is highly flexible and can accommodate any genetic elements of interest. It can thus be tailored to address the users’ specific research questions. CombiGEM has been successfully applied to functionally characterize combinatorial gene knockouts generated via multiplexed gRNA expression (Wong et al., 2016), in addition to the combinatorial expression of other genetic elements including transcription factors (Cheng et al., 2014) and microRNAs (Wong et al., 2015).

The first thing you will need is to get the list of effective gRNA sequences targeting your genes of interest. Thanks to the tremendous efforts made by various research teams to build and constantly improve gRNA libraries, excellent resources with effective gRNAs are publicly available, including those found at Addgene! 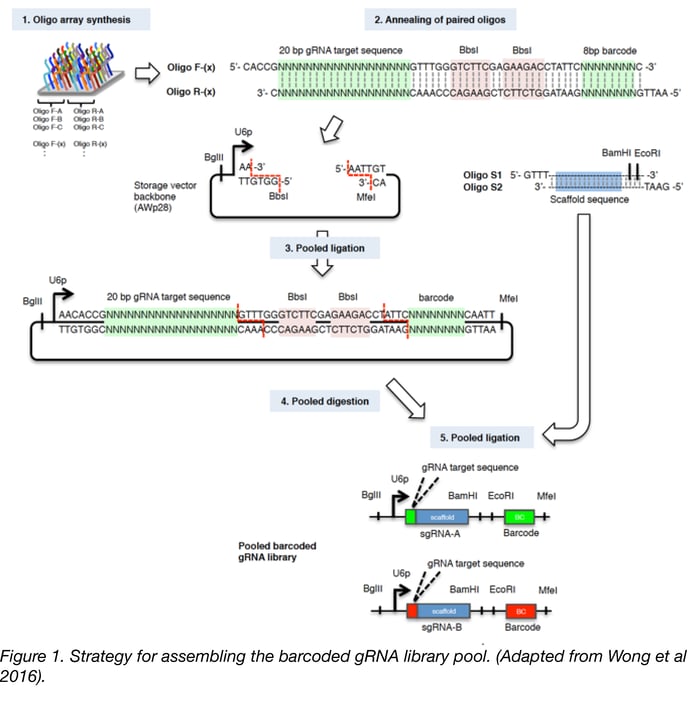 With a list of gRNA targeting sequences, you can then readily generate your barcoded gRNA library sequences via oligo synthesis using the format indicated below and pool-clone them into the pAWp28 storage vector (Figure 1): 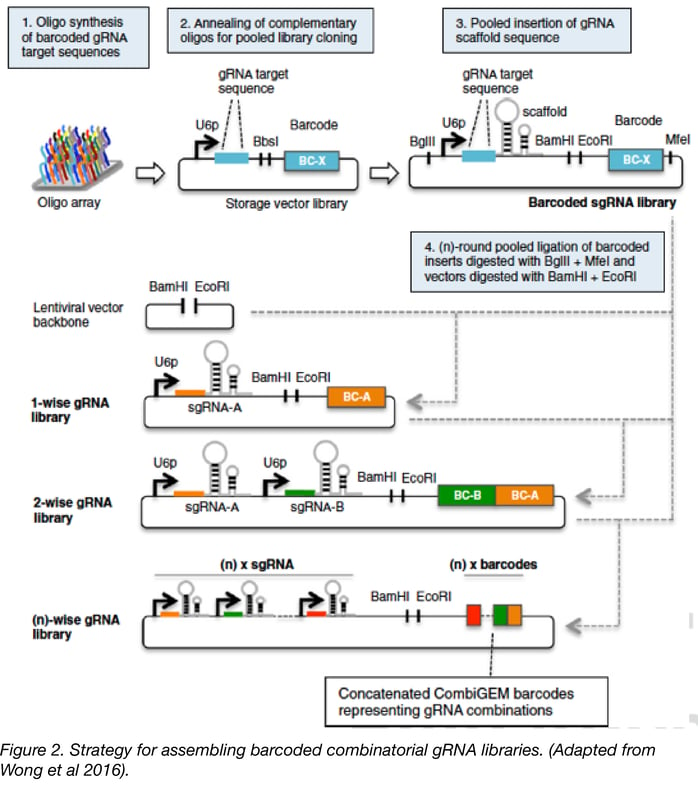 With CombiGEM and CRISPR platforms now being integrated, we look forward to the realization of a variety of perturbations and applications in functional genomics, cell reprogramming, and beyond. For further details, please check out Wong et al 2016 and Wong et al 2015.

Alan Wong is currently an Assistant Professor at the School of Biomedical Sciences of the University of Hong Kong. He is particularly interested in developing and applying new technologies to interrogate and understand complex biological systems. He can be contacted at aslw@hku.hk.