CRISPR-Cas9 (Cas9) is an RNA-guided nuclease that targets and cuts genomic DNA. The interplay between Cas9 (which causes the breaks) and host cell DNA repair factors (which repair those breaks) makes Cas9 extremely effective as a genome editing reagent. This interplay falls into two broad categories and thus, causes two types of editing outcomes: Cas9 breaks repaired by the non-homologous end-joining (NHEJ) pathway disrupt target gene sequences (thus inactivating genes), while breaks repaired by homology directed repair (HDR) pathways can modify the sequence of a gene (thus altering its function). HDR is crucial for certain applications, for example, correcting the allele that causes sickle cell anemia. However, HDR occurs much less frequently than NHEJ and the efficiency of these editing reactions is low. Understanding the biological cause of this repair bias is a fascinating (and yet unanswered) question. Our recent paper (Richardson et al 2016) revealed some of the biophysical parameters that can influence the HDR/NHEJ decision.

Our conclusions reinforce a key scientific principle: that understanding a biological process in detail often suggests new strategies to manipulate that process. We began our research with a simple question: how do Cas9 and sgRNA interact with and dissociate from a DNA target? The surprising answer to this question led us to develop a new, rational approach to improve the efficiency of sequence replacement by HDR.

We first measured Cas9 dissociation rates and discovered that the catalytically active form of the nuclease dissociates very slowly after introducing a cut, with residence times on DNA of approximately 6 hours. To our surprise, we measured identical dissociation rates for catalytically inactive dCas9 molecules. We followed these experiments with more detailed investigations into the release of DNA post-cut. Using substrate DNA labeled on both sides of the break, we determined that Cas9 held tightly to three of the four strands of the cleaved duplex, while the fourth strand (the released strand in Figure 1 below) was free to anneal to complementary ssDNA molecules in vitro. 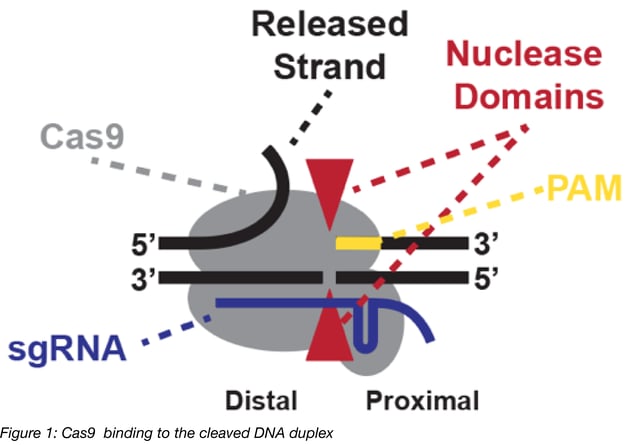 We next wondered if we could leverage this model (built from in vitro studies) to boost the efficiency of sequence replacement in vivo. We discovered that single stranded donor DNA: 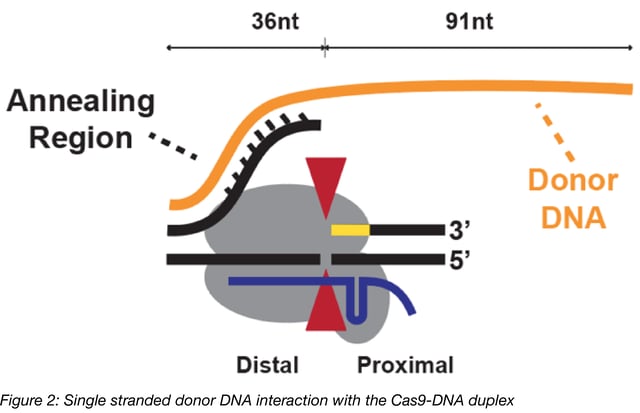 Our in vitro results also demonstrated that catalytically inactive dCas9 produced a “bubble” structure in uncut target DNA that was accessible to anneal with complementary single stranded DNA. We thus wondered if such a structure could drive sequence replacement in cells. Targeting three dCas9 molecules to a precisely spaced region allowed sequence replacement rates of approximately 1%. This is by no means a large number, but it was attained without any of the error-prone repair that normally accompanies Cas9 cutting. We still don’t know the mechanism underlying dCas9 editing, but it could be very useful to tackle genetic diseases in which sequence replacement holds some kind of fitness advantage but error-prone repair of the gene would be disastrous (i.e. if breaking the gene is worse than leaving the mutation alone).

The in vivo editing experiments in this publication were performed using a technique called nucleofection, which introduces functional Cas9 protein and the targeting guide RNA into cells by electroporation. Results from our lab and others (Lin et al 2014, Richardson et al 2016, and Kim et al 2014) have shown that this technique supports extremely high frequencies of genome cutting and, when donor DNA is included in the nucleofection reaction, extremely high frequencies of HDR. The detailed protocol for nucleofection as well as the sequences of our validated editing reagents can be found on our plasmid pages. We encourage any labs performing genome editing experiments to try nucleofection as (in our hands) this technique supports gene disruption or gene replacement frequencies that are an order of magnitude greater than transfection approaches. Moreover, the cost of reagents is relatively modest, requiring expressed Cas9 protein, transcribed sgRNA, and optional donor DNA.

Additonal Corn Lab Members who worked on this publication: