This post was contributed by Patrick Miller-Rhodes, a Ruth L. Kirschstein NRSA Predoctoral Fellow at University of Rochester Medical Center.

During development, complex genetic programs specify and assemble diverse arrays of neurons, forming the neuronal circuits that will later be refined through experience. However, studying the genetic underpinnings of these processes has been complicated by the lack of precise genetic tools for modulating gene expression in the central nervous system (CNS). To address this technological gap, a trio of recent papers describe the development of CRISPR activation (CRISPRa) tools for neuroscience, including transgenic mice, neuron-optimized viral vectors, and high-throughput screening approaches. Here, we’ll highlight these recent advancements and offer commentary on their application to neuroscience research.

What is CRISPR-based activation?

To summarize, CRISPRa uses a nuclease-dead variant of Cas9 (dCas9) and engineered combinations of transcriptional activators to induce gene transcription at genomic sites targeted by specific sgRNAs. Its RNA-guided nature makes CRISPRa much simpler to implement in genome-wide screens over cDNA libraries. However, using CRISPRa to target individual genes can be relatively laborious because multiple plasmids/viruses are needed to deliver all the protein and RNA components, and several sgRNAs must be screened to identify effective ones.

CRISPRa has largely been limited to in vitro settings due to the large size of Cas9 activators, which largely precludes delivery by adeno-associated vectors (AAV). This issue was recently circumvented by the Yang Lab with the development of a Suntag-p65-HSF1 (SPH) transgenic mouse (Zhou et al., 2018). This mouse expresses a modified version of the “Suntag” Cas9 activator that recruits up to twenty copies of the p65-HSF1 transcriptional activator to each genome-bound dCas9 (see Figure 1a for the transgenic construct). More importantly, the expression of this construct is Cre-dependent, enabling spatiotemporal control over its expression. Constitutive or inducible Cre recombinases can be introduced by AAV or by mating with Cre-expressing mice. 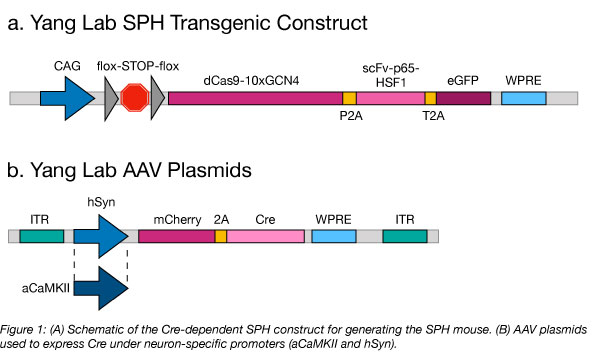 Before using gRNAs in vivo, they should be screened for activity in vitro and then packaged into AAV for in vivo delivery. Multiplex gene targeting is also possible and is only constrained by AAV packaging limits (i.e., how many sgRNA expression cassettes will fit).

Cre-dependent expression of the SPH activator paired with AAV sgRNA delivery make the SPH mouse an attractive tool to probe gene-function relationships in defined substructures of the CNS as well as individual neuronal populations.

Alternatively, Cas9 activators can be delivered to the CNS by lentivirus, which has a larger packaging capacity than AAV. Such an approach was described recently by the Day Lab, who developed neuron-optimized lentiviral vectors for in vitro and in vivo CRISPRa (Savell et al., 2019). This dual lentivirus system pairs ubiquitous expression of sgRNA(s) and mCherry (vector 1) with neuron-specific expression of dCas9-VPR (Figure 2), a popular Cas9 activator developed by the Church Lab. Neuron-specific expression is mediated by the synapsin 1 (SYN) promoter, which was superior in its ability to induce CRISPRa in primary rat neurons over other promoters, including ubiquitous ones such as EF-1α and CAG. 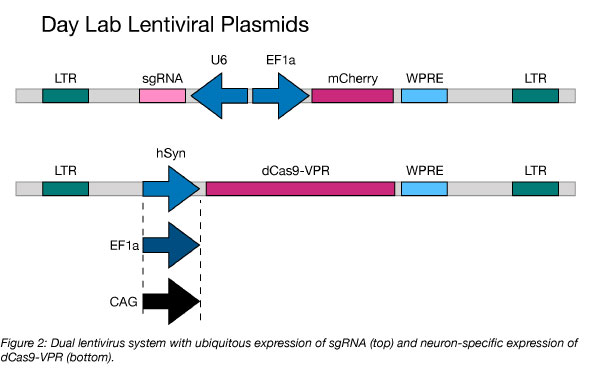 The Day Lab used their optimized vectors to highlight a key advantage of CRISPRa over traditional cDNA overexpression: isoform-specific gene expression. Gene isoforms refer to mRNAs generated from the same gene but with different untranslated or coding regions. Typically, each gene isoform has a distinct transcriptional start site. Because CRISPRa can be targeted anywhere in the genome, it is relatively straightforward to use CRISPRa to selectively target these different transcriptional start sites in order to better understand isoform-specific gene regulation — at least, more straightforward than generating cDNA for each gene isoform individually.

To highlight this advantage, they selected the immediate-early gene Bdnf, which encodes brain-derived neurotrophic factor (BDNF). Bdnf is expressed early in response to neuronal activity (hence, “immediate-early”) and consequently regulates neuronal physiology by promoting the development of neurons and synapses as well as long-term memory formation. The Bdnf gene possesses 9 distinct transcriptional start sites, all of which yield the same BDNF protein. To demonstrate the specificity that can be achieved with CRISPRa, the Day lab singled out two Bdnf isoforms (I and IV) for investigation. Co-transduction of primary rat neurons with dCas9-VPR and sgRNAs targeting either transcript variant led to robust and specific upregulation of the targeted variants without inducing expression of the non-targeted variant.

Moreover, isoform-specific expression of Bdnf resulted in hundreds of differentially expressed genes between Bdnf I-overexpressing neurons and Bdnf IV-overexpressing neurons. Among the upregulated genes common between the Bdnf I and Bdnf IV overexpression variants were other immediate-early genes associated with neuronal activity, such as Fos, Egr3, and Arc. Thus, CRISPRa represents a powerful method to dissect the individual and shared contributions of transcript isoforms to neuronal physiology.

The Day Lab’s neuron-optimized lentiviral vectors can be found here.

Although the tools described above make CRISPRa more accessible to neuroscientists, not all neuroscience applications require such optimized tools. This is elegantly demonstrated by the Qi Lab, which developed a subgenome-scale CRISPRa screening approach in embryonic stem (ES) cells to determine which transcription factors promote neuronal differentiation (Liu et al., 2018). The pooled nature of this experiment requires fluorescence activated cell sorting (FACS) to isolate differentiated from undifferentiated cells at the end of the screening process. However, while the neuronal marker TUJ1 is useful for visualizing neuronal differentiation by immunohistochemistry, it is not amenable to FACS.  Thus, the researchers inserted human CD8, a gene that encodes a surface protein for which there are good flow cytometric antibodies, downstream of the TUJ1 coding sequence. ES cells that stably express the dCas9-Suntag activator were transduced with a pooled sgRNA library and were subsequently cultured for nearly two weeks to allow differentiation to occur. CD8+ cells were then isolated and their genomic DNA sequenced. Guide RNAs targeting several known and some unknown regulators of neuronal differentiation were enriched in the CD8+ population, as expected.

Although this strategy was employed to study neuronal differentiation, it could also be applied to the differentiation of other CNS cell types, including microglia, astrocytes, and oligodendrocytes, provided that reporter genes specific to these cell types are used. The lack of good flow cytometric antibodies for many CNS-resident cell types (microglia are a notable exception) necessitates such molecular gymnastics for sensitive applications such as CRISPR screening.

The plasmids used by the Qi Lab for this particular application can be found here.

Although cDNA overexpression approaches may still be preferable for individual gene activation in select in vitro and in vivo applications, the tools described above make CRISPRa in the brain relatively easy and accessible. There are also other applications for which CRISPRa is well-suited, including studying mRNA dosing effects, cellular reprogramming, and disease modeling. Further, the paucity of Cre-dependent mouse lines for overexpressing genes within discrete cell populations makes Cre-dependent SPH mice an attractive alternative.

Whatever your application, first ask yourself whether gene overexpression is necessary (instead of gene knockout or knockdown, for which there are often many more genetic strategies) and then consider whether traditional cDNA overexpression is suited to your experimental goals. If not, give CRISPRa a go!

Many thanks to our guest blogger Patrick Miller-Rhodes from the University of Rochester Medical Center.

Patrick Miller-Rhodes is currently a Ruth L. Kirschstein NRSA Predoctoral Fellow at University of Rochester Medical Center. He studies gene-function relationships in the CNS using CRISPRa as a member of the Gelbard Laboratory at URMC.