CRISPR pooled libraries have allowed scientists to easily perform genome-wide screens to effectively and efficiently investigate gene function. CRISPR libraries can be used to knock out, inhibit or activate target genes by combining specific sgRNAs with Cas9 or Cas9 derivatives.

Unmodified Cas9 causes double stranded DNA breaks that commonly result in a complete loss of function while nuclease-deactivated Cas9 (dCas9) can be tethered to a repressor (CRISPRi) or an activation domain (CRISPRa) to regulate gene expression. Some CRISPR libraries contain many sgRNAs per gene to increase confidence in the genetic screen. However, there are benefits to optimized libraries that utilize only a few sgRNAs per gene. These libraries provide more information while using less resources and are particularly useful when trying to screen a limited number of cells like primary cells or in vivo. 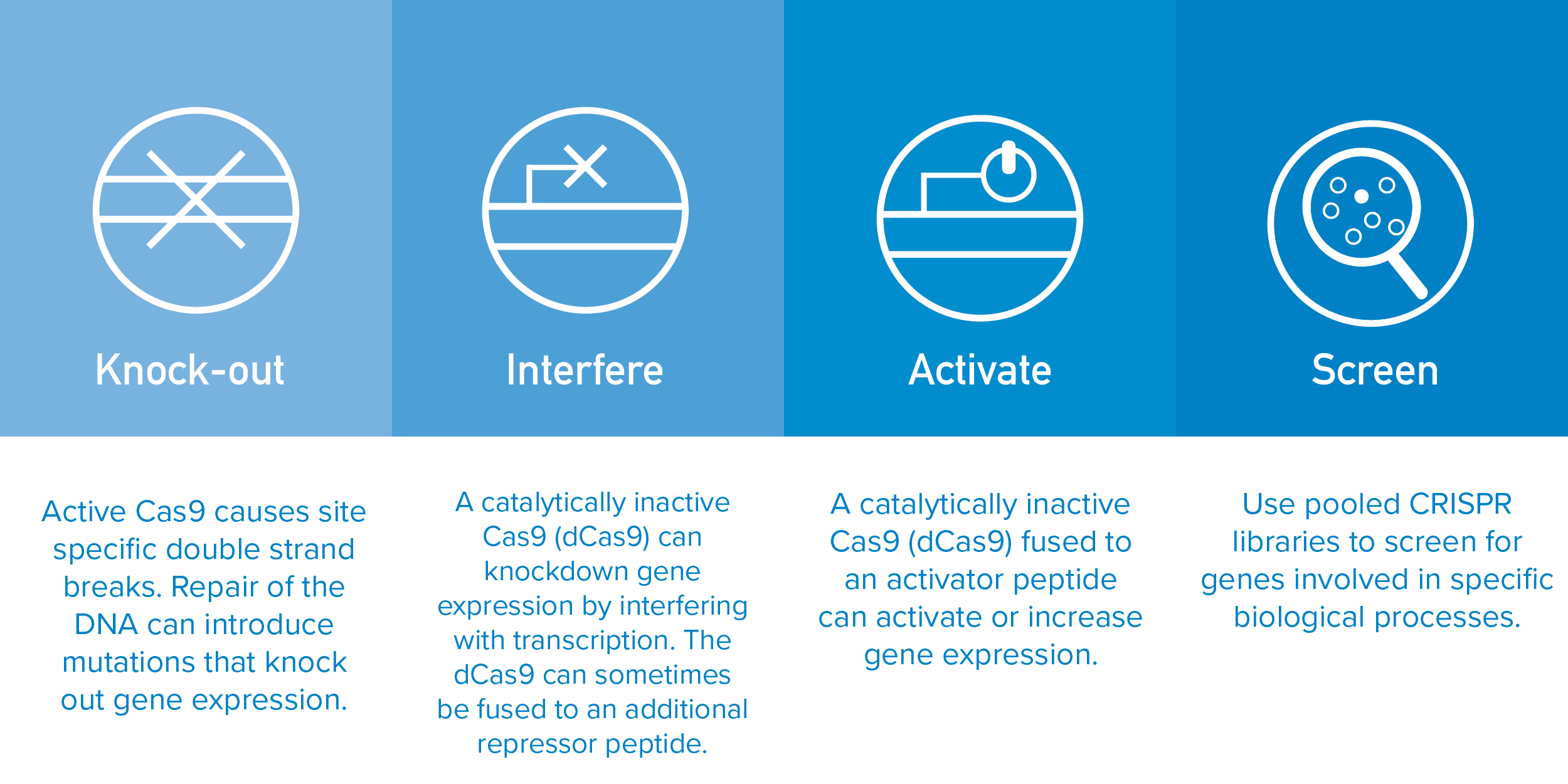 Recently, the labs of David Root and John Doench at the Broad Institute have developed human genome-wide CRISPRko (knock out), CRISPRi (interference), and CRISRPa (activation) libraries that do just that (Doench et al., 2016, Sanson et al., 2018). These libraries utilize optimized sgRNAs that were designed based on the rules identified in Doench et al., 2014 to predict sgRNA activity. In this study scientists examined approximately 1,900 sgRNAs and identified sequence features and adjustments that improved sgRNA activity and thus library performance. The Root and Doench lab’s optimized genome-wide CRISPRko, CRISPRi, and CRISPRa libraries have been shown to outperform other popular CRISPR libraries (see below).

Let’s take a look at the features and advantages of the optimized human CRISPR libraries.

The Brunello library consists of 77,441 sgRNAs with an average of 4 sgRNAs per gene and 1,000 non-coding control sgRNAs. This library was designed to improve on-target activity while reducing off-target effects in human genomes (Doench et al., 2016). To test the library, they conducted genome-wide negative selection screens with both A375 (melanoma) and AT29 (colon cancer) cells and assessed the libraries performance via the depletion of a gold standard set of genes (1,580 essential and 927 non-essential genes). The Root and Doench lab developed sgRNA-level metrics to assess library performance in viability screens. Based on these metrics the Brunello library was more effective than other popular CRISPR libraries in the depletion of essential genes. In the subsampling analysis of the sgRNAs, Brunello even with only a single sgRNA outperformed another CRISPR library with 6 sgRNAS, highlighting the benefit of sgRNA design in CRISPR libraries. Thus, the Brunello library proves that a few optimized sgRNAs is enough for efficient library performance, an important criterion for probing a limited number of cells.

Get the Brunello CRISPRko sgRNA library as pooled library or lentiviral prep!

While CRISPRko libraries are highly effective at identifying strong hits in genetic screens, they do have several limitations. CRISPRko results in a complete loss of function meaning that if an essential gene plays a role in the desired screening phenotype, it may be missed because it's essential for viability. In addition, high copy number genes may mimic viability genes as they are subject to an increase in dsDNA breaks that can cause cell death. Thus, CRISPR inhibition (CRISPRi) libraries provide an alternative way to screen for loss of function phenotypes while bypassing these issues.

CRISPRi libraries utilize an engineered Cas9, which contains multiple point mutations in the nuclease domain. These mutations result in an inactive RNA-guided DNA binding protein (dCas9). dCas9 is then tethered to a repressive domain, such as KRAB, to prevent efficient transcription from sgRNA targets. CRISPRi is effective in a narrow range around the transcription start site (TSS). The Root and Doench lab selected sgRNAs in this optimal window and ranked them based on their optimized sgRNA rules and potential off-target effects. The Dolcetto library contains two sets of sgRNAs; A, the top 3 ranked sgRNAs, and B, the next 3 ranked sgRNAs. Dolcetto was able to discriminate between non-essential and essential genes similarly to the Brunello knock-out library while mitigating toxicity induced by high copy number dsDNA cutting. A Dolcetto library containing only 3 sgRNAs (setA) also outperformed CRISPRi libraries with 10 sgRNAs in the sgRNA metrics, confirming again that sgRNA design plays a significant role in library efficiency.

In addition to inhibiting gene expression, dCas9 can also be used for transcriptional activation. Activation of specific genes allows scientists to conduct genome-wide gain of function screens. These screens can help reveal the function of lowly expressed genes or genes that are more drastically affected by gene activation rather than depletion. Multiple strategies have been developed to recruit transcriptional machinery to dCas9 and its RNA directed binding site. These methods include the fusion of an activation domain such as VP16 to dCas9 or the recruitment of multiple copies of VP16 termed the “Sun Tag” method (Tanenbaum et al., 2014). The sgRNA or tracrRNA sequences can also be modified to include RNA domains that recruit additional transcription factors.

The Root and Doench labs utilized tracrRNAs with two PP7 stem loops to recruit additional transcription factors to the targeted region (Sanson et al., 2018) . This tracrRNA was combined with the sgRNA expression vector allowing the screen to be conducted with only two constructs (the other containing dCas9-VP16). Like CRISPRi, CRISPRa is only effective when sgRNAs target a specific location on the gene. For CRISPRa, sgRNAs were targeted between 150-75 nucleotides upstream of the TSS. Similar to the Brunello and Dolcetto library, sgRNAs were selected and ranked based on the previously established sgRNA rules and  potential on- and off-target effects. The 6 best sgRNAs were selected per gene and divided into two sets, A and B. Sanson et al. demonstrated that the Calabrese library substantially identified more hits than the SAM library approach in a comparison study screening for vemurafenib resistance in A375 cells. The SAM system (CRISPR/Cas9 Synergistic Activation Mediator) uses an improved activator design that consists of inactive Cas9-VP64, a sgRNA with two MS2 RNA aptamers, and the  MS2-P65-HSF1 helper protein (Konermann et al., 2015).

Root and Doench also compared the Calabrese library to screens performed with open reading frame (ORF) overexpression libraries for resistance to MEK inhibition. Although both Calabrese and the ORF overexpression library identified several overlapping genes, most genes were unique to the individual libraries. These unique hits may have been false negatives in the other screen, implying that ORF and CRISPRa libraries can be used in complement to study gene function.

Applications for the Root and Doench CRISPR libraries