New and Upcoming Viral Vectors - May 2020 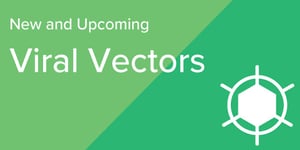 Since the beginning of our viral service in 2016, we’ve added many new tools to our inventory of ready-to-use viral vectors. Here are some of the AAV and lentiviral preps we have released in the last few months:

The Krogan lab quickly shared plasmids expressing SARS-CoV-2 proteins at the beginning of April. Now, we've turned some of the most requested plasmids into lentiviral preps to speed up COVID-19 research even further. The following lentiviral preps are now available:

The Dolcetto pooled library is now available as a lentiviral prep. It's a human CRISPR inhibition library that inhibits over 18,000 human genes and is used for genome-wide inhibition screening.

Control AAV allow researchers to not only interpret their results, but also confirm expression in target cells. While the various AAV serotypes can be used to achieve different patterns of expression, researchers often need to determine these transduction patterns empirically for their own experiments. To this end, we offer control AAV in smaller aliquots of 20ul for serotype testing to help you pick the best AAV for your experiment. The Addgene viral service has now expanded to offer many of our control plasmids in new serotypes, as well as a new Cre dependent GFP control plasmid for expression in forebrain GABA-ergic interneurons (83895).

See our Serotype Testing AAV inventory for the entire collection!

Optogenetics continues to supply neuroscience with ever more efficient tools for light mediated neuronal control. The advantages of optogenetics lie in the spatiotemporal control offered by the system that allows for specific manipulation of neurons. We have expanded our AAV collection to include two new ChR2 constructs that allow for targeted expression. Plasmid 75470 is now available in AAV1 for Flp-dependent expression of ChR2(H134R) bound to an mCherry reporter. We now also offer AAVrg for plasmid 83898, which targets expression of ChR2 to forebrain GAB-ergic interneurons through the mDlx enhancer element.

Chemogenetics offers noninvasive methods for manipulating cell activity, particularly in the brain, and holds promise in the development of future therapies. Our popular plasmid encoding a Cre dependent version of the DREADD hM3D is now also offered as AAV1 (along with AAV PHP.eB, AAV Retrograde, AAV2, AAV5, AAV8, and AAV9). Once activated, this DREADD acts through the Gq pathway and promotes neuronal firing.

Recombinase systems such as Cre-lox allow for more accurate cell and tissue targeting. While promoters and AAV serotypes can sometimes be used to target tissue types, recombinases allow you to further restrict gene expression to areas in which the recombinase and construct are coexpressed. Three new recombinases from the Cepko Lab are now available as AAV1. CRE-DOG constructs 69570 and 69571 together encode the N and C terminal segments respectively of a GFP dependent Cre. The two segments come together in the presence of GFP to form a functional Cre enzyme that induces recombination of lox sites. This system takes advantage of the extensive supply of transgenic reporter lines that supply a variety of GFP expression patterns, thus allowing you to further restrict gene activation to cells expressing both Cre and GFP. The GFP dependent FLPo, Flp-DOG (75469), is also available in AAV1.

These vectors listed below should be released at Addgene in the next 6 months, pending quality control. For an estimate on availability date or to be notified when a particular catalog item is available for order please email help@addgene.org with the vector name and serotype you’d like to be notified about.