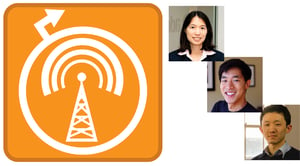 In this episode of the Addgene podcast, we sit down with Addgene’s Founders - Melina Fan, Ken Fan, and Benjie Chen. We learn what it was like to get Addgene off the ground and what the founders hope to see in the repository’s future. If you’ve ever been curious about what it takes to start your own nonprofit, this is the episode for you.

Listen to the interview with Addgene's founders

Chapter 1 - Who are Addgene's Founders?

Chapter 2 - The process of founding Addgene, where the idea for Addgene came from and how the idea got off the ground

Chapter 8 - Opportunities to create repositories with other materials

Chapter 9 - The Founders' current roles at Addgene and beyond - Ginkgo, Tufts Launchpad, and more

Chapter 10 - Addgene's Future, the research team, and the importance of sharing information/knowledge

Many thanks to our guests, Melina Fan, Kenneth Fan, and Benjie Chen!

Melina Fan is a co-founder of Addgene. Melina received her Ph.D. in Cell Biology from Harvard University, where she studied diabetes and metabolism. Melina has worked at Genetics Institute in Cambridge, MA and Sequana Therapeutics in San Diego, CA. She earned a B.S in Biology from MIT.

Kenneth Fan is a co-founder of Addgene. Kenneth received his Bachelor of Science degree in Computer Engineering from Tufts University and his Master of Arts in Law and Diplomacy, with a focus on international technology management, from the Fletcher School at Tufts. From 2004 to 2015, Kenneth led business efforts at Addgene as the Chief Financial Officer and Chief Operating Officer. Prior to Addgene, Kenneth was an investment banking analyst at Credit Suisse’s Technology Group in Palo Alto, CA.

Benjie Chen is a co-founder of Addgene and received his PhD in Computer Science from MIT. His research focused on computer systems and networks. Benjie was Addgene's Director of Technology for 7 years, and is now Chief Software Engineer at Ginkgo Bioworks. He also holds a SB and a Masters in Engineering from MIT, both in Computer Science.

Additional Resources from the Addgene Blog