What are exosome AAVs?

In 2012, Casey Maguire and colleagues from Massachusetts General Hospital and Harvard Medical School took a closer look at the AAV vectors that are released from cells during production (Maguire et al., 2012). They saw that these AAV particles come in a slightly different shape. These AAV particles are often found with cellular exosomes, small membrane vesicles or microvesicles (approx. 40 - 150 nm diameter) that are secreted from the cellular membrane into the culture medium. AAV particles are either associated with the outside surface of the exosome or are carried inside the vesicle, which may also contain other cellular molecules such as proteins or nucleic acids. This conjunction of vectors and exosome was given the name vexosomes (vector-exosomes), exosome AAVs, or exo-AAVs (Figure 1).

The researchers discovered that these particles have some advantages over the conventionally purified AAV vectors. They found that they have a higher transduction efficiency, i.e. the same number of AAV particles is able to infect more cells (as demonstrated in different cellular environments such as retina or glioblastoma). They also found that exo-AAVs were more resistant to neutralizing anti-AAV antibodies. This is particularly useful for therapeutic applications in vivo where endogenous anti-AAV antibodies often neutralize the therapeutic efficacy of AAV vectors. 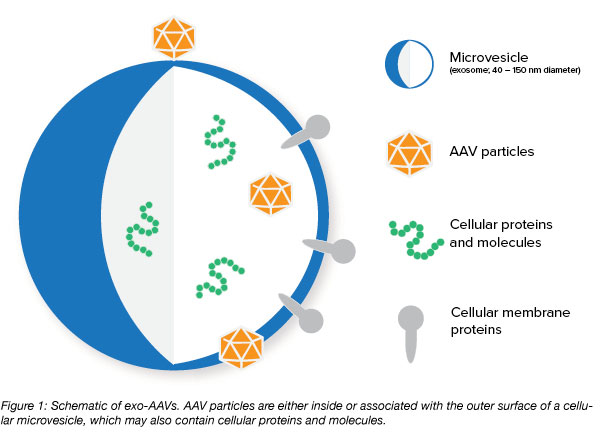 How are exosome AAVs produced?

Since the development of the exo-AAV isolation protocol by Maguire and colleagues, other researchers have tried to modify it to improve yields. For example, transfecting the producer cell line with an expression vector for CD9 (a known marker molecule for microvesicles) can further improve AAV yields as CD9 is thought to enhance the production of exosomes or stabilize their structure or their interaction with AAVs (Schiller et al., 2018).

Exosomal vesicles secreted from producer cells also contain cellular macromolecules (e.g. proteins, nucleic acids) which possibly improve transduction properties. György and colleagues found that the association of AAV particles with membrane vesicles protects them from antibody recognition and inactivation (György et al., 2014), but scientists have yet to decipher the mechanistic aspects behind these improvements. 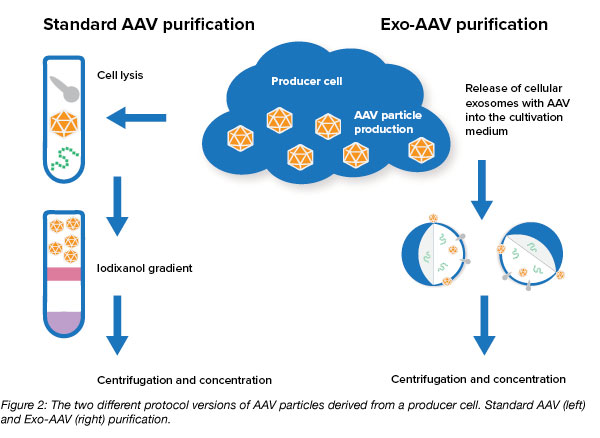 What have exosome AAVs achieved so far?

Exo-AAVs have improved transduction profiles in different AAV serotypes both in vitro and in vivo when compared to the conventional AAVs (AAV preparations were always normalized to their genomic titers). Examples include the use of exo-AAV1 for transducing sensory cells in the inner ear in a mouse model of human deafness (György et al., 2017), exo-AAV2 in mouse retina after intravitreal injection to transduce bipolar cells and photoreceptors (Wassmer et al., 2017), and exo-AAV8 expressing human coagulation factor IX in liver in a mouse model of Haemophilia B (Meliani et al., 2017). Exo-AAV9 was successfully shown to transduce neurons in the brain after systemic (i.v.) delivery in mouse (Hudry et al., 2016), and could also more effectively target less accessible cells, such as brain tumor stromal cells in a mouse model of glioblastoma (Volak et al. 2018).

The structure of exosome AAVs is related to the use of microvesicles as a vehicle for drug delivery that has recently gained interest special contexts, such as the delivery of therapeutic proteins to the brain which requires crossing the blood-brain-barrier.

In summary, exo-AAVs seem to target cell types with a similar specifically as conventionally produced AAV particles. But, exo-AAVs may open new ways of improving gene delivery. They increase the efficiency of transduction, broaden the use of AAVs in target cells and areas that are difficult to reach, and are more resistant to inactivation through anti-AAV antibodies.