How to Keep a Lab Notebook for Bioinformatic Analyses 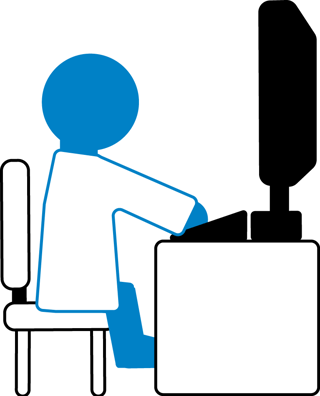 Traditional lab notebooks just won't cut it for bioinformatics. All kinds of biologists are finding themselves using computational approaches to analyze large data sets (myself included) and we are faced with finding the best system to document these types of analyses and their results. We are adept at recording wet-lab experiments using a “traditional” lab notebook; however, keeping track of computation work comes with new sets of challenges. One challenge with computational analyses is to keep track of why you are doing what you are doing. Another common challenge is to keep track of what works, and what does not work. Careful documentation will keep you on task and will prevent you from getting lost in the wide word of informatics.

I am a molecular biologist who began coding for my thesis project a few years ago when my advisor and I decided to do a massive RNA-seq analysis. I had never interacted with a computer at the command line, and so was really starting from the beginning. Luckily, a fellow graduate student and a data analyst in our lab took it upon themselves to teach me Python, a programming language favored by biologists. Almost as soon as I began, I realized that I needed a system to keep track of the files that I was continuously generating.

I quickly found that there is no one way to keep a virtual lab notebook for bioinformatics. In fact, there are endless ways and everyone finds their own. Here, I simply outline what works for me, and I hope that it is helpful to those of you just getting started. The practices suggested here may seem tedious at first, especially since you’ll want to dig in to the computation, but they will serve you well as you perform analysis after analysis after analysis…

I use the text editor TextWrangler to record the following, which are later printed for my physical lab notebook, along with any figures generated from the analyses: 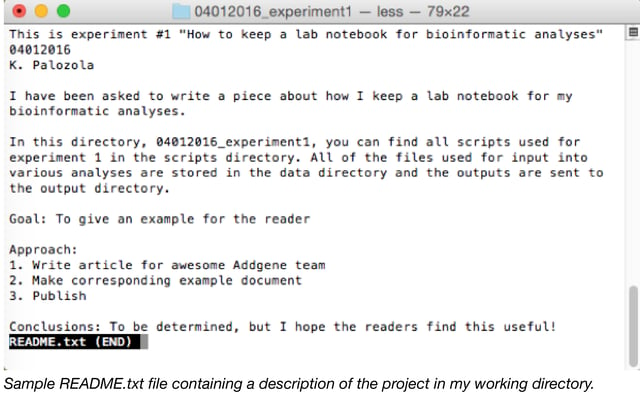 These are the simple rules that I try to follow in my own research. Again, some of this may not apply or may not work for you. The best way to find a system that does is through trial and error, and by asking for tips from others. Comment below to add your tips!