Gendered Innovations: Why Does Sex of the Cell Matter? 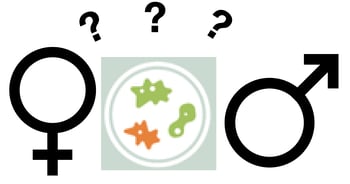 Sex and gender are critical components of biological research that are often forgotten or ignored. If we wish to conduct research that fails less and helps more people, we need to take sex into account. Gendered Innovations is an international, collaborative project—funded by the European Commission, the US National Science Foundation, and Stanford University—that harnesses the creative power of sex and gender analysis for innovation and discovery.

Tackling sex and gender in research 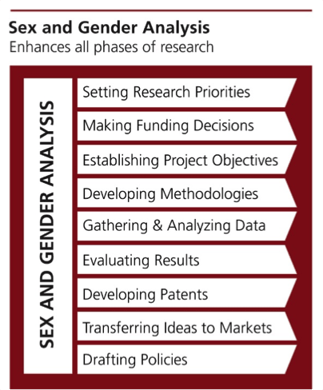 Governments, universities, and, increasingly, corporations in the US and Western Europe have taken three strategic approaches to gender equality over the past several decades:

Why are sex and gender analysis important? Doing research wrong costs lives and money. According to the US General Accounting Office, between 1997 and 2000, ten drugs were withdrawn from the US market because of life-threatening health effects. Eight of these posed greater health risks for women than for men. Not only does developing a drug in the current market cost billions—but when drugs fail, they cause human suffering and death.

Doing research right has the potential to save lives and money. A 2014 analysis of the US Women’s Health Initiative Hormone Therapy Trial, for example, found that the study saved lives. Reduced use of estrogen plus progestin hormone therapy resulted in 76,000 fewer cases of cardiovascular disease, 126,000 fewer breast cancers, and 145,000 more quality-adjusted life years. While most of the results were positive, the analysis did find 263,000 more osteoporotic fractures. The overall economic savings to the US healthcare system was $35.2 billion (or $140 per $1 invested in the trial).

The goal of gendered innovations

It is crucially important to get the research right from the beginning. This is the goal of Gendered Innovations. This project: 1) develops state-of-the-art methods of sex and gender analysis and 2) provides case studies with concrete examples of how gender analysis leads to discovery and innovation.

One such case study looks at the effects of using all female cells and tissues, specifically in stem cell therapies. Let’s go back to why ten drugs were withdrawn from the market between 1997 and 2000. There are many reasons why drugs fail - sex is one of them.

Why might the sex of the cell be relevant? Research shows that there are sex differences in the therapeutic capacity of stem cells. Yet, very few researchers consider the sex of their cells when doing experiments—which can lead to failed research. For example, an international research team from Norway and Australia worked with stem cells in mice. They appropriately used male and female mice (using both sexes in basic research is excellent design), but they used all female stem cells—this was an unconscious and arbitrary decision. Unfortunately, it also meant that, by the very nature of the way the experiments were performed, they did not see anything unique to male stem cells. Nor did they detect important differences in function between male and female cells.

The result of not considering the sex of the stem cells was that their male mice died—and they didn’t know why. Eventually, through a Gendered Innovations workshop in Norway, the team realized they should also consider the sex of the stem cells. In this case, they found that sex-matching of donor and recipient yielded the best results, but this result shouldn’t be taken for granted for all research going forward. It’s just not that easy. All combinations of donor/recipient interaction should be tested before being ruled out; there are many factors that interact with sex, and it’s important to analyze these factors during an experiment. In the case of stem cells, these factors may include cell type, the disease being treated, and other hormonal, immunological, and environmental factors.

How to include sex in experimental design

Recognizing the importance of analyzing sex, the National Institutes of Health (NIH) now requires that sex be included as a biological variable in all NIH-funded research. Janine Clayton, Director of the Office of Research on Women’s Health, emphasizes that reporting the sex of cells and tissues—when that information is reliable—is important to ensuring excellence in basic research.

In addition to the studies referenced above, another excellent resource for research design is Kalpit Shah et al., “Do you know the sex of your cell?” I can’t tell you how many researchers I’ve talked to who’ve never considered the sex of their cells. For one thing, cells and cell lines degenerate over time—and sex can be hard to determine. To remedy this, Shah et al. provide a table indicating the sex of the most commonly used cell lines appearing in American Journal of Physiology-Cell Physiology over the past decade.

For more practical help, there are numerous methodological articles to consider—we have loaded those we are aware of in our checklist for tissue and cell research. Using cells from both sexes ensures that the diagnostics and therapeutic interventions you develop represent the whole human population.

To learn a little more about where differences in effects on the sexes come from, one clue or potential place to start research is by considering sex disparities in disease severity. Such disparities might suggest underlying sex-based influences on physiologic or pathologic processes. Much progress has been made in this area in recent years, and you can see a summary of this literature in our health and medicine checklist.

A common worry for researchers wanting to consider sex is cost. Especially in animal research, they worry about needing more study subjects and control groups. The important point, however, is that cost at this early stage of research is minimal compared to that of human clinical trials. And, as Janine Clayton points out, late-stage clinical studies that draw from a body of research that is incomplete (because sex was not analyzed) may harm humans or contribute to failures in drug development – costs far greater than those of doing the research correctly from the get go.

The future of sex and gender in research

There is much work to be done! Researchers need to learn sophisticated methods of sex and gender analysis. Universities need to incorporate these methods into their curricula. Corporations need to integrate these insights into product design. But eyes have been opened—and we cannot return to a world that ignores gender.

Londa Schiebinger is a leading international expert on gender in science and technology and currently directs the EU/US Gendered Innovations in Science, Health & Medicine, Engineering, and Environment—a project aimed at harnessing the creative power of sex and gender analysis for innovation and discovery. She is a member of the American Academy of Arts and Sciences and the recipient of numerous prizes and awards. Schiebinger addressed the United Nations on the topic of “Gender, Science, and Technology” in 2011 and again in 2014.