Note: After this blog was published, a bioRxiv preprint that questions the conclusion of inter-homologue recombination was released. This blog has not been updated in response to this paper.

Any hint of CRISPR editing in human embryos has been met with a storm of media coverage. But the paper published August 2nd in Nature gives us even more to talk about, as it represents another step towards CRISPR germline editing of disease-causing mutations. But how close are we really, and what new questions does this paper bring up? We’ll sift through the paper to understand what Shoukhrat Mitalipov and his colleagues have achieved, and how the field will move forward from this work.

Let’s start with the paper itself: Ma et al. were interested in correcting an autosomal dominant mutation in MYBPC3 that leads to hypertrophic cardiomyopathy. An adult male with a heterozygous 4 bp deletion in MYBPC3 donated skin, blood and semen samples. Ma et al. designed plasmids containing Cas9 and two different gRNAs, and electroporated them with an ssODN repair template in induced pluripotent stem cells made from the patient. With the first gRNA, they noted low editing efficiency, with a total targeting efficiency of only 27.9% and homology-directed repair (HDR) taking place in 41.2% of edited cells. The results were even lower for the second gRNA: 13.1% targeting efficiency with only 13% of edited cells employing HDR.

Ma et al. moved forward with gRNA 1 to conduct microinjection experiments in S phase zygotes at 18 hr post fertilization. They observed higher targeting efficiency than in iPSCs, but with the caveat of mosaicism. To circumvent this problem, they co-injected CRISPR machinery with sperm into M phase oocytes, thus allowing repair to take place before DNA replication. Indeed, they observed that 41/42 embryos were non-mosaic at 3 days post fertilization.

Since Ma et al. designed a repair template with two synonymous mutations to distinguish it from the wild-type allele, they were able to distinguish between repair from the template vs repair from the maternal MYBPC3 allele. Interestingly, they found that the embryos underwent repair not from the single-stranded oligonucleotide (ssODN) template supplied by Ma et al., but instead from the mother’s wild type allele (Figure 1). 72.4% of embryos carried two wild-type copies of MYBPC3 (versus 47.4% of untreated controls.) 27.6% of embryos carried indels at the mutation site, indicating that repair proceeded through NHEJ rather than HDR. 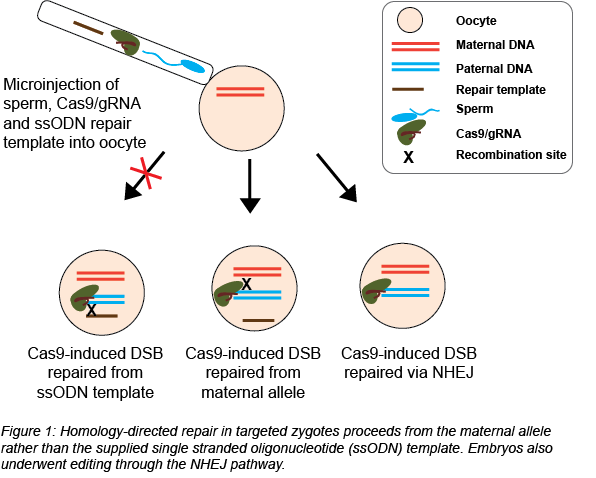 In later characterization studies, the edited embryos proceeded to the blastocyst stage at similar rates to untreated controls. Ma et al. performed sequencing of 23 potential off-target editing sites in the embryos, as well as whole exome sequencing of embryo derived-ES cells.They also conducted whole genome sequencing in selected control and CRISPR-Cas9 injected embryos. In all cases, they did not observe off-target effects attributable to CRISPR editing.

One striking feature of this paper is the failure of the embryos to undergo editing using the provided ssODN template. In fact, this finding led the authors to title the paper “Correction of a pathogenic gene mutation..” rather than using term ‘editing.’ While repair using endogenous chromosomal DNA is appealing for heterozygous mutations, it will clearly be much more challenging for homozygous mutations. Moreover, introducing new DNA seems impossible with current tools, thus quieting some fears about the creation of “designer babies.”

The differences in editing between iPS cells and embryos make a case for conducting research in embryos should our society decide that germline editing is permissible in cases of disease prevention. However, it is important to consider that already-tested CRISPR alternatives are applicable in many situations. In the case of hypertrophic cardiomyopathy and other genetic disorders, pre-implantation genetic diagnosis (PGD) screens embryos to find those that do not carry a given dominant disease-causing gene, or that carry only one copy of a recessive gene. Ma et al. claim that CRISPR would still be helpful in increasing viable embryos, especially in the case of older mothers, for whom egg retrieval often results in fewer eggs. However, the potentially staggering costs of such a treatment on top of the expense of IVF render this argument less convincing at present.

Another issue surrounding CRISPR-based therapy is the level of testing needed to define whether off-target editing or mosaicism would occur. Although Ma et al. looked at various predicted off-target effects, they limited their whole genome sequencing to a small percentage of edited embryos. Since the embryos produced were not being used to establish a pregnancy, the researchers were able to examine each individual blastomere to determine its genotype. However, this detailed analysis is not possible with IVF, as most of the cells are needed for proper development. Ma et al.’s experiments showed a 3% mosaic rate, and this rate would need to be much, much lower before clinical applications could be considered.

It is important to consider the question of broader applicability of CRISPR germline editing. Nature News mentions that the MYBPC3 gRNA used in the study had few predicted off-target effects, but this advantage likely won’t transfer to all genes we’d like to target. In addition, as on-target editing rates vary widely from gRNA to gRNA, it’s unclear where this study would fall in terms of editing success rate. Would CRISPR still be worthwhile for a given disease if it increased the percentage of disease allele-free embryos to only 60%? Unfortunately, given the differences between CRISPR repair in embryos and iPS models, it appears that embryo research is the only way to answer questions of efficiency and applicability. Given moral and ethical concerns surrounding such research, it is crucial that scientists proceed with caution and with proper oversight from regulatory and ethics committees comprised of individuals with varied backgrounds.

Talking about this study with non-biologist friends

Like me, you’ve probably seen this study (and various articles and commentaries) pop up on Twitter and Facebook, shared by biologists and non-biologists alike. Given the public significance of this research, we have the obligation to discuss it as openly and accurately as possible. We must note that CRISPR is not a ‘magic bullet’: its use will always come with some uncertainty.

As biologists equipped to understand the results of this paper, we should be willing to correct the hype when we see it. This paper represents a huge advancement in our understanding of how CRISPR will perform in embryos but also shows that many more experiments are needed before we can consider clinical applications for germline editing. Although this paper represents a large step forward in the CRISPR field, it’s important to remember that the study hasn’t achieved any end goal not available with current techniques like PGD.