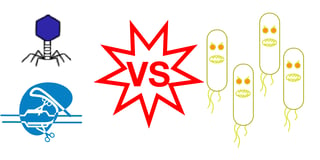 The problem of antibiotic resistance

Most antibiotics target one of three essential processes: cell wall synthesis, DNA replication, or protein synthesis. Because they target such generic processes, antibiotics don’t just affect the bacteria causing an infection, but also alter an individual’s native, beneficial flora. Currently, there is no antibiotic strategy available to target only virulent or antibiotic resistant bacteria, and inappropriate antibiotic usage selects for resistant bacteria, allowing them to multiply and propagate their resistance genes.

Our society is hoping to combat antibiotic resistance using multiple approaches. Major restaurant chains including Chipotle and Panera Bread have pledged to eliminate the use of antibiotics by their suppliers, and public health and medical organizations are working to help educate the public about proper antibiotic usage. Although these steps are laudable, they likely won’t solve the growing problem. Above all, we need new antimicrobials, ideally ones for which the development of resistance will be slow. CRISPR may be just the method needed to jumpstart the fight against antibiotic resistance.

Advantages of CRISPR over traditional antibiotics

The potential advantages of CRISPR over traditional antibiotics are easy to see. As discussed in this blog post, most bacteria have poor non-homologous end joining machinery, so a CRISPR-induced double-stranded break (DSB) in the genome is lethal. If this DSB occurs on a plasmid, the plasmid will be eliminated from the bacterium, which may also induce cell death. CRISPR also enables increased specificity - rather than targeting a process essential to most bacteria, custom CRISPR antimicrobials can target specific sequences in a single virulent bacterial species, or even an antibiotic resistance gene. Importantly, native, non-pathogenic bacteria remain to help recolonize the niche, reducing the chance of an opportunistic infection like for organisms like C. difficile.

In 2014, Citorik et al. and Bikard et al. developed sequence-specific, antimicrobial, plasmid-based, CRISPR systems (Find the Citorik Plasmids here). In both cases, they used 1-2 CRISPR crRNAs targeting sequences found only in certain bacteria (Figure 1). Citorik et al. targeted beta-lactam and quinolone resistance genes in E. coli using plasmid and phagemid delivery systems. Phagemids are plasmids containing a phage origin of replication that can be packaged into replication-incompetent phage particles using a helper system. These CRISPR antimicrobials successfully resensitized a beta-lactam resistant population to the antibiotic, despite this resistance gene being encoded by a high-copy plasmid. In the case of the genomically encoded quinolone resistance, mediated by a single base pair change in DNA gyrase, CRISPR phagemids were cytotoxic only for resistant bacteria.

Bikard et al. used a phagemid system to target virulent S. aureus, a common hospital-borne infection. Two rounds of phagemid treatment were sufficient to wipe out the virulent strain. Bacteria not killed by the first round of treatment either did not receive a phagemid, lost the phagemid or received a defective phagemid; Bikard et al. did not observe any mutations at the target site. In a mouse skin colonization model, phagemid treatment decreased the proportion of virulent S. aureus from 50% to 11% in just 24 hours. 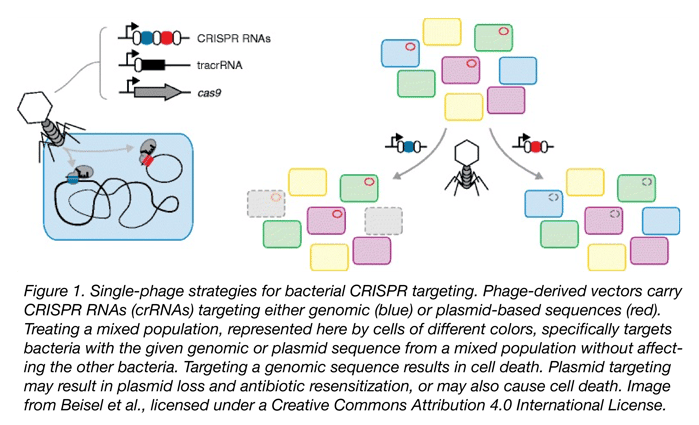 Neither group observed substantial resistance to the CRISPR antimicrobials, and they suggest that targeting multiple resistance/virulence factors may further reduce this likelihood. The key problem with these techniques is efficient delivery, as the antimicrobial must reach essentially every cell or else small pools of antibiotic resistant cells could repopulate the environment after treatment. The phagemid systems used in both papers are analogous to mammalian viral vectors in that the vectors are replication-deficient. Thus, a very large number of phagemids would be needed for an in vivo therapy.

Another strategy for CRISPR antimicrobials combines them with both replication-competent phages and antibiotics. Phage therapy fell out of fashion with the introduction of antibiotics, but the field is currently undergoing a renaissance. Yosef et al. designed a two-phage CRISPR system to resensitize antibiotic-resistant bacteria (Figure 2). The first phage introduced is lysogenic, integrating into the bacterial genome, and it carries CRISPR machinery targeting 1) the given resistance gene and 2) a second lytic phage. Bacteria that receive this phage are now antibiotic sensitive, but lytic phage-resistant. When the lytic phage is introduced, it targets only the bacteria that are antibiotic resistant. Once these bacteria have been killed, antibiotics can be used to target the sensitive population. Yosef et al.’s proof-of-concept work targeted two distinct beta-lactam resistance genes, again with very high specificity. This double phage system both favors antibiotic sensitive bacteria and prevents sensitive bacteria from acquiring resistance genes. Yosef et al. suggest that it could be valuable in medical settings where antibiotic resistant bacteria have previously flourished. Phages could be used to deliver any of the three systems discussed above, with the caveat that phages are very diverse, and each phage has a narrow bacterial host range. To further potential clinical applications, Ando et al. recently engineered synthetic phages, each based on the well-studied T7 phage, to target various types of bacteria. In mixed populations, their phages were highly specific for certain bacteria, just like the CRISPR targeting methods. Phage cocktails could be used to target multiple types of pathogenic or drug-resistant bacteria.

It’s a bit ironic that CRISPR, the bacterial immune system, may someday be used to target the hardest-to-kill bacteria. In using phage-derived vectors to carry CRISPR, we’re turning the tables on the bacteria. Future research will show if this new strategy can help us win back ground in the fight against bacterial superbugs.