In January 2016 we first published a blog post titled: Which Cas9 Do I Choose for My CRISPR Experiment? The three years flew by, but since then, scientists have adapted CRISPR nucleases for many more specific research needs. In this update, we will focus on the most recent advances and how some of these variants may be appropriate for your specific research question.

Considerations when choosing your Cas nuclease

When choosing the Cas9 nuclease for your experiments, there are three important factors to consider: site accessibility, specificity, and sensitivity. 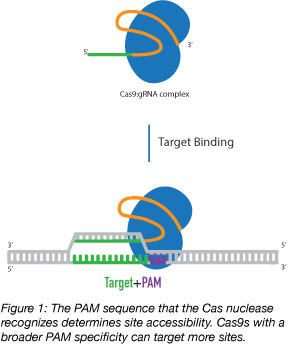 Site accessibility is a measure of which genomic sequences can be targeted by the Cas9. This is determined by the PAM sequence recognized by the nuclease. For the most frequently used Cas9, spCas9 from Streptococcus pyogenes, this sequence is 3’-NGG. But Cas9s found in other species can recognize a variety of different PAM sequences. Researchers have also used experimental evolution to develop Cas9s that have a broader PAM specificity, allowing for the targeting of sites that were previously unavailable.

Specificity is the assessment of the off-target activity of Cas9. This can occur when Cas9 cleaves a site that is not a perfect match to the guide RNA (gRNA) used to target the genomic locus of interest. As these off-target effects can be genome-wide and, in some cases, difficult to determine, the potential for off-target cleavage should be an important consideration during any experiment.

In order to generate a genomic alteration at a specific location, it must be accessible by Cas9. Our previous blog post The PAM Requirement and Expanding CRISPR Beyond SpCas9 described the PAM specificity of Cas9s isolated from different organisms and engineered Cas9 variants that were able to target different PAM sites (NGG, NGAN, NGNG, NGAG, and NGCG). Since then, the Osamu Nureki Lab described a rationally engineered Cas9, SpCas9-NG, which required only the di-nucleotide PAM NG (Nishimasu et al., 2018). The David Liu Lab similarly described xCas9, which displayed the ability to target multiple PAM sequences (NG, GAA, and GT), greatly increasing the number of genomic loci that can be targeted (Hu et al., 2018).

These altered variants can allow for targeting of your genomic loci of interest that may not be accessible by wild-type Cas9, due to its stringent PAM specificity. This can be especially important for base editing techniques, where Cas9 must be directed to a very specific site.

Specificity vs. sensitivity in choosing the Cas9 to use in your experiments

Another important consideration when choosing a Cas9 is balancing specificity and sensitivity. Wild-type Cas9 exhibits high on-target activity, but also high off-target activity, which may be undesirable in many applications. At the time of our first blog post on choosing a Cas9, the Feng Zhang Lab had described eSpCas9, while the Keith Joung Lab had developed SpCas9-HF1. Both of the enzymes showed decreased off-target activity relative to Cas9. Since then, the Joung and Jennifer Doudna Labs used targeted mutagenesis to generate hyper accurate Cas9 (HypaCas9). This nuclease showed decreased or similar off-target activity, relative to eSpCas9 and SpCas9-HF across a number of different sites. Using a combined random and directed mutagenesis approach, the Anna Cereseto Lab created pX-evoCas9, which they showed also increased specificity.

Most recently, the Jungjoon Lee Lab used directed evolution to generate Sniper-Cas9 resulting in a Cas9 with improved specificity. They compared on-site and off-site activity of Sniper-Cas9 to different Cas9 variants using gRNAs of different lengths (Lee et al., 2018) and found that Sniper-Cas9 showed a high degree of both specificity and sensitivity across a large number of loci and gRNA lengths.

While Cas9 remains the most widely used CRISPR nuclease, recent work has shown that alternative enzymes may better suit specific experimental approaches. One example is CasX, characterized by the Oakes and Doudna Labs, which is both small and potentially less likely to elicit a strong immune response, factors that may make it especially suitable for in vivo research and potentially treatments. Cas12b, characterized by the Zhang (Strecker et al., 2019) and Li (Teng et al., 2018) Labs also shows promise for in vivo research due to its small size and specificity relative to Cas9. As scientists continue to characterize CRISPR nucleases from a variety of sources, it is likely that the toolkit available to researchers will continue to expand.

Since the first use of Cas9 to engineer the genome, there are more and more Cas enzymes and variants to choose from. While no enzyme is perfect for all experimental approaches, knowledge of both the advantages and limitations of each Cas enzyme can help determine which enzyme to use. Remember, accessibility, specificity, and sensitivity are key considerations in choosing a Cas protein for your experiment.