Capturing a Moment with Marc Zimmer’s “The State of Science” 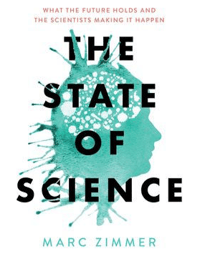 Marc Zimmer’s recent book, The State of Science: What the Future Holds and the Scientists Making It Happen, is an exercise in restraint. The very first subheading in Chapter 1 asks “What is science?” That’s a very big question. Zimmer, a Professor of Chemistry at Connecticut College who has been teaching and communicating science for over two decades, attempts to answer it in five paragraphs, with examples.

If that sounds ambitious, that’s because it is. Zimmer, whose previous books focused primarily on fluorescent proteins and their applications, tackles much broader issues in this brief volume. He examines, amongst other topics: racism and sexism in science, problems with peer-reviewed publications and funding, bioethics in the age of CRISPR, and the challenges of science becoming increasingly politicized. It would be nearly impossible for a career scientist such as Zimmer to introduce any one of these topics without some editorializing, and he wisely makes no such attempt. He is transparent about his own biases--many of which will be shared by fellow scientists--but that doesn’t make his introduction to these topics any less effective.

Who is this book for?

A reader’s take-aways from this book will likely depend on whether or not they’re a scientist.

Scientists, or anyone who otherwise follows science closely through their careers or hobbies, are unlikely to be surprised by many of Zimmer’s revelations. The issues he discusses have been making the rounds in journal editorials, science social media, and conference workshops for years. That is, presumably, why they ended up in this book. Some of these issues are not particularly new. Chapter 2, “The Professional Scientist,” addresses the challenges of succeeding in science if you’re anything other than a white male. “The Nuts and Bolts” is the title of the chapter that examines the inherent brokenness of scientific publishing and research funding. I’ve been aware of these problems since I began my own career over 20 years ago, and I’m sure they were issues long before then. Other areas are newer, such as the relatively recent resurgence of “Do-It-Yourself Science” described in Chapter 3, and of course the rapidly changing world of genome engineering via CRISPR.

Though the individual topics are not surprising, the real value here is seeing them all in one place. Can we address problems in scientific publishing without acknowledging the systemic sexism in the scientific world? Would biohackers even be a thing if CRISPR hadn’t made manipulating the genome cheap and relatively easy? Have all of these things contributed to the steadily increasing distrust the general public has in science and scientists (as discussed in Chapter 11)? Even if some of the problems are addressed in a somewhat cursory manner, their inclusion here adds much needed context to understand every other problem.

For non-scientists, Zimmer’s observations will likely range from mildly surprising to genuinely shocking. Mainstream media outlets have addressed CRISPR frequently over the last several years, but lay readers may be less familiar with gene drives and their ramifications. Readers unfamiliar with academia’s challenges with publication and funding may be dismayed to see the dirty laundry exposed here, but it’s unclear how much they will actually care. The section of the book I’d really like to press upon my non-scientist friends and family is Part Five, called simply “Bad Science.” Zimmer kicks off the section saying “science itself is never inherently bad or evil. However, it is easy to do sloppy science, misrepresent science, or misuse science, and that is what I would call bad science.”  The three chapters in this section describe the challenges of trusting science in a “fake news and post-truth era,” the politicization of science (from climate change deniers to anti-vaxxers), and the very real dangers of quackery, which is as pertinent now as it was over 300 years ago.

No examination of the state of science would be complete without the inclusion of some interesting case studies, and Zimmer provides several. In Part Three of the book, called simply “Old Science,” he describes the now infamous tale of Rosalind Franklin and her essential-but-unlauded role in the identification of DNA’s double helix. Perhaps to the dismay of middle-aged scientists, the identification of Green Fluorescent Protein (GFP) and its development into an essential tool in biology also falls within this section. The GFP story has its own Franklin in Doug Prasher, who originally isolated the GFP gene but was not included amongst the Nobel prize winners for developing the technology. Though these case studies are “old,” they lead Zimmer to one of his most critical observations: “Today the most successful scientists have outgoing personalities to supplement their intellectual prowess and scientific skills. This is an era of social media and self-promotion, and personality is playing an increasingly important role in science. The science produced by the quieter, more reserved Franklins and Prashers will find it increasingly difficult to compete (for funding, etc.) with that produced by the confident and flamboyant Watsons.”

In Part Four, “New Science,” Zimmer tackles more recent examples of scientific advances, and posits the way science is being done has changed significantly over the last decade. He describes the detection of gravitational waves--a story I was much less familiar with as a biologist--as an example of “big science,” a massive, expensive project that required collaboration from scientists around the world. The paper describing the waves’ detection had over 1,000 authors. The chapter on deep learning addresses the dilemma of creating a technology that could eventually replace scientists themselves.

The sections on optogenetics and CRISPR of course address some of the ethical implications of using these technologies, but also the rapidity of the technologies’ adoption by the scientific community and their game changing nature. Full disclosure: Zimmer also spends some time on Addgene’s role in the rapid dissemination of these technologies, proposing that “Addgene, with its easy, fast, and cheap distribution of the newest CRISPR-Cas plasmids, has been a key driver of the technology.” As an Addgene vet of 12 years, I’m very familiar with the role our repository has played in these fields, and seeing names like Feng Zhang, Jennifer Doudna, Karl Deisseroth, and Ed Boyden crop up in this book was quite a walk down memory lane for me.

A brief window in time

“The most obvious future consequence of the undermining of the scientific process and the marginalization of science, particularly public health and environmental science, by the Trump administration are difficulties in dealing with climate change, the degradation of the U.S. environment, and a decline in the competitiveness of U.S. science and technology.”

This last section of the book, Future Science, describes the author’s thoughts on science’s biggest challenges over the coming years. It is arguably the most subjective chapter of the book, but that’s unlikely to be foremost in readers’ minds. Six months ago I would have nodded my head knowingly and appreciatively throughout this chapter. Now, these observations and suggestions are not so much inaccurate as already somewhat dated. Zimmer could not have predicted COVID-19 and the profound effect it's had on science in a very short period of time.

Though climate change certainly still is and will continue to be a “critical consequence of ...the marginalization of science,” we know now in the summer of 2020 that the consequences of undermining science are even more immediate and dire than Zimmer could have imagined. Does this detract from the quality of the book? It doesn’t need to. The problems and challenges described in The State of Science have not changed in “COVID times,” but the pandemic has certainly exacerbated them and forced scientists to change their priorities. For many scientists, COVID-19 will fundamentally change what they research, how they conduct their research, and in some cases, if they conduct their research. Even if Zimmer was able to rewrite the last chapter of his book today--the day you are reading this review--in the current period of rapid flux, the chapter might still feel slightly dated by next week.

When I discussed The State of Science with the five Addgene colleagues who read it with me, the consistent response from scientist and non-scientist alike was that the book left them wanting to learn more. There are individual paragraphs that may have warranted their own chapters, and certainly chapters that could warrant their own books. Multiple books have been written about CRISPR alone, and Zimmer himself has written entire books about optogenetics. Defining science and summarizing its past, present, and future in under 200 pages is an impressive task to set oneself. As a scientist who enjoys learning a little bit about many different things (part of the reason Addgene has been such a great fit for me!), the book was a well-executed overview that recontextualized some areas of science that I’ve been thinking about a long time. For the scientists who like to learn everything about one specific topic, The State of Science could be a jumping off point to explore future rabbit holes. For the non-scientists in your life, the book may be the introduction they need to grasp the challenges you face in your career.

Acknowledgements: I would like to thank fellow Addgenies Joanne Kamens, Marcy Patrick, Aliyah Weinstein, Fabienne Furt, and Quintin Marcelino for their helpful discussion of this book.