Binning Singletons: Tackling Conference Networking When You Don’t Know Anyone

This post was contributed by Joe James from Binning Singletons.

The sheer scale of a large conference can be intimidating. And it can be exacerbated when everyone seems to know one another, but they don’t know you. First time attendees and those attending alone often feel this even more, because they don’t have the networks or experience to get the most of meeting.

I experienced this at the ASM General Meeting (now Microbe) in 2013 in Denver, CO. While I had been to the General Meeting seven other times I had subsequently changed fields and my cohort of friends and colleagues had moved on as well, so I knew very few people. I didn’t really fit in anywhere and everyone who was doing the kind of work my lab wanted to do already seemed to know each other and what to do.

I had, however, started a Twitter account, and was following the meeting hashtag. I noticed Holly Bik live-tweeting about topics I needed to know more about. I caught up with her outside the room and sheepishly explained my situation and asked if she had a few minutes to point me in the right direction for my future work. She graciously took me for coffee and spent an hour with me talking about the tools I could use, and some experimental hurdles I would encounter. This was invaluable to me as a bench scientist working at an institution where training opportunities weren’t always available. Even more valuable, however, was when she invited me to lunch for a “tweet-up” with other folks at the meeting. I didn’t know anything about these people at the time, but I met some very accomplished scientists and some rising stars in the world of microbiology, some before they had even established their own labs.

Fried chicken with a side of inspiration

I look back at the meeting with such fondness, knowing that, as a 38 year-old with many years of experience in my job, I was willing to introduce myself to someone new and ask for help. That was NOT something I would have done at my first six ASM meetings. I told this story over a great dinner at Pittypat’s Porch with old and new friends while attending ASM Microbe in Atlanta, GA, in 2018. A lot of my experiences rang true with theirs.

It was at this dinner and the next couple of days of discussion with my dinner partners Denise Akob and Geof Hannigan that the outline for Binning Singletons came together. The term Singleton was on my mind because we’d had discussions in my lab about whether or not to keep DNA sequencing singletons (reads that only appear once) in our analysis. Many pipelines toss these singletons out, and there is healthy debate online about this (our lab keeps singletons). I felt like anyone at a meeting who felt isolated at a conference for any reason was a Singleton.

Help me stranger - Finding mentors for the meeting

Just like analysis pipelines for DNA that group similar sequences together in bins, we thought that binning Singletons together would provide a structure and support network for people attending large meetings. A key was to provide each bin with a mentor who had attended the meeting multiple times before and would help the Singletons plan for and network at the meeting. We found our mentors by asking for help with the program on social media. Many of the people who participated as mentors or promoters were connected to that Tweet Up in 2013. These existing connections brought in folks I didn’t yet know and promotion from those who could not participate but provided moral support was invaluable.

We refer to the process of mentoring within a bin as Horizontal Transfer. This comes from horizontal gene transfer, which occurs when bacteria of different evolutionary lineages share genes that can improve chances of survival for an individual, and eventually, a community. The experiences of the mentors were very valuable when shared with the next generation of scientists. The connection between mentors and Singletons can accelerate the networking timetable for the Singletons in their bins.

The next component of Binning Singletons is when we bring all the bins together at a mixer. We call this Quorum Sensing, after the phenomenon in bacteria that occurs when bacterial cells regulate gene expression in response to changes in cell density. At the mixer, they meet other Mentors and Singletons, and vastly expand their networks as they naturally find people with which they have interests and experiences in common. We often refer to this as “finding your people.”

The last stage is Exponential Growth, named after the growth phase when bacteria in favorable conditions double their numbers rapidly. The knowledge the Singletons gained from spending time with a mentor, as well as having a cohort experiencing similar situations to themselves, allowed the participants to feel more comfortable at a large meeting. They had the confidence to meet someone new, as they’d been introduced to several people by their mentor, as well as their bin-mates.

The testimonials from participants in Binning Singletons at ASM Microbe in 2019 were overwhelmingly positive. Susanna Harris, of PhD Balance, remarked that “This was not my first time at the ASM Microbe meeting, but it was my favorite because I finally felt like I had a network of people to talk to and attend sessions with.” These sentiments were echoed in the other testimonies we gathered. The program definitely caused a positive stir and was recognized by meeting organizers in their town hall.

Our experience running this program at ASM Microbe in 2019 is written up in mSphere. A post-meeting survey indicated that the program was largely a success, but also helped us find areas for improvement. We will make a greater effort in the future to match people within similar fields (ASM Microbe has eight tracks), something we didn’t have enough people to do in the pilot. We also found that all participants would benefit from more structure with regard to the Mentor-Singleton relationship. Some of the variability was organic, as some people need less assistance than others, but we did have some participants feel like their mentors weren’t as invested in how their meetings went. While this was expressed by only a few people, it was certainly an issue worth addressing. Clear expectations have been established for future participants regarding the activities and time mentors spend with Singletons in their bins. We also sought expertise from many with experience mentoring in STEM, including Addgene’s Joanne Kamens.

We took some big steps after our initial pilot, and look to take some leaps. Binning Singletons is its own organization, working to make scientific meetings more productive for attendees and helping societies help their members get the most out of their meetings. Amanda Gunn ran randomized coffee trials for us at ASCB|EMBO 2019, matching Mentors with Singletons for short coffee breaks. While this was not the more intense mentorship experience that happened at ASM Microbe, we connected people who otherwise might never have met. Binningsingletons.com will be the hub for all our events, tips, and more. We are partnering with ASM and are working together with the society to bring an even more valuable program to Microbe 2020 in Chicago.

Finding our place in networking and mentoring circles

We looked at a lot of approaches scientific meetings have taken to provide mentoring. For example, Goldschmidt conference, Coastal & Estuarine Research Federation (CERF) Biennial Conference, Gordon Research Conference, and the Society for Advancement of Chicanos/Hispanics and Native Americans in Science’s (SACNAS) annual conference all foster mentorship in different but successful ways. Scientific societies and conferences should strive to provide support to early career scientists, students, and those from historically underrepresented groups. Through such mentoring programs, scientists can build and expand their networks and further their career development, and the scientific community can improve the diversity and culture of science. We want Binning Singletons to be another tool conferences can use to foster a culture that brings more value to ALL their members.

Shoutout to our mentors and supporters

Thanks to Dr. Amanda L. Gunn  and Dr. Denise M. Akob for reviewing and commenting.

Binning Singletons is especially grateful to its mentors and supporters during this first year.

Many thanks to our guest blogger Joe James from Binning Singletons. 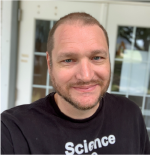 During Junior High and High school in the 80s and 90s, Joe was that kid who used recycled notebook paper, despite the fact that it was gray. He has worked in molecular and microbiology for the last two decades as a staff scientist, but before going to graduate school, Joe taught high school chemistry for a year. The teaching/mentoring bug never went away. While he has frequent bouts with Impostor Syndrome, Joe has found his people through meetings and social media. Joe is a lapsed marathon runner, father of twins (AND a singleton), and is proudly "too weird to be credible." Joe is the founder and President of Binning Singletons, Inc.