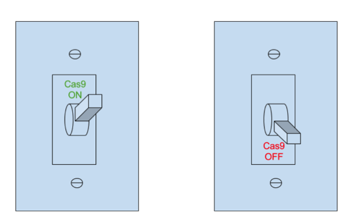 CRISPR-Cas technology is constantly evolving. Variants of Cas proteins can be used for genome editing, activating gene expression, repressing gene expression, and much more. But there’s one thing that was missing: a way to shut off Cas’s activity. The concern is that the longer Cas remains active in a cell, the greater chances there are for off-target edits to occur. Although methods to switch on Cas activity using light or drugs have been developed, the field lacked an “off-switch” for Cas proteins.

That is, until the discovery of anti-CRISPR proteins in 2012 (Bondy-Denomy et al., 2012). Anti-CRISPR (Acr) proteins are phage-derived small protein inhibitors of CRISPR-Cas systems that help phages evade the CRISPR-Cas immune system of bacteria. These Acr proteins were originally found in type I CRISPR-Cas systems.

Four years later, the Sontheimer and Davidson labs discovered three anti-CRISPRs for a type II system in Neisseria meningitidis (Nme) (Pawluk et al., 2016). While Streptococcus pyogenes Cas9 (SpyCas9) is the most used and well studied CRISPR system, N. meningitidis can also be used for genome editing. In this study, the labs found that anti-CRISPR prevents Cas9 activity in HEK293 by reducing editing from ~30% in control samples to 0-10% in Acr samples. Acr proteins can also be used to prevent dCas9 tethering to DNA.

Since these early anti-CRISPR studies, scientists have discovered over 50 anti-CRISPR proteins that interact with CRISPR-Cas systems such as Cascade-Cas3, Cas9, Cas12, and Cas13 (Marino et al., 2020). Some Acr proteins are specific to a particular Cas protein while others can inhibit CRISPR enzymes from multiple species of bacteria.

A note on anti-CRISPR nomenclature

How do anti-CRISPR proteins work?

Anti-CRISPRs proteins are highly diverse but most block CRISPR activity one of three ways:

Five ways to anti-CRISPR proteins in your experiments

Acrs could also be used to reduce off-target edits of base editors, which convert a nucleotide base pair to another base pair at a specific site.

The small size of Acr proteins (~50-200 amino acids) means they can be delivered in vivo using AAV vectors. Having a way to shut off CRISPR-Cas systems prevents the off-target effects and cytotoxicity that result from excessive nuclease activity in tissues (Li et al., 2018).

Acr genes can be used as positive selectable markers in engineering viruses. For example, an Acr gene was used to replace genes in the difficult-to-engineer Sulfolobus islandicus rod-shaped virus 2 (Mayo-Muñoz et al., 2018). Only viral particles that have the gene deletion could replicate when challenged with the S. islandicus CRISPR-Cas system.

Phage therapy uses phage to treat bacterial infections as an alternative to antibiotics. But because many bacterial pathogens possess CRISPR-Cas systems, phage therapy might not be as effective. This is where Acr proteins come in. Acr proteins are small enough that they could be engineered to “armor” therapeutic phages to protect them from pathogenic bacteria’s CRISPR-Cas system.