AAV Titers: Where do they come from and what do they mean?

Remember the game show “The $25,000 Pyramid” where one player tries to get the other to guess a category by listing off things that fall into that category? Okay, let’s play. I’ll list the examples and you try to guess the category: 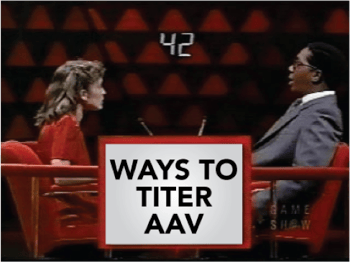 The point is there are many ways to quantify the composition of a viral vector solution, and generally these methods measure different characteristics of the solution. These characteristics give us information on three important factors.

What can AAV titers tell you?

Which titer do people usually report?

Addgene and other viral vector manufacturing facilities report the physical titer of a viral solution (Figure 2). Because physical titers are used for dosing purposes in preclinical studies, it is important to understand what these values mean and how they can be compared.

Historically, a quantitative DNA hybridization method (DNA dot blotting) had been used to titrate AAV, but this method is not widely used today (Fagone et al., 2012).

How can we get more reliable AAV titering?

For our viral service, we currently titrate AAV vector preparations by qPCR. To ensure accurate and reliable results, we have optimized our assay in a few ways:

What do Addgene AAV titers mean for your experiments?

Because (physical) AAV titers are approximations and they depend highly on the experimental conditions used, titer values of samples from different sources should not be compared. If using AAV from different sources in the same experiment, consider retitering both AAV in your lab. The absolute titer values may not be as important as the relative titer values. Finally, because physical titer does not give an indication of infectious titer, consider titrating each lot of AAV in vivo to determine the optimal dosage. At Addgene, we don’t reserve lots, but if you’re reordering the same virus feel free to email us and we can do our best to send you a particular lot (if we still have it available).