Addgene recently moved to our brand new location, with more space to grow and help scientists share resources in new ways. Along with a new location comes the need for new conference room names. The Addgenie’s favorite conference room naming scheme? Gene names! This is not surprising for Addgene. But the names we chose were not just any gene names. Now, we have meetings in rooms such as Groucho, Sonic Hedgehog, Sleeping Beauty, Cookie Monster, Spaghetti Squash, Tinman, and Bagpipe.

How does a gene get its name? Often times, a gene gets its name based on what happens to an organism when a gene/protein is depleted in a knockout experiment. Certain scientific communities have a little more leeway in what they can name a gene and many of the interesting ones come from the fly community. Not surprising, this is where most of our conference room names originated from.

Let’s take a look at some of the stories behind the names. We also have many plasmids in our repository that you can use to study these genes!

The first conference room, that is actually used as a break room for Addgenies, was named after the protein Groucho, a transcriptional co-repressor important in development. Groucho family proteins are found in flies, worms, frogs, mice, and even humans. It binds to a specific set of DNA-binding transcription factors to repress the expression of genes primarily involved in development. These genes are known to play a role in neural development, sex determination, and anterior-posterior segmentation (Jennings and Ish-Horowicz, 2008). Fruit flies that contain a specific loss-of-function mutation in groucho have thick tufts of sensory bristles over their eyes. Scientist thought these thick “eyebrows” resembled those of the comedian Groucho Marx, so the gene was aptly named groucho (Fisher and Caudy, 1998).

Interested in plasmids that contain the groucho gene? Check out plasmids deposited by the Shivdasani Lab from the Dana Farber Cancer Institute! 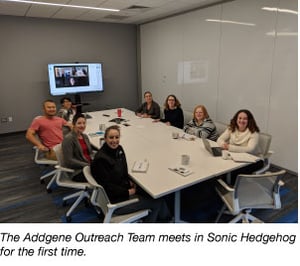 The largest conference room at Addgene is named Sonic Hedgehog but this is not a direct reference to the video game character but rather to an extremely important gene in animal development.

To understand where sonic hedgehog got its name, we need to go back to 1980, when Christine Nusslein-Volhard and Eric Wiechaus first identified the hedgehog gene in Drosophila. They observed that flies with non-functional hedgehog exhibit abnormal segmentation during embryogenesis. Typically, regularly spaced denticles (bristles) outline the segments of the Drosophila embryo. In flies with non-functional hedgehog, the denticles actually clump together forming one patch on the surface, giving the embryo a “spiny and prickly look” that resembled a hedgehog (Nusslein-Volhard and Wiechaus, 1980).

The mammalian hedgehog protein, sonic hedgehog (SHH) was named by a postdoc in Cliff Tabin’s lab who took inspiration from a comic book his daughter was reading. SHH is involved in the hedgehog signalling pathway, which is a key regulator of all bilateral animal development. SHH plays a key role in proper limb and digit formation as well as neural development. Specifically, SHH is a morphogen, a chemical signal that diffuses down a concentration gradient exerting a different effect on the developing embryo depending on its concentration. Genetic mutations in SHH cause severe health conditions such as nonsyndromic holoprosencephaly where the brain fails to divide properly into the right and left hemisphere.

Addgene has several plasmids that contain SHH, you can find them all here! The most popular SHH plasmid however was deposited by none other than Cliff Tabin himself.

Scientists reconstructed a transposase system based on the naturally mutated and non-functional transposase gene found in salmonid fish. What is the benefit of resurrecting this transposon system? Scientists can use Sleeping Beauty transposons as a non-viral system to integrate particular genes into mammalian genomes and easily disrupt gene expression to study gene function. Because this transposase system was “awakened from a long evolutionary sleep,” it was aptly named Sleeping Beauty (Ivics et al., 1997).

We have a lot of plasmids that contain components of the SB transposon system including those from the original publication, Ivics et al 1997.

You may think that a gene called "spaghetti squash" originated from the squash itself, but think again. Spaghetti squash is actually a component of the fly actomyosin cytoskeleton that regulates cellular contraction. This network is composed of actin and myosin which interact with each other to generate forces that cause cells and muscles to contract depending on the context. Contraction is critical for processes such as cell movement/motility, development, cytokinesis, and muscle contractions (think skeletal muscle, cardiac muscle, and your airways and blood vessels).

Spaghetti squash (Sqh) is the Drosophila Regulatory Light Chain (RMLC) of nonmuscle myosin II (Karess et al., 1991, Jordan and Karess, 1997), which contains the regulatory regions that are necessary for myosin activity and thus interaction with actin in nonmuscle systems in the fly. Spaghetti squash has been studied in many contexts within the fly including oogenesis and cytokinesis. Why name this protein after a vegetable substitute for spaghetti? I actually couldn’t find the specific origins of the name but some of our Addgenies had an idea: sqh mutant fly ovaries had “squiggly” actin fibers that resemble spaghetti.

We have two plasmids in our inventory from the lab of Eric Wieschaus that express sqh.

One of our smaller conference rooms is named Cookie Monster. cookie monster (comr) is actually a Drosophila meiotic arrest gene that is necessary for spermatogenesis. Flies that lack cookie monster are sterile due to a failure of primary spermatocytes to enter meiosis. Testis of cookie monster mutant flies are filled with early mitotic cells as well as necrotic or dead cells (Jiang and White-Cooper, 2003). Why call a gene required for spermatogenesis after a Sesame Street character? The scientists who discovered comr thought the sperm cells in mutant flies looked like a “whole bunch of cookie monster eyes.”  Check out the publication to see for yourself.

We have one plasmid in our repository, plasmid 39624, that contains cmr.

Now, let's turn tinman and bagpipe, two genes important for mesoderm differentiation. The mesoderm is the middle layer of a developing embryo which becomes muscles and connective tissues. tinman and bagpipe are both homeobox genes that are part of a genetic cascade that determines the cell fate of the dorsal mesoderm in developing Drosophila embryos (Azplazu and Frasch, 1993).  Tinman, which is spatially restricted to the dorsal mesoderm, is necessary to activate bagpipe which is localized to segmental clusters of the mesoderm. This subdivision of the mesoderm is what gives rise to different tissue types in the developing embryo (Azplazu and Frasch, 1993).

Tinman is specifically involved in the formation of the heart amongst other things. Rolf Bodmer discovered Tinman when he observed that flies with a defective tinman gene fail to develop a heart (Bodmer, 1993). Bodmer named the gene after the Wizard of Oz character whose only wish was to have a heart (Following the Tinman, 2016).

Bagpipe on the other hand, is important in the formation of the visceral mesoderm which differentiates into the muscles of the gut. Embryos that lack bagpipe have severely disrupted visceral mesoderm and subsequently the gut does not form properly (Azplazu and Frasch, 1993). I could not find the exact origin of this gene name but the larval gut of bagpipe mutants vaguely resemble a bagpipe and historically, bagpipes were made using the stomachs of different animals.

Check out the Addgene website for plasmids that contain tinman or the mammalian homolog Nkx2.5. We also have one plasmid, Addgene plasmid 34260, that contains bagpipe from the Deplancke lab.

I hope you enjoyed this tour of Addgene’s new conference rooms and learned some fun facts about these genes and the origins of their names!