At Addgene, we love finding ways to incorporate science themes into our fun activities and Halloween is no exception. For the past 10+ years, Addgenies have formed teams, chosen a theme for the costume, and did their best to claim the costume contest trophy. We’ve had teams dressed up as plasmids, Blugene, and the Addgene ping pong table. 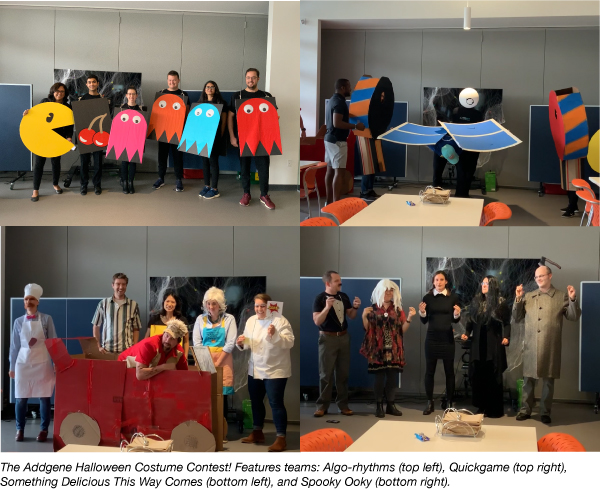 This year, in addition to the Halloween contest, we’ve also carved pumpkins (yes, Blugene made an appearance there too) and shared fascinatingly creepy science stories. Here are some of our favorite spooky science stories.

Ophiocordyceps unilateralis is a fungus that infects ants and controls their behavior. These ants become “zombies” and leave their foraging trail. They climb upwards until they reach a point where the temperature and humidity favors fungal growth. The ants bites down and locks their jaws into a leaf, and dies as its muscles atrophy. After the ant’s death, the fungal fruiting bodies being to sprout out of the ant’s body. The fruiting bodies then rupture and release spores onto the forest below for the next unsuspecting ant to stumble upon. 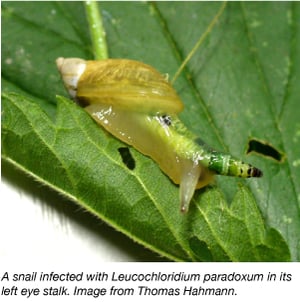 Leucochloridium is a parasitic worm that infects a snail’s eyestalks. Once ingested by the snail, the larvae reach the eyestalk and transform them into a pulsating display imitating a moving caterpillar. The worm controls the snail’s behavior, forcing it out of hiding to become exposed to predators. Hungry birds spots the “caterpillar” and then poke out the snail’s eyes and ingests the larvae. The adult worms develop in the digestive tract and release eggs in the bird feces, which get eaten by another snail, completing its lifecycle.

The Halloween genes are a set of cytochrome P450 genes discovered in Drosophila melanogaster (Gilbert, 2004). Mutations in these genes are lethal, associated with defective exoskeleton formations. These genes were appropriately named as spook, spookier, phantom, disembodied, shadow, and shade.

Cymothoa exigua is a marine parasite that enters fish through its gills. It attaches there until they mature and changes sex from male to female. Then, it detaches from the gills and latches onto the base of the tongue where it pierces the tongue and drains all the blood out. Once the blood is depleted, the tongue atrophies and falls off. The louse remains becoming the fish’s new “tongue” (Brusca and Gilligan, 1983). 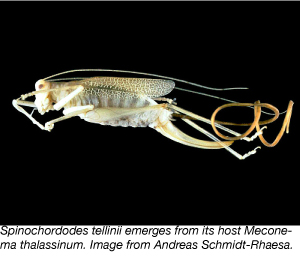 The parasitic worm Spinochordodes tellinii‘s larvae makes its home inside grasshoppers and crickets. When it’s ready to transform into an aquatic adult, it forces its insect host to dive into water. There, the worm emerges to find a mate, leaving the insect dead or dying in the water. It’s thought that the worm produces proteins which affect the grasshopper’s central nervous system: infected grasshoppers expressed different proteins in their brains compared to uninfected grasshoppers, including those linked to neurotransmitter activity and geotactic behavior (Biron et al., 2005).