Quick Guide to Working with Drosophila Part 1: Getting Started with Flies 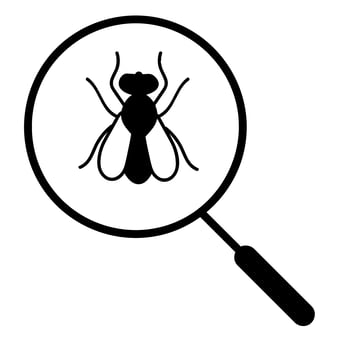 Do you have a gene of interest but have run into a wall trying to study it? It happens. Is it an evolutionarily conserved gene? Can you find an ortholog in the Drosophila genome? Continue reading and I’ll show you how Drosophila can be used to push your research in new and exciting directions.

Drosophila are very easy to manipulate genetically and have limited genetic redundancy (meaning, there’s more of a chance of seeing a phenotype since additional genes that can do the same function are less likely to exist). If there’s an ortholog of your favorite gene (YFG) in Drosophila (and even if there’s not!) the wealth of Drosophila genetic tools available allow you to study many aspects of your gene’s functional biology in a living organism. This is the first post in a three-part series. We’ll first discuss how to get started on fly work in this post. The second post will detail a major tool used by Drosophila geneticists (the Gal4/UAS system), and the third post will describe how you can make your own mutant flies.

The birds and the bees when it comes to fruit flies

Drosophila start life as fertilized eggs that develop into embryos and then become larvae. There are three larval stages where larvae molt in order to continue growing in the next larval stage. After the third larval stage, Drosophila will pupate, which takes about one week from the initial deposition of the fertilized egg by its mother. Inside the pupal case, the larva will metamorphose into its adult form. In all, it takes roughly 10 days for an egg to develop and emerge as an adult fly at 25°C. At low temperatures like 18°C, flies take longer to develop. At high temperatures like 30°C, flies develop faster but are also more stressed by the heat. 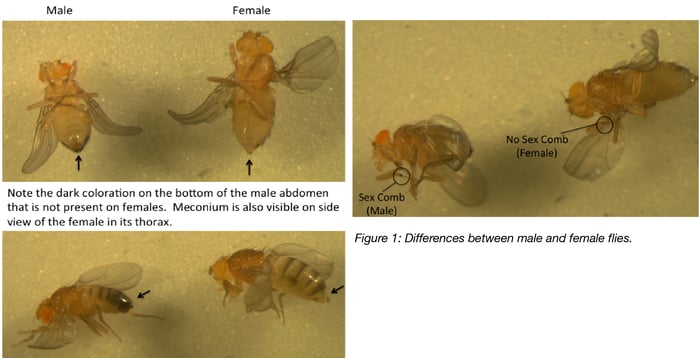 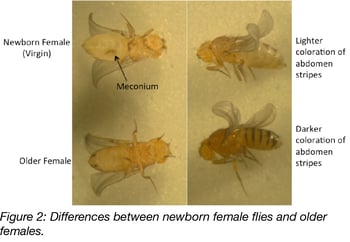 To make genetic crosses properly, it is important to isolate females from males while they are still virgins. Females begin mating ~6 hours after hatching into their adult phase. It is important to clear out the parent crosses from the container before the progeny begin eclosion, the process of hatching from their pupal case (~9 days after setting up the genetic cross). You can tell when pupae are ready to hatch the next day because the pupae will develop a visible dark spot. Pupae begin eclosion at the start of the day and throughout daytime. They mostly stop emerging at night. An incubator with a light cycle makes for very predictable work!

When flies first emerge, their bodies will be very light in coloration and can look very plump. On the side of their abdomen will be a dark spot. This is meconium (in other words, newborn poop) visible through their translucent bodies. This is the ideal stage to select for females because you can be certain that they are too young to mate. Using various markers (more on that below), you can select for progeny with the correct genotype for further crosses.

Animals are diploid except for their germ cells (sets of genomic material are contributed by mother and father). While some mutations can remain stable as homozygous alleles, others cannot. Geneticists need a method for maintaining stable lines of genetic mutants, including in situations where maintaining heterozygosity is necessary and genetic recombination can potentially cause you to lose track of your mutation. To maintain stable lines of flies carrying a specific mutation, Drosophila geneticists use balancer chromosomes to prevent genetic recombination. Balancer chromosomes essentially are messed up chromosomes with multiple inversions. They are unable to participate in genetic recombination during meiosis. Also, flies are not viable if they are homozygous for a balancer chromosome. Thus, you can stably maintain a heterozygote, and the mutation won’t drift away with each passing generation.

Another feature of balancer chromosomes is that they produce dominant phenotypes visible on the flies. For example, second chromosome balancers often have the curly O (CyO) allele, which causes flies to have curled wings. Third chromosome balancers can have an allele that causes the hairs on the dorsal side of its thorax to look like stubble (sb). For a better reference of various fly phenotypes, check out the Classical Genetics Simulator website.

One interesting thing to know is that males do not recombine chromosomes during meiosis. This can sometimes be a handy feature when setting up genetic crosses. More importantly, this knowledge will stop you from embarking on a fruitless journey of trying to get males to recombine two mutations onto the same chromosome. You should use females for that.

Now you have the basic knowledge to start working with flies. Like Addgene, the Drosophila community is highly sharing-oriented, and there are many resources to help you learn more about fly biology and fly-based experimental systems. Some resources will direct you to the latest information about gene function, while others offer fly stocks and other reagents. If you’re ever confused about the best way to study YFG in flies, there is likely an easily accessible resource out there to help keep your research moving. Below, you’ll find some great introductory resources. As you dive deeper into Drosophila research, you’ll find more resources that may be more tailored to your field of study.

5 great resources to help get your fly work started

In the next post, you’ll learn the fundamentals about how many of these resources work.