This post was contributed by guest blogger Daria Shcherbakova, a faculty member at Albert Einstein College of Medicine.

Several sets of near-infrared fluorescent proteins (NIR FPs) and biosensors have been created recently. As developers of many of these probes, we decided to write this quick guide to help researchers choose the probe for their needs. You’ll find basic information on NIR FPs, their properties and applications. At the end, there is a Table that summarizes the properties of state-of-the-art probes, many of which you can find at Addgene.

Near-infrared fluorescent proteins (NIR FPs) were derived from natural photoreceptors incorporating biliverdin IXα (BV) autocatalytically. Fortunately for probe developers and users, BV is present in eukaryotic cells as an intermediate of heme metabolism (Shemetov et al, 2017). Modern state-of-the-art NIR FPs can be used similar to GFP-like probes by supplying a single gene to cells. Still in bacteria, which do not produce BV, an additional gene coding for heme oxygenase should be supplied (Baloban et al., 2017).

It is important to consider effective brightness of NIR FPs in cells, in addition to their molecular brightness (a product of the fluorescence quantum yield and the extinction coefficient) (Shcherbakova et al., 2015). The effective brightness reflects the concentration of BV-containing molecules in a cell and depends on the efficiency of BV incorporation by an apoprotein and protein expression level. State-of-the-art FPs (listed in Table 1) were optimized for efficient binding of endogenous BV.

When imaging NIR FPs, consider using light sources that produce enough light intensities in NIR. Usually, mercury lamps are suboptimal, metal halide lamps are better, and xenon lamps are the best for working in this spectral range. You can also check that no filters and/or cold mirrors block the NIR light coming from your source and to your camera.

Multiple uses: From multiplexing to multiscaling

NIR-shifted spectrum is perfect for use in spectral multiplexing (Shcherbakova et al., 2018). NIR FPs can be combined with blue-light controlled optogenetics, such as channelrhodopsins and tools based on light-oxygen-voltage (LOV) domain. They can also be used in crosstalk-free three-color imaging with green and red GFP-like FPs (Shcherbakova et al., 2016), as well as in four-color imaging (cyan, yellow, red, and near-infrared) (Qian et al., 2019).

NIR FPs are useful in vivo probes, due to low autofluorescence, low scattering, and deep penetration of red-shifted light. The same NIR FPs and biosensors can be imaged at spatial scales from sub-cellular to whole-body in small animals, such as mice (Matlashov et al., 2020).

Enhanced miRFPs are monomeric and bright

There is a whole set of spectrally distinct (e)miRFPs available. The numbers in (e)miRFP names correspond to the maxima of their emission spectra. These probes can be combined in two-color and multicolor NIR imaging.

A separate class of NIR FPs, named miRFPnanos, were derived from cyanobacteriochrome (CBCR) photoreceptors (Oliinyk et al., 2019). They were engineered to incorporate BV. Their advantages are their small size (17 kDa for miRFPnanos, 35 kDa for miRFPs, and 27 kDa for EGFP) and a possibility to be used as internal tags due to the proximity of the N- and C-termini. Latest miRFPnanos9 do not yield to (m)iRFPs in cellular and molecular brightness (Table 1).

State-of-the-art NIR FPs, which combine high cellular brightness and monomeric state, are highlighted in blue. aExtinction coefficient. bQuantum yield. cDetermined in mammalian cells. dDetermined as effective NIR fluorescence in transiently transfected live HeLa cells with no supply of exogenous BV and after normalization to fluorescence of co-transfected EGFP. e Originally reported as a monomer16, IFP2.0 was later found to be a dimer3,15. ND-not determined in parallel assays with other FPs.

We hope that this post helps you in getting to know the state-of-the-art NIR fluorescent probes and in choosing the perfect one for your experiment! 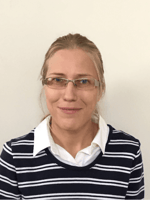 Daria Shcherbakova is a faculty member at Albert Einstein College of Medicine. Her expertise is development and applications of fluorescent proteins, genetically encoded biosensors, and optogenetic tools. Follow her recent research @daria_gift_shch.